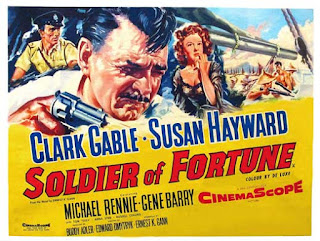 Soldier of Fortune is a movie I’d never even heard of until now, which is odd since this 1955 20th Century-Fox adventure romance seems to be a fairly big-budget production with a couple of A-list stars (Clark Gable and Susan Hayward).

Jane Hoyt (Susan Hayward) arrives in Hong Kong. She is looking for her husband. He’s a photojournalist who decided there would be a great opportunity for a story in China. Unfortunately he didn’t bother to get permission to enter the People’s Republic and since he departed from Hong Kong no-one has heard anything of him. Both the British authorities in Hong Kong and the American consul have made enquiries but have hit a brick wall. Mrs Hoyt is however a woman who does not give up easily.

There is one person in Hong Kong who might have the kinds of connections that Mrs Hoyt needs to uncover the truth about her husband’s fate. That man is Hank Lee (Clark Gable). Inspector Merryweather (Michael Rennie) assures Mrs Hoyt that Hank Lee is a smuggler and in fact little more than a gangster, albeit a very successful one and one who is careful not to do anything illegal in Hong Kong itself.

Hank Lee is willing to help Jane Hoyt to get her husband out of China, but his motives are rather complicated. He’s fallen for Jane in a big way but he wants to win her fair and square which means he has to rescue her husband. Then she can choose, either Hank or her husband.

The plot takes a while to reach top gear. There’s a lot of time spent on Mrs Hoyt’s misadventures in Hong Kong as she tries to discover the facts about her husband without Hank’s help and there a fair bit of time spent on Hank’s disreputable cronies who provide some comic relief. The romance angle between Mrs Hoyt and Hank also starts to develop. Jane really is not quite sure what she’s doing. Hank has swept her off her feet but she’s not prepared to take the step of walking away from her marriage. She wants to be loyal to her husbands but she wants Hank as well and obviously she can’t have both. Hank is just as conflicted. He really does want her but he’s determined to be honourable about it. For a crook he’s remarkably moral and he’s also a bit of a soft touch.

Finally however it is going to be necessary to take some pretty risky steps to rescue that missing husband. It’s a bit of a harebrained scheme and Inspector Merryweather is not the sort of man to get mixed up in such nonsense but nonetheless he does get mixed up in it.

Ernest K. Gann adapted the screenplay from his own novel. The screenplay seems to be the big problem. It’s unfocused and it takes too long to get to the action, and the romance doesn’t really sizzle since both Hank Lee and Jane Hoyt are holding back trying not to get too involved. So it’s an adventure romance but it doesn’t have enough adventure and it doesn’t have enough romance. The chemistry between Gable and Hayward is almost there, but not quite. The most interesting part of the movie is the uneasy friendship between Hank and Inspector Merryweather with Gable and Michael Rennie working very well together.

Gene Barry plays the missing husband and unfortunately doesn’t get a great deal to do.

The Hong Kong location shooting is very impressive. The movie was shot in Cinemascope and in colour. This is certainly a very handsome movie.

For me the best thing about the movie is the evocation of a lost world. Hong Kong under British rule, the whole expatriate thing with Europeans slowly going to seed in the tropics, it’s a strange, exotic and glamorous world and it’s all gone now.

The Region 4 DVD is barebones but offers a good anamorphic transfer.

Soldier of Fortune had plenty of potential but the surprisingly flabby script lets it down a bit and director Edward Dmytryk doesn’t quite manage to generate enough of a spark to ignite the story. It does look great and the acting is very good and it’s reasonably entertaining so it’s worth a rental.

It's interesting to compare this one with Lady of the Tropics, with similar settings and vaguely similar themes. Neither film is a complete success but both are of interest.
Posted by dfordoom at 9:11 PM