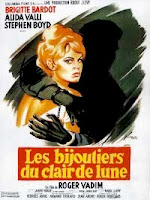 Brigitte Bardot made some decidedly quirky movies during her career, movies that often don’t fit neatly into genre pigeonholes. The Night Heaven Fell (Les bijoutiers du clair de lune) came out in 1958 and at first it seems like it’s going to be a fairly light-hearted romance. It doesn’t take long before it takes a much darker turn.

Ursula (Bardot) is an innocent young girl fresh from convent school and eager to discover love. She’s spending some time with her aunt and uncle in Spain. The uncle, Comte Miguel de Ribera (José Nieto), is something of a lecher. In fact he has just been responsible for driving one of the village girls to drown herself in the well. This has earned him the enmity of the girl’s brother Lambert (Stephen Boyd). The comte also has a sadistic streak combined with ruthlessness and a certain degree of physical cowardice.

Ursula doesn’t think much of her uncle right from the start and she thinks even less of him when he tries to ravish her.

Ursula has stumbled into a web of romantic intrigues and she’s somewhat bewildered. The rising tensions end in murder and the murder is complicated by betrayal and Lambert finds himself on the run from the police, accompanied by Ursula.

So this is now definitely a couple on the run movie, but it’s not the kind of couple on the run movie that you would get from a Hollywood film-maker (or even a British film-maker for that matter). There’s no action. There’s a growing sense of entrapment though - we feel that Lambert and Ursula are unlikely to escape in the long run. The odds just seem to be stacked against them.

The Night Heaven Fell is a million miles away from film noir in style but when it comes to the content there is a definite film noir feel. Lambert is not a bad man and he doesn’t deserve to be hunted down like an animal. He makes some poor decisions and fate is against him and he’s not a strong enough character to resist his fate. Ursula cannot avoid her fate either - she has chosen to pursue love even if it leads her to destruction.

The film also has a certain affinity to the western genre, which may perhaps be due more to the scenery than anything else.

By the time Roger Vadim directed this film he and Bardot had already divorced although they would go on to make several further movies together.

Almost nobody has a good word to say about Roger Vadim as a director. One can’t help feeling that many critics disapprove of Vadim himself so much that there is no way they are ever going to be able to view his movies in an unprejudiced manner. And why is Vadim so disapproved of? Partly because he was essentially a non-political film-maker in an era in which critics were increasingly besotted by political film-makers. He made movies that looked gorgeous, in an era that increasingly worshipped ugliness and squalor. He made movies that took an unashamed joy in female beauty, in an era in which sex and nudity were considered by critics to be fine as long as they were treated in a suitably sleazy manner. Vadim seemed like a dinosaur, and even worse a dinosaur who believed in beauty and romance.

Vadim’s movies are certainly uneven but they’re often odd and interesting, such as the rather wonderful Please, Not Now (1961) and the intriguing psycho-sexual melodrama Love on a Pillow (1962). Both of which incidentally starred Bardot.

The Night Heaven Fell benefits from some gorgeous location work in Spain. This is quite a stunning movie. The Spanish setting not only looks great but it works.

I have a definite soft spot for Brigitte Bardot. She was at her best in romantic comedies but was willing to take on more serious roles. Her quirky performances tend to be most successful in films that are themselves slightly quirky.

Alida Valli adds the right touch of thwarted passion as the aunt. Stephen Boyd is quite good - he’s often dismissed as wooden but his detached performance conveys the essential fatalism of his character.

I personally enjoyed The Night Heaven Fell quite a bit but it’s a movie that I’m hesitant to recommend. Vadim is an acquired taste and this movie is very much one that you’re either going to love or hate, and I’d have to be honest and admit that most people will hate it. There’s a kind of existential emotional detachment to it which will annoy many viewers. It’s also a movie that can be (and has been) lambasted for its lack of realism. I’m inclined to think that the unrealistic feel is deliberate - that it’s aiming at a mythic or even a fairy tale quality. This is most assuredly not a conventional action-packed couple on the run thriller - it’s a man and a woman lost in the wilderness with a donkey and a pet piglet. There is unquestionably quite a bit of religious symbolism in this story. I think it’s an extremely interesting movie but your mileage might vary very considerably!

The Night Heaven Fell was released on DVD in Region 1 but the disc seems to be a bit hard to find these days. I can’t comment on the disc quality since I caught this movie on television (luckily in a rather nice letterboxed print).
Posted by dfordoom at 10:37 PM