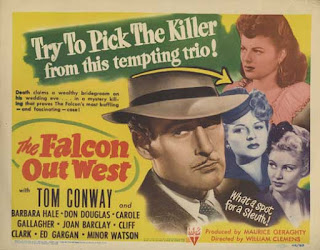 The 1940s was the great era for B-movie crime series, like The Saint and The Falcon movies. There were also the Boston Blackie movies, although so far I have never managed to track down any of them. The Falcon Out West, dating from 1944, was my first exposure to a Falcon movie, and it was a generally painless experience.

The Falcon series started out with George Sanders as the title character, but his brother Tom Conway later took over the role. Poor Tom Conway, who really never did escape his reputation as the poor man’s George Sanders.

The Falcon is, like The Saint, one of those mysterious amateur crime-fighters with an ambiguous relationship with the police. Not a private eye exactly, more of an amateur who solves crime as a sort of hobby. 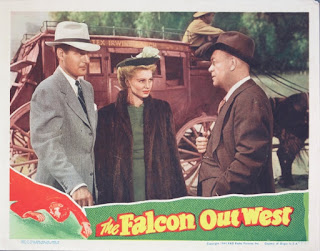 In this case a wealthy Texan rancher (named Tex apparently on the assumption that all Texans are probably named Tex) is killed by a rattlesnake bite. Not overly surprising you might think, but dying of a rattlesnake bite in a swanky 1940s New York night-club is definitely unusual. Murder seems the obvious explanation. There are of course several obvious suspects. There’s Vanessa Drake, the young woman he was about to marry. He’d just signed most of his fortune over to her as a wedding present. And she does have a reputation as being a bit of a good-time gal.

There’s also the embittered ex-wife. And the equally bitter business partner, with whom Tex had been quarreling for years. And the former business partner’s beautiful daughter. So The Falcon, more at home in the bright lights of the big city, finds himself on a Texas ranch as he tries to unravel the mystery. There are various hazards - hostile Comanches (yes this is 1944 so hostile Comanches do seem a bit odd), angry cowboys, rattlesnake, wild horses, and of course no-good dames. This being a 1940s American crime movie we realise immediately that the no-good dames are going to be the biggest danger. Fortunately the Falcon has plenty of experience in this area. 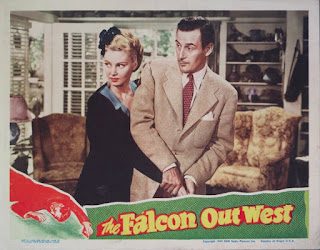 The movie’s greatest strength is that it knows it’s a B-movie and has no pretensions whatsoever to being anything else. It has one goal, which is to provide just over an hour of reasonable entertainment. It does this pretty successfully, with the tried and tested formula of murder, complicated conspiracies involving inheritances, a bit of action, a hint of romance, and of course the aforementioned beautiful dangerous women. And this one has no less than three beautiful dangerous women!

Although comic relief is a inescapable but unpleasant fact of life in American genre movies of the 30s and 40s at least in this film it isn’t overdone and it isn’t too annoying. 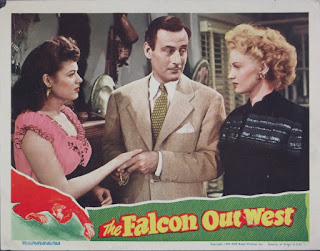 Tom Conway is charming and debonair, makes the police look like fools, and of course solves the mystery. Its one departure from formula is that it throws in some western cliches as well as the standard crime movie cliches. Director William Clemens isn't tempted to try anything fancy but he keeps things moving along at a good pace.

It’s harmless lightweight fun and as long as you’re not expecting anything ground-breaking or profound it should provide sufficient enjoyment to keep crime B-movie fans happy. The Falcon Out West is recommended.
Posted by dfordoom at 3:38 PM