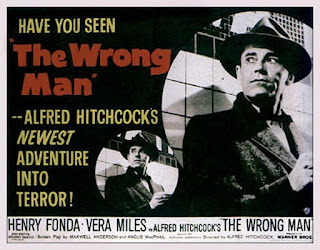 The Wrong Man is definitely not a typical Alfred Hitchcock film. There are very few visual flourishes. This 1956 Warner Brothers production is a very stark movie, filmed in black-and-white and looking a little like a documentary or a neo-realist film. In fact of course every image is as calculated and controlled as every other image in Hitchcock’s movies – the spontaneity and the element of chance that are the essence of documentary and neo-realism were anathema to Hitchcock. But it has the look of neo-realism and that look works for this film.

The Wrong Man is the story of a musician (Manny Balestrero, played by Henry Fonda) who is falsely accused of a series of robberies. Coming from Hitchcock you might therefore expect something along the lines of The 39 Steps, though, with the protagonist dashing off across the countryside in pursuit of the real criminal with the police hard on his heels. What you get is something quite different. There is no action at all. No chases. The first half hour simply follows Manny’s life an establishes him as the archetypal regular guy – quiet, sober, a devoted husband and father, a man so law-abiding and inoffensive that he’s probably never even had a parking ticket. 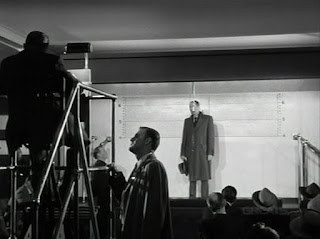 The next half hour shows Manny’s world coming into collision with the nightmare world of crime and the legal system. He finds that the system is not interested in him as a human being – he is simply processed through the system. It’s not as if the cops are brutal and dishonest – they’re too indifferent for that, they simply don’t see him as an individual, and they simply don’t care.

The rest of the film follows the progress of Manny’s case, which has been taken on by lawyer Frank O’Connor (played by Anthony Quayle), and it also follows the gradual mental breakdown of his wife Rose (Vera Miles) under the strain. 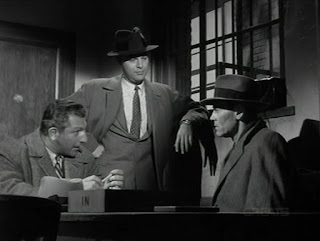 This movie is, visually, very film noirish – lots of shadows, and lots of high-contrast shots, lots of shots down hallways and stairways, high-angle shots, everything that is conducive to making a film that is uncomfortable and unsettling and paranoid. Even the scenes of Manny’s home life are rather stark. Hitchcock is determined to create an uncomfortable atmosphere and to sustain it relentlessly.

There’s no comedy at all in this movie. Just as Manny and Rose find no escape from the remorselessness with which fate seems determined to crush them, so the viewer gets no escape either. 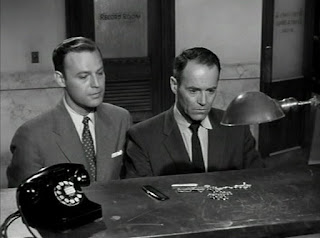 Vera Miles is superb as Rose – she never pushes her performance too far.  Henry Fonda (an actor I’m afraid I’ve never liked) is about as perfectly cast as it’s possible for an actor to be.

This is one of the few movies in which Hitchcock deals directly with his Catholic faith, but the religious elements certainly don’t overpower the story.

Given Hitchcock’s own loathing of the police it’s reasonable to surmise that this was a rather personal film for him! 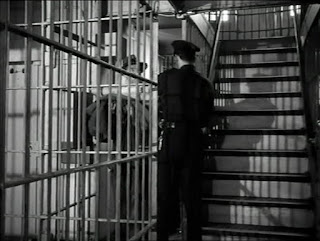 The Wrong Man is a somewhat gruelling film to watch, but it works extremely well. It makes its point about the ease with which an innocent person can have his life completely shattered by a false accusation, and can find himself overwhelmed by a nightmare half-world of crime that he was scarcely aware even existed.  t’s not really a suspense film – it’s more concerned with the effect of the events on those involved.

The Wrong Man is one of Hitchcock’s more underrated films. It’s a very compelling and very powerful film. Highly recommended.
Posted by dfordoom at 5:36 PM