Dames Don't Care (original title Les Femmes s'en balancent, also released as Dames Get Along) was made in 1954 and was the third of the Lemmy Caution movies. Bernard Borderie wrote and directed this film (as he did several others in the series).

Lemmy Caution was created by English novelist Peter Cheyney. The books were particularly popular in Europe and the first of the long series of French Lemmy Caution movies, Poison Ivy, appeared in 1953. The movies are on the whole better than the books.

Only one actor has ever played Lemmy Caution - American-born Eddie Constantine. Constantine had established himself as a fairly popular singer in France but the Lemmy Caution movies made him not just a movie star but a minor cultural icon.

Lemmy Caution is an FBI agent but all his cases seem to take him to Europe. It seems like he spends very little time in the United States. This case takes him to Italy.

The very clever opening sequence shows Caution making contact with another FBI agent. The case involves a very large amount of counterfeit U.S. currency which first came to the attention of the Italian authorities when the glamorous Henrietta Aymes (Nadia Gray) tried changing one of the forged notes at a bank in Rome. Henrietta’s husband Granworth committed suicide at about this time, or at least it looked like suicide at the time. When the eyewitness, a night watchman, changed his story it started to look a lot less like suicide. 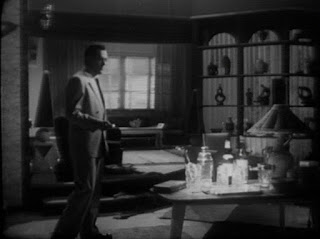 Much of the action centres on the Casa Antica, a fancy bar and illegal gambling joint. Henrietta Aymes is a regular there. Lemmy is confident he’ll pick up a lead if he sticks around a place like this long enough. In the meantime there's whiskey to be drunk and poker to be played.

Henrietta Aymes is obviously a classic femme fatale but she’s not the only one. Paulette (Dominique Wilms) is femme fatale number two. And they’re both terrific sexy bad girls. Both have plausible motives for murdering Granworth Aymes. There’s a complex, twisted and dangerous web of romantic and criminal relationships involving Henrietta and her husband and Pauline and her husband. 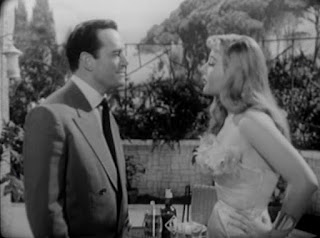 The plot turns out to be rather intricate and it’s reasonably satisfying. Lemmy’s methods are generally not very subtle but he does have to puzzle out some actual clues this time. That still leaves plenty of time for fist-fights (some of which are pretty good). There’s also at least one decent action set-piece.

This movie is very much in the style of the classic American hardboiled private eye movies of the 40s. And it captures that flavour perfectly. There’s a leavening of humour but mostly it’s played fairly straight. The late Lemmy Caution movies, beginning with Godard’s Alphaville, may have been busily trying to deconstruct the genre but that’s definitely not the case with the early movies made between 1953 and 1963. This was a period when the French were still totally in love with American pop culture. 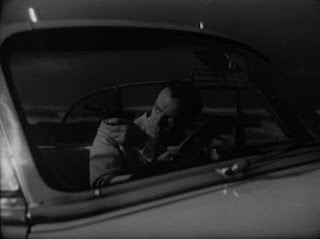 The settings are interesting. None of the action takes place in major cities. It all takes place in what appear to be desert settings, with stark modernist buildings seemingly in the middle of nowhere. I suspect the film-makers, having seen so many American movies set in California or in desert settings, were trying to create that same kind of atmosphere. Especially with Lemmy driving around in his big American convertible. The Casa Antica set is rather impressive. Stylistically it’s a pretty interesting movie.

If you’re the sort of person who is put off by dubbed movies you don’t have to worry about this one. The English language dubbing is excellent, and the English version includes some truly wonderful hardboiled dialogue. 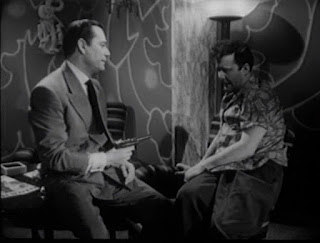 Compared to Poison Ivy, made a year earlier, Dames Don't Care is a bit more polished and Eddie Constantine is now entirely comfortable in the rôle and he’s superb. Constantine’s Lemmy Caution is one of the screen’s classic wise-cracking hardboiled tough guys.

Nadia Gray and Dominique Wilms (who had also appeared in Poison Ivy) do the femme fatale thing and they both do it extremely well.

As far as I am aware the only way to get the Lemmy Caution movies is on DVD-R from Sinister Cinema. In the case of this film the image quality is quite OK. Sound quality is not so good with a fair bit of hiss but fortunately the dialogue is all perfectly understandable.

Dames Don't Care is stylish entertainment with generous helpings of both wit and action. Highly recommended.
Posted by dfordoom at 10:49 PM