Sexton Blake and the Hooded Terror (1938) 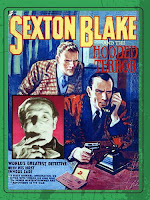 Sexton Blake and the Hooded Terror was the third and last of the low-budget British movies made in the 1930s featuring master detective Sexton Blake.

In fact it probably qualifies as a quota quickie, quota quickies being very cheap movies that took advantage of British government legislation that forced exhibitors to show a quota of British-made movies. These movies are often unfairly despised. Some were terrible but many were good entertaining films.

Sexton Blake was a kind of pulp version of Sherlock Holmes (he even lived in Baker Street). He made his first appearance in 1893, in a story by Harry Blyth. Countless further stories followed (possibly as many as four thousand) and were published in a variety of cheap British magazines. The stories were written by many different writers (including some like John Creasey and Peter Cheyney who later became fairy well known). Blake has a youthful assistant named Tinker. The Sexton Blake stories range from very very good to very very bad.

One key difference between the Sherlock Holmes stories and the Sexton Blake stories is that the latter usually pitted the detective against one of a number of colourful diabolical criminal masterminds.

George Curzon plays Blake in this particular movie. He’s suave enough although he’s not going to convince anybody that he’s an action hero. As played by Curzon Blake has more of an air of a debonair man-about-town than Holmes, and he’s definitely much less neurotic. 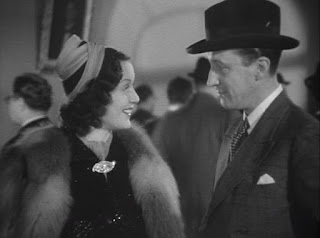 The villain is played by the legendary Tod Slaughter. Slaughter was not merely in the tradition of Victorian melodrama villains. He was a real Victorian melodrama star. OK, if you want to be pedantic his career began in 1905 so he was actually an Edwardian melodrama star but he was an authentic representative of the tradition. He made a series of deliciously outrageous low-budget movies during the 30s and 40s. Tod Slaughter in full cry makes Charles Laughton seem positively restrained. Slaughter was perhaps the hammiest movie star of all time. Most of his best movies (such as Murder in the Red Barn and Sweeney Todd: The Demon Barber of Fleet Street) were adaptations of Victorian melodramas.

In Sexton Blake and the Hooded Terror he plays diabolical criminal mastermind Michael Larron. By ordinary standards it’s an over-the-top exercise in hamminess but by Tod Slaughter standards this is a very subdued and subtle performance.

Tony Sympson plays Tinker. You might expect Tinker to be a comic relief character but he isn’t. He’s a reasonably competent and resourceful assistant. 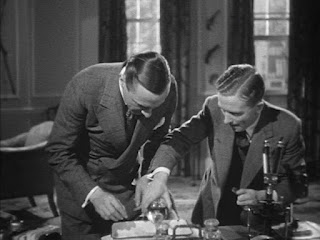 It all starts with an attempted murder somewhere in the East. Granite Grant has a narrow escape from death, but he is grievously wounded and will be unable to keep a vital appointment with Sexton Blake in London. He sends Paul Duvall in his place. Duvall is murdered and the only clue that Blake has is a message written in cipher.

Grant was apparently on the track of the master criminal known as the Snake, believed to be the head of the dreaded organised crime gang the Black Quorum, a gang responsible for most of the really big crimes in Europe and Britain. There’s an obvious parallel here to the criminal organisation run by Sherlock Holmes’s nemesis Professor Moriarty.

Blake’s first encounter with the Snake is at a stamp auction. Sexton Blake is a keen philatelist, as is the villainous Michael Larron. At the auction Blake renews his acquaintanceship with the glamorous Mademoiselle Julie (Greta Gynt). Mademoiselle Julie seems to be in the same line of business as Sexton Blake, working sometimes as a freelancer and sometimes for the Sûreté. 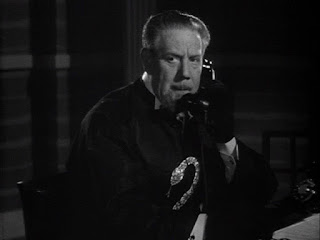 The story is not exactly a masterpiece of plot construction but that matters little since it’s really just an excuse for pulp thrills and for the hero to find himself in lots of perilous situations from which there seems to be no escape. In at least one case there really would have been no excuse had Mademoiselle Julie not been on hand to rescue the great detective, a favour he is later able to repay.

There are some nice visual touches, such as the scene that awaits Blake in the gambling salon. The atmosphere is very pulpy and there’s every old-fashioned thriller cliché you could hope for, from deadly blow guns to doped cigars to concealed trap-doors. 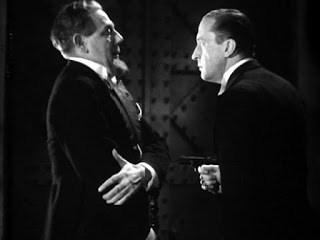 This is very much in the mould of Edgar Wallace. Which from my point of view is certainly no bad thing.

This movie is one of six in VCI’s British Cinema Classic B Film Collection Volume 1 boxed set. The transfer is acceptable although far from pristine. The source material was obviously a TV print. These are very obscure movies so we’re lucky they’re available at all, and at a very reasonable price.

Sexton Blake and the Hooded Terror is obviously a must-see for Tod Slaughter fans but anyone with a taste for outrageous pulpy fun should find plenty here to enjoy. It’s outrageous fun. Highly recommended.
Posted by dfordoom at 2:54 PM