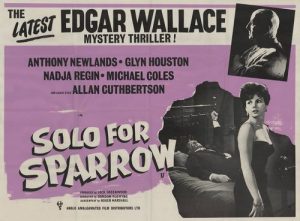 It starts with a clever robbery of a jeweller’s shop. The gang kidnaps an elderly female employee whose job it is to lock up at night. She and the owner are the only ones to have keys to both the front door and the safe. A good plan, if only the old lady hadn’t died on them. Now it’s a murder case.

It’s Inspector Sparrow’s case but maybe not for long. His superior, Superintendent Symington, intends to call in Scotland Yard. Sparrow decides to take some leave, although what he really intends to do is to break the case before the Yard can. Like most local detectives he’s somewhat resentful of the way Scotland Yard ends up getting all the glamour. This is a local crime, Sparrow knows the ground and he knows all the local villains. He can see no reason why he shouldn’t solve the case on his own. 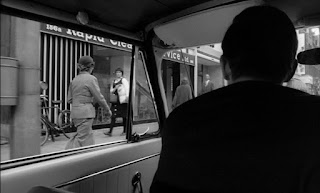 It doesn’t take Sparrow long to pick up the scent. There are a couple of elements in the robbery that excite his curiosity a great deal. Sparrow’s methods are sound but perhaps not entirely conventional. Or it might be more accurate to say, not entirely legal. Wire-tapping is definitely not permitted without Home Office approval but what the Home Office doesn’t know won’t hurt them.

It’s all part of a trap Sparrow intends to lay (he can lay the trap because he already has a fair idea of the identity of at least one of the gang members). Of course there’s always the possibility the gang will lay a trap for Sparrow. This is a pretty ruthless gang. 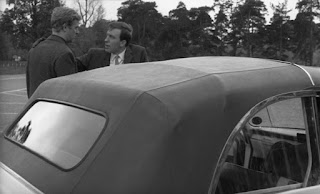 This is a straightforward crime story with no sensational twists (although the method by which Sparrow extricates himself from one very nasty situation is ingenious). Sparrow just follows the leads he has then puts on the pressure in the hope that one of the gang members will crack, which of course is probable given the fact that murder was involved and the authorities are going to be wanting to hang someone for that.

Glyn Houston plays Sparrow. Houston was one of those thoroughly reliable British actors who could play parts like this in their sleep. He does a fine job. Sparrow is a sympathetic character but he’s a bit of a chancer. Both his career and his love life are at a bit of a crossroads. His love life problem could be easily solved if friendly local barmaid Sue was given half a chance. She doesn’t even mind being dragged along when Sparrow is on the job - surely a perfect candidate to be a policeman’s wife. 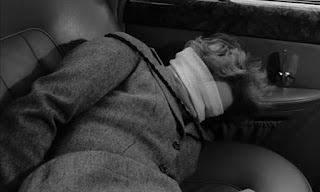 Anthony Newlands oozes oiliness as the jeweller Reynolds. Nadja Regin adds some glamour as Reynolds’ wife. Allan Cuthbertson, one of my absolute favourite British character actors, puts in an appearance as Sparrow’s superior officer. Look out for Michael Caine in a minor rôle. Cult TV fans will enjoy seeing William Gaunt (from The Champions) as Sparrow’s sergeant and Wanda Ventham (Colonel Lake from UFO) in a bit part.

Director Gordon Flemyng worked mostly in television. There’s nothing spectacular about the job he does here but he keeps the action moving along. Roger Marshall, who had a very distinguished career as a television writer, provided the very serviceable screenplay. 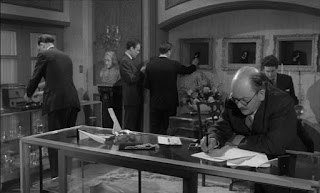 This movie is included in Network’s Edgar Wallace Mysteries volume three DVD boxed set. These sets are an absolute must for British B-movie fans. The 16:9 enhanced transfer is excellent.

Solo for Sparrow is decent if routine entertainment. Not one of the better movies in this cycle but the strong cast is a definite bonus. If you’re going to buy the boxed set anyway (and you should) then it’s worth giving this one a spin if you don’t set your expectations too high.
Posted by dfordoom at 5:09 PM