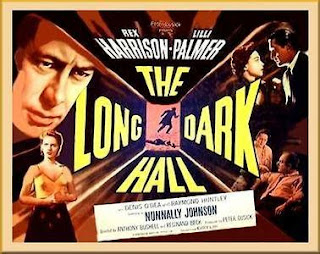 The Long Dark Hall is a 1951 British crime thriller.

Arthur Groome (Rex Harrison) is a hardworking bookkeeper and a devoted family man He’s a model of suburban respectability. Well, except for one thing. He’s having an affair with a showgirl named Rose Mallory. When Rose is murdered he finds himself in a very sticky situation. There is a certain amount of circumstantial evidence against him.

Arthur’s wife Mary (played by Harrison’s real-life wife at the time Lilli Palmer) has forgiven him for his dalliance with the showgirl and she’s one of those people who think that if you’ve done nothing wrong you have nothing to fear from the police. She thinks the criminal justice system is fair. Perhaps she believes in Santa Claus as well. The fact is that the police have a suspect and they want a result and they see no reason to look any further. A result is a result. 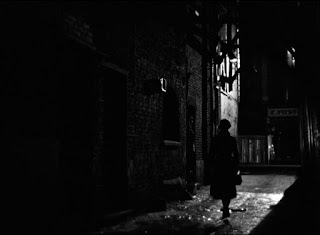 This is one of those countless movies that hinges on the accused person behaving foolishly. Had Groome told the truth at the outset and thrown himself on his wife’s mercy she would have forgiven him. She forgives him anyway. But he didn’t. He told some clumsy lies which now make him look guilty. Very guilty indeed. Now eve his innocent actions look guilty.

The viewer knows from the start what really happened so this is more a suspense movie than a mystery. The viewer also knows that the story is far from over. There was an earlier murder and there may be another one. We also know of the existence of a vital witness. Groome knows of the witness’s existence as well, as does his defence counsel. But Groome can’t for the life of him remember the man’s name. And what has become of this crucial witness? 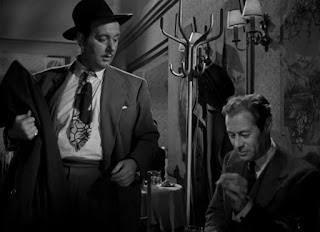 Rex Harrison was good at playing charming cads. In this film he’s not quite so much of a cad, more a weak self-indulgent man who thinks he can have a wife and a mistress. He’s really not a bad man, he’s a nice guy basically. He’s not very admirable but how many of us have our little weaknesses? His wife isn’t really worried by the idea that her husband might occasionally succumb to the temptation to chase skirt. As long as he still loves her she doesn’t mind very much. The awkward thing is that Groome was head-over-heels in love with Rose Mallory. It’s not that he’d stopped loving his wife. He just thought he could love both women.

The challenge for Lilli Palmer was to make Mary a woman who was prepared to tolerate a straying husband without making her seem like a victim or making her seem pathetic. She manages it fairly well. She convinces us that Mary is a strong woman who is prepared to accept male weaknesses. What she is not prepared to do is to give up on her husband or her marriage. Arthur and Mary Groome are the key characters and it’s the performances of Harrison and Palmer that matter and they deliver the goods. 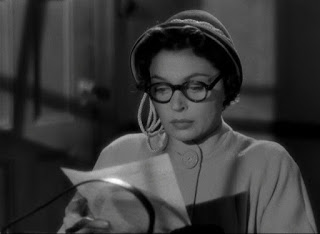 Of the supporting cast it’s Eric Pohlmann who stands out (as this wonderful character actor always did) as the all-important witness. Anthony Dawson and Brenda de Banzie are also memorable is small but key rôles.

The movie was based on a novel by Edgar Lustgarten, also noted as an author of true crime books and with a reputation for having a very sound knowledge of the English criminal justice system. Much of the plot hinges on the question of the reliability of circumstantial evidence. Without circumstantial evidence many murderers would go free but the problem is that it can never be entirely conclusive. By its very nature it can only point to someone as the likely criminal. The movie makes this point pretty well. The evidence against Groome seems damning but there’s not a single point of evidence that couldn't have an innocent explanation, however unlikely. Without a confession you can never be entirely certain, and while Groome is prepared to admit to behaving reprehensibly in many ways he absolutely insists that he is innocent of murder. 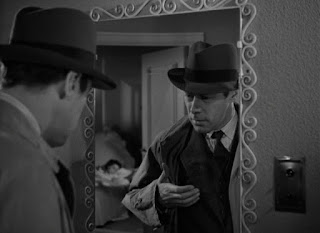 The problem with this movie is the ending. It’s not that I disagree with the way they ended it, but it’s very abbreviated. Just as things seem like they‘re about to get really exciting, it ends. And nothing really feels resolved. Maybe they just ran out of money, but there were several missed opportunities at the end.

Network’s DVD is what you expect. No extras but a very good transfer at a reasonable price.

The Long Dark Hall is mostly a gripping crime thriller and a trenchant and effective criticism of the criminal justice system, with fine and subtle performances by Harrison and Palmer. It could have been a very good movie indeed. It’s still pretty good. It could easily have earned a highly recommended rating but as it it’s still recommended.
Posted by dfordoom at 4:58 PM