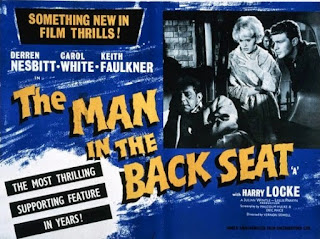 The Man in the Back Seat is included in Network’s Edgar Wallace Mysteries Volume Five boxed set but not only is it not one of Merton Park Edgar Wallace films, it’s not an Edgar Wallace film. It was made by Independent Artists from an original script by Malcolm Hulke and Eric Paice and was directed by Vernon Sewell. It was released in 1961.

Tony (Derren Nesbitt) and Frank (Keith Faulkner) are a couple of likely lads who’ve come up with a foolproof plan for robbing a bookie as he leaves the greyhound track. All they have to do is knock him on the head as he’s getting out of his car, grab his bag containing his takings and make their getaway in his car. Nothing could be simpler. Only one problem - to prevent just this sort of robbery the bookie has handcuffed himself to his bag. So the lads have to take the unconscious bookie with them. 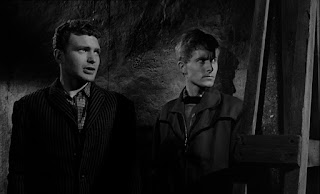 It’s no problem really. He must have the key on him. But he doesn’t.

And the bookie is not looking too good. Maybe Tony hit him a bit too hard. He’s alive but he’s in a bad way.

This movie is like a comedy of errors, except that it’s black comedy. It actually reminds me a little of Hitchcock’s The Trouble With Harry, except in this case it’s a live body rather than a dead one causing the trouble. It’s not just the difficulty of getting to the money in the bag. What do they do with the guy then? He obviously needs to be taken to a hospital or at least to a doctor but they can’t do that. They come up with a series of schemes to try to get some help for the stricken bookie, or to find a way to get him to a hospital without being seen, but something always goes wrong. 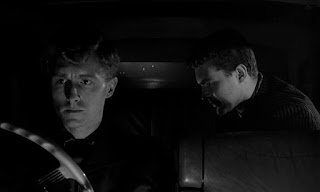 What’s interesting is that while there’s definitely a black comedy element there’s also a definite film noir element. Tony and Frank are stupid and incompetent thieves but they’re not really evil. Things just got out of hand. Now they’re descending into the noir nightmare world. If the man dies they’ll hang, they don’t want him to die, but they can’t seem to find a way out. They just keep descending further and further into the nightmare.

Derren Nesbitt is one of my favourite English actors of this period and this is just the sort of rôle at which he excels. Tony is over-confident and cocky but he’s not as smart as he thinks he is and he’s not as cool-headed as he thinks he is. His quick thinking, deciding that they’d take the bookie with them, has landed them in a nightmare. 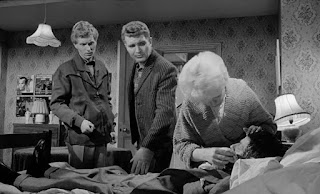 Frank is even less smart and cool-headed than his buddy plus he’s just had a fight with his wife who thinks (quite correctly as it turns out) that he’s spending too much time with that no-good layabout Tony. Frank would like to get out of the situation but he doesn’t want to betray Tony, but he doesn’t want to make his wife any more upset than she already is. Keith Faulkner’s performance balances nicely on the edge of hysteria.

They keep ending up back in the car with the bookie in the back seat. That’s where a large part of the action takes place, giving a nice sense of claustrophobia and desperation. It’s as if they’re condemned to drive around London forever with an unconscious possibly (for all they know) dying man as a back-seat passenger. It all happens at night, in true film noir style. 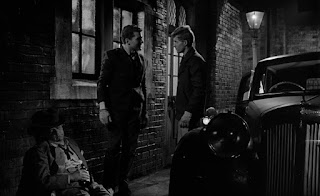 While the film noir influence is obvious (and both thematically and visually this movie is very film noir) and I’ve mentioned a certain Hitchcock movie already, there’s also a bit of the feel of an episode of Alfred Hitchcock Presents with a neat little sting in the tail. The ending is neat too - it’s not quite what you’re expecting in an early 60s British crime thriller. There’s also just a hint of horror. And most effectively there’s that feeling of futility. No matter what these guys do, they’re both literally and figuratively driving around in circles. There just seems to be no escape.

The Man in the Back Seat is a very pleasant little surprise, an offbeat and very effective little noir thriller. Very highly recommended.
Posted by dfordoom at 11:17 PM