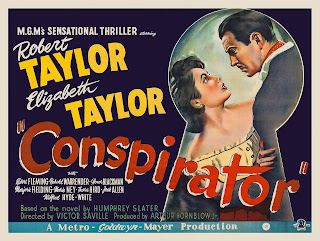 Conspirator, released by MGM in 1949, is a British-made combination romance/spy thriller. Teaming one of the major male heart-throbs of the era, Robert Taylor, with the stupendously beautiful 17-year-old Elizabeth Taylor must have seemed like a sure-fire recipe for success.

Melinda Grey (Elizabeth Taylor) is a young American girl in London in 1949. She meets a dashing British army officer, Major Michael Curragh, and is swept off her feet. They are soon married. The marriage is a happy one until Melinda discovers Michael’s dark secret. He is a Soviet spy. There are no spoilers involved here. All this information and more is revealed on the poster. The viewer knows the details of Michael’s secret almost from the start. The suspense comes from the fact that we know that sooner or later Melinda will find out, and the consequences are likely to be awkward for all concerned. To say the least. 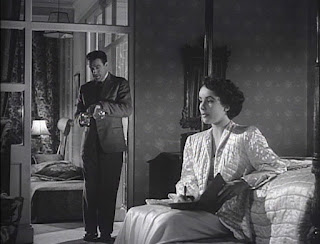 The question is what are Michael and Melinda going to do about the situation? There aren’t really any good options for either of them. Melinda thinks Michael will abandon his cause for love and Michael thinks Melinda will adopt his cause out of love.

This was about the time that Robert Taylor was just starting to break away from conventional matinee idol rôles and beginning to play more complex and much darker characters (he made the excellent The Bribe in 1949 also). He does reasonably well here. From the start Michael is a bit obsessive, the sort of man who might have a darker side. And he’s just a little secretive about his past, or at least reluctant to disclose details. We do learn that he is Irish, which is about as close as the film comes to giving him a motivation for being a spy. 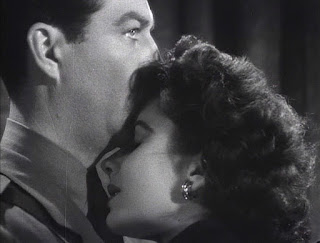 Elizabeth Taylor was perhaps a couple of years too young for the rôle of Melinda but in some ways that’s an advantage as it makes it more convincing that she should convince herself that she can persuade Michael to give up his beliefs for her.

It may seem a little odd that Robert Taylor, an American, gets cast as a British Army officer while Englishwoman Elizabeth Taylor gets cast as an American. Fortunately neither of them worries too much about accents (the modern obsession with accents was not yet in evidence in 1949). Robert Taylor was more than twice Elizabeth Taylor’s age at the time.  It has to be said that he does more with his rôle than she does with hers. 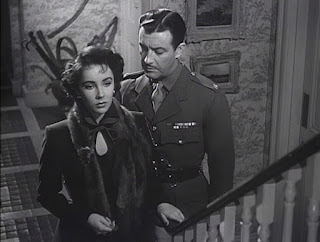 The Soviet spymasters are stereotypical evil communists (in contrast to Michael who is a romantic idealist).

This is an attempt at the kind of espionage suspense thriller laced with dangerous romance (and with just a hint of sadism) that Hitchcock had so much success with in the 40s and 50s.

Unfortunately Victor Saville, who directed Conspirator, is no Hitchcock. All the plot ingredients are there in Sally Benson’s script but the suspense never comes close to Hitchcockian levels, and Conspirator lacks the dazzling set-pieces that enliven even Hitchcock’s lesser films. 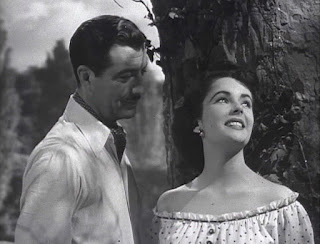 Freddie Young, one of the most successful of British cinematographers, ensures that the movie at least looks good (it was set in black-and-white as spy thrillers should be).

There are complicated themes of conflicting loyalties and cross-betrayals that are hinted at but perhaps needed to be developed a bit more.

The Warner Archive release offers a very good transfer without any extras.

So is this movie worth seeing? If you’re fan of Robert Taylor in his dark and brooding mode then the answer is probably yes. And if you’re a fan of Elizabeth Taylor it’s a chance to see her at the height of her youthful beauty in one of the early grown-up rôles. Since I’m a fan of both I enjoyed the film even if it didn’t reach any great heights. So I’ll give it a qualified recommendation.
Posted by dfordoom at 10:41 PM