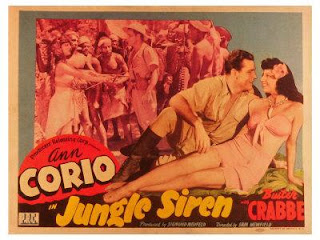 Jungle Siren stars Buster Crabbe and strip-tease legend Ann Corio and I’ll have more to say about them later.

Two Americans are helping the Free French to build an airfield in Africa. Captain Gary Hart (Buster Crabbe) and Sergeant Mike Jenkins (Paul Bryar) soon discover that there are people who don’t want that airfield built. The chief of one of the local tribes, Chief Selangi, is one of those people but the chief is actually in the pay of sinister Nazi agent George Lukas. 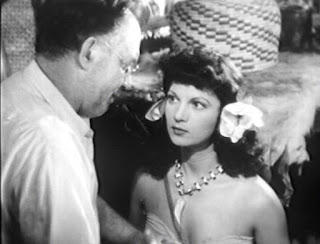 The two Americans do have an ally but she’s quite a handful. She is Kuhlaya (Ann Corio) and she is a wild jungle girl. She is however not quite a female Tarzan. We find out very early on that she can read and write. Her parents were missionaries. They were killed, and she has reason to believe that it was Chief Selangi who killed them. She has been raised partly by the alcoholic Dr Thomas Harrigan and partly by a local tribe.

Kuhlaya is beautiful and she’s basically a nice girl, apart from her habit of killing people she doesn’t approve of. She’s not civilised but not entirely uncivilised. She’s your classic jungle girl, caught between two cultures, but she’s as deadly as she is beautiful.
And she is a bit of an unguided missile. She’s also heavily into the concept of revenge. 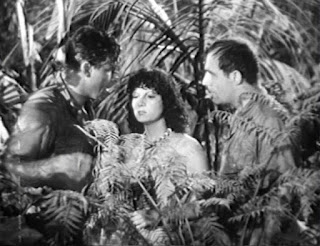 She’s not the only beautiful dangerous female the two American boys have to deal with. There’s also Lukas’s wife Anna (Evelyn Wahl). Anna may or may not be a loyal Nazi but she’s definitely man-crazy. She takes one look at Captain Hart and she wants him. She wants him real bad.

Of course you know that there are going to be multiple attempts to kill Captain Hart and Sergeant Jenkins. And of course you know that either Captain Hart will fall for Kuhlaya or she will fall for him. In this case it’s Kuhlaya who falls first. For her it’s lust at first sight (she thinks he’s an absolute hunk) but lust can turn pretty easily into love. And Captain Hart is not exactly immune to her savage charms. She’s like a wild animal but she’s also all woman. 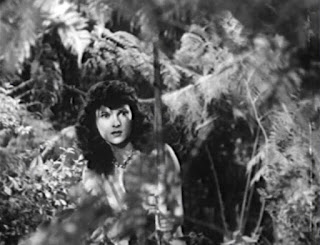 Director Sam Newfield (Sigmund Neufeld’s brother) was a B-movie specialist who could be relied upon to handle zero budgets and absurdly short shooting schedules. Get it right the first time because there ain’t gonna be any retakes. His movies were rarely masterpieces but some were remarkably entertaining. He understood pacing. You can get away with low budgets and laughable production values if you make sure that there’s always something happening.

Buster Crabbe was extremely good at playing likeable heroes and with his background in serials he would have had no problem working on tight schedules. He wasn’t the world’s greatest actor but he had personality and he had charisma. He also had the kind of looks that women went for in a big way. This movie has Ann Corio to provide eye candy for male audience members and Buster Crabbe provides the eye candy for the ladies (who were undoubtedly pleased whenever he took off his shirt). 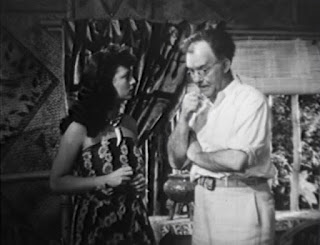 And then there’s Ann Corio. Miss Corio wasn’t just a stripper, she was one of the most famous strippers of the era, and one of the most luscious. She made a handful of very low-budget movies in the 40s. As an actress she’s actually reasonable competent (more than adequate for a movie such as this) but it isn’t great acting that is required of her here. What she needs is presence (and as a burlesque queen she had that). She needs to be sexy (no problem at all). And she needs to convince us that Kuhlaya is good-hearted but also wild and dangerous and passionate and jealous. She does that pretty well. Overall her performance works just fine.

If you want to see Jungle Siren you only choices are going to be public domain releases. I saw the Sinister Cinema version. Sound quality is dodgy (plenty of hiss) but the dialogue is always early understandable. Image quality is actually very good. On the whole it’s a perfect acceptable release.

Jungle Siren is a typical low-budget jungle adventure but Buster Crabbe and Ann Corio are enough to make it worth seeing. I’m recommending this one.
Posted by dfordoom at 6:02 PM