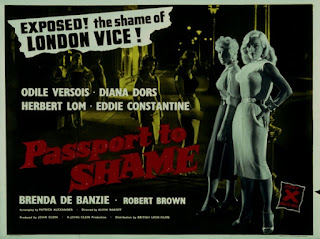 Room 43 (AKA Passport to Shame) is a nicely sleazy 1958 British crime thriller about white slavery, with Diana Dors starring.

It starts off with a great line of dialogue. Miss Dors steps off the pavement and loses her footing and a passer-by tells her that she almost ended up in the gutter. She gives him this wonderful look, as if she knows all about ending up in the gutter. If you’re going to make a sleazy film you might as well establish the proper mood right at the start.

Nick Biaggi has a number of business interests, none of them honest. He runs a finance company that specialises in offering loans, without any security, to pretty young women. It’s a means of recruiting girls into his real business, white slavery. He recruits a lot of his girls from abroad. To get them passports he has to find husbands for them. Temporary husbands of course. 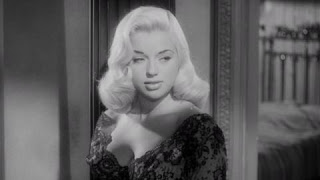 He has found a suitable husband his latest girl (an innocent French girl named Malou). Johnny McVey is a Canadian cab driver who has just borrowed a lot of money (from Nick’s finance company although Johnny doesn’t know this) to buy a new cab and now the cab has been smashed up (which Nick also arranged). Nick comes to Johnny’s rescue, getting him off the hook for the loan. Nick suggests that Johnny could also make an easy two hundred quid by marrying a pretty French girl who really needs a passport. The marriage can be annulled afterwards. There won’t be any bother and Johnny would really be helping the girl out. Johnny is a nice guy, exactly the kind of guy who would love to do something nice for a pretty girl.

Now Johnny isn’t stupid. He figures out pretty quickly what the racket is. Nick is bringing in prostitutes (or girls destined to be prostitutes) but he needs British passports for them so they can’t be deported once they start working the streets. Johnny thinks he doesn’t care because he thinks he’s cynical and hardboiled. When he meets his bride-to-be he naturally assumes she’s a tart. He’s amused when she tells him she’s a decent respectable girl. 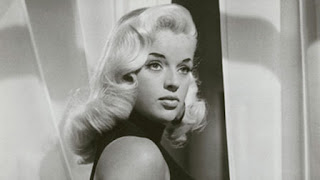 Malou thinks she’s been hired as a companion to a nice English lady. It seems like a great job. She’s been set up in a nice house and she’s been given pretty dresses to wear. And there’s another girl living in the house, Vicki. Malou thinks Vicki is a nice girl and has no idea how Vicki earns the money that pays for the beautiful clothes she wears. Malou is very very innocent and she still has no idea what’s in store for her. She starts to get an inkling when she gets a glimpse inside Room 43, and sees what Vicki wears underneath her lovely dresses. Nice girls don’t wear underwear like that. Only women of a certain type wear such things. Then Nick explains things to Malou.

Johnny has been thinking things through as well. And he doesn’t like the conclusions that he draws. He is after all, technically, married to Malou and he’s not keen on the idea of his sweet little French wife as a streetwalker. But is it too late for Malou, and for Johnny?

This movie boasts an awesome cast. Firstly there’s Diana Dors as Vicki, at the absolute height of her sex goddess phase and looking breathtakingly beautiful. Vicki is a Whore With a Heart of Gold. Well, sort of. She’s cynically realistic but it’s a life that ruined her sister so she’s not exactly happy being a whore. Like Johnny, she’s not as hardboiled as she thinks she is. Odile Versois as Malou is technically the female lead in the picture but Diana Dors was a much bigger name and a much bigger box-office draw, and while Mlle Versois is good it has to be said that Diana Dors effortlessly dominates the movie even in what is technically a supporting rôle (albeit a very meaty and substantial supporting rôle). Dors as always lights up the screen, and in practical terms she is indeed the star. 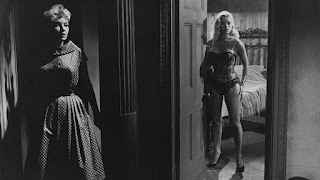 Then there’s Herbert Lom, deliciously oily as Nick. It’s the sort of rôle he always had fun with and he has even more fun with Nick’s pretensions to being an English gentleman.

And finally there’s Eddie Constantine, best remembered from the wonderful French Lemmy Caution thrillers such as Dames Don’t Care. He’s a perfect slightly reluctant hero, a guy who doesn’t really want to do the right thing or get mixed up in other people’s problems but he just can’t bring himself to behave like a louse. It’s a fine performance with plenty of rough-around-the-edges charm.

Look out for Joan Sims (of Carry On fame) in a small part.

For those who like spotting classic cars in movies Nick drives a very cool Aston Martin DB Mark III (which is incidentally the car James Bond drives in the original 1959 novel version of Goldfinger).

There’s some nice hardboiled dialogue. Vicki tells Malou she’s in the entertainment business. Malou, all excited, asks her what she does. Vicki replies, “Entertain.” 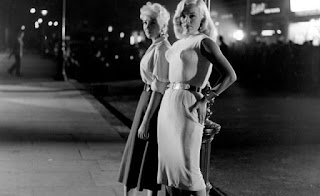 There’s an amusing drug/dream sequence, a fascinating piece of psychedelia before anyone knew what psychedelia was.

This is a hard-to-find movie. The only copy I could get hold of is a slightly dubious grey market version which offers a fairly poor transfer which appears too be pan-and-scan. But it’s a Diana Dors movie so I had to have it. And if you’re a Diana Dors fan you’ll want it as well.

Room 43 is an overheated sex and sin melodrama but it has style, it has fine performances and it works for what it is. It’s sleazy and it’s romantic and it’s thoroughly enjoyable in a slightly disreputable way, and it has an exciting finale as well. Highly recommended.
Posted by dfordoom at 10:10 PM