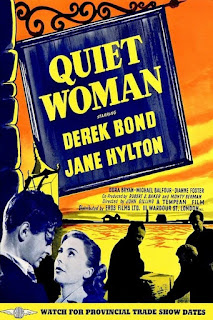 The Quiet Woman is an early crime film from Tempean Films, written and directed by John Gilling, for whom I have a great admiration. The Quiet Woman has perhaps just a slight film noir tinge as I’ll explain later.

Jane Foster (Jane Hylton) has just taken over as proprietress of The Quiet Woman, a pub in a seaside town. She’s disturbed to discover that local painter and smuggler Duncan McLeod (Derek Bond) and his pal Lefty (Michael Balfour) have been accustomed to using her pub to store contraband liquor. She puts a stop to that immediately.

Duncan takes this setback with good humour. He’s already taken a bit of a shine to Jane. She strongly disapproves of him but he’s a charming rogue and she’s a woman and she’s clearly, if reluctantly, attracted to him.

It’s obvious that Jane has some secret and that she’s terrified that she will be recognised and her secret discovered.

Duncan is busy with his painting and he has a model set down from London to pose for him. He gets an unpleasant shock when the model turns out to be Helen (Dianne Foster). In the past Helen was not only his model but his girlfriend. They broke up but Helen has never accepted this. She still loves Duncan and still means to have him. 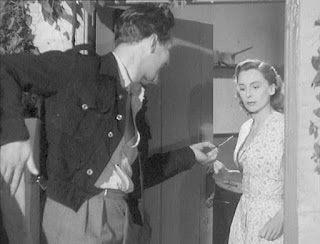 Duncan then does just about the dumbest thing any man could do. He decides to do a painting of Helen as a mermaid, not a nude but a kind of semi-nude, but unbeknownst to Helen (he won’t let her see the painting until it’s finished) he’s given the mermaid in the painting Jane’s face. You can just imagine how any woman would react to having her picture painted but having the picture given the face of her hated rival.

That secret of Jane’s past comes back to haunt her. Worst of all, Helen finds out the secret. And decides to make use of it.

Both Jane and Duncan are in danger of being drawn into an illegal act. They don’t want to do it but they don’t see any other way out. 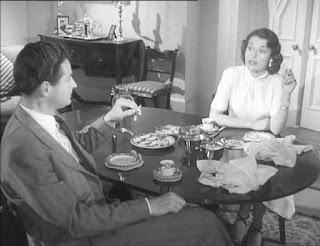 This is a very low-key crime film. It’s not the crimes that matter but the responses of the various characters to the situation as it unfolds, and what those responses reveal about those characters. There’s a touch of film noir to Jane’s situation. You can, although it’s maybe a bit of a stretch, see her as the noir protagonist. She’s not a criminal but her past is not entirely blameless and she has succumbed to certain weaknesses in the past and she will be tempted to succumb again, by a man who could be seen as a homme fatale. Jane Hylton is quietly effective in the role.

There’s maybe even similar tinge to Duncan’s story. He is a criminal, but a petty criminal who has found ways to justify his actions to himself. Now he may be drawn deeper into the world of crime. Derek Bond was a good reliable actor and playing a charming rogue was right up his alley. 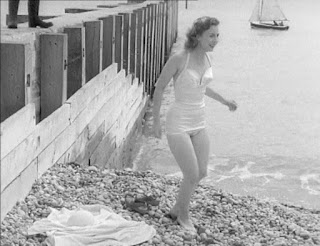 Helen looks like she might have femme fatale potential. She’s ruthless and scheming, she’s beautiful, we can assume that she has used her physical charms to considerable advantage and she’s passionate and insanely jealous.

The peaceful coastal setting is put to good use, lulling us into thinking that nothing bad can happen here.

The sea plays a major role. Duncan’s love of the sea may be his undoing. 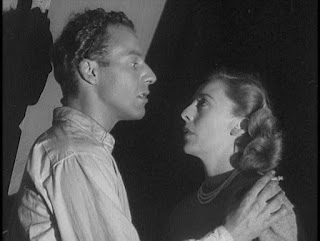 This movie is included in Renown Pictures’ ten-movie Crime Collection Volume 2 boxed set. The transfer is clearly unrestored but acceptable. There are no extras, but you do get ten movies in the set.

The Quiet Woman is an unassuming very low-key crime B-picture that isn’t going to knock your socks off but it’s a decent reasonably involving story and it’s a movie that has just a bit more to it than most such B-movies. Anything that John Gilling was involved with is usually worth a look and this is no exception. Recommended.
Posted by dfordoom at 4:12 AM