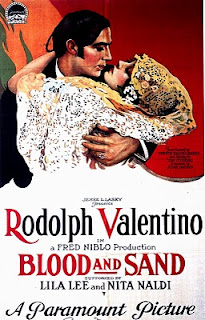 Blood and Sand was based on a book by the Spanish writer Vicente Blasco Ibáñez, whose novels provided the basis for surprisingly large number of Hollywood silent movies (the Greta Garbo vehicles Torrent and The Temptress and another Valentino movie, The Four Horsemen of the Apocalypse). The novel was apparently an impassioned attack on bull-fighting. This was watered down somewhat in the 1922 movie, although it’s still there in the background.

Rudolph Valentino plays Juan, a young man from a poor family who achieves spectacular success as a matador, but his success does not prove to be the uncomplicated blessing he expected. He loves his wife Carmen, but as a successful matador he meets a lot of charming women, and unfortunately he is quite unable to resist the charms of one in particular, the beautiful but wicked Doña Sol.

The plot contrasts his career with another career, that of the notorious bandit Plumitas

, who becomes Juan’s friend. Plumitas points out that they’re both killers, but Juan gets fame and money from killing while he is an outlaw who expects to end his life being “shot down like a dog.” We also get strange little linking pieces, in which an elderly philosopher philosophises about violence and cruelty.

Fred Niblo’s direction is unexciting, but this turns out to be an unexpected asset – it puts the focus on character rather than spectacle. This places great demand on the actors, especially Valentino. Valentino is more than equal to the task, giving a portrayal that is subtle and complex of a man who is neither hero nor villain but 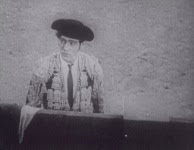 contains the seeds of both qualities. Nita Naldi makes a wonderful wicked woman as Doña Sol. Lila Lee has the relatively thankless role of Juan’s virtuous wife, but she does a competent job.

While the direction is static there are some images that have a certain sombre tragic quality to them. The bull-fighting scenes are (mercifully) very brief, and consist mostly of stock footage intercut with a few close shots of Valentino. The editing of the bull-fight sequences was done by Dorothy Arzner, who went on to become one of Hollywood’s very very rare women directors. If you’re a Valentino fan you’ve already seen this one. If you’re not a Valentino fan this movie could well be the one to convert you.
Posted by dfordoom at 1:45 PM