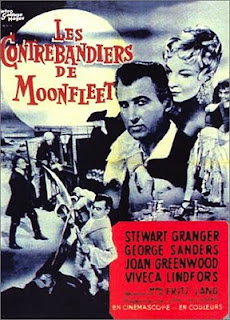 A Fritz Lang movie in colour, and in Cinemascope? And it’s an adventure movie for children? That couldn’t possibly have worked, could it? But somehow Moonfleet does work. Yes, it really is a kids’ adventure movie, and on that level it works very well. But it’s also an adventure movie by a master film-maker, and it is still very much a Fritz Lang movie, with plenty of characteristic touches. It also gave Lang the opportunity to go for a more overtly Expressionist and gothic look than was the case in most of his Hollywood movies, and it’s a bit reminiscent of his early silent masterpieces in that respect.

It’s 1757, and a wicked squire (Jeremy Fox, played by Stewart Granger) is masterminding a smuggling operation somewhere in southern England. If you think that sounds a bit like Hitchcock’s Jamaica Inn, you’re dead wrong – the feel of the two movies couldn’t be more different. There’s nothing remotely camp about Moonfleet. Lang play

s it straight, and he gets away with it.

One day a small boy turns up bearing a message for Fox, a message from his past, a message that requires him to take responsibility for the boy. All very inconvenient for someone who divides his life between criminal activities and a life of sensual indulgence. There’s a local legend about the boy’s family, with an evil long-dead ancestor (known as Redbeard) reputed to still roam the village churchyard at nigh

t, and the legend also speaks of a fabulous diamond. Many have sought the diamond, but in vain. Numerous complications naturally ensue.

Jeremy Fox is a nicely ambiguous character who wouldn’t be out of place in a Lang film noir. Stewart Granger is well cast and does a solid job. George Sanders is suitably corrupt and creepy as a dissipated and vicious nobleman involved in various schemes with Fox. Joan Greenwood is delicious as his beautiful but even more depraved wife. Jon Whiteley as the boy manages not to be annoying, a rare feat for a Hollywood child actor in this era (or any era for that

matter). The movie has a very gothic look indeed, with manages to look wonderfully gloomy and foreboding despite the use of colour. Colour is in fact used with great skill in this movie.

The basic story may be an adventure yarn for kids but there’s more than enough in Moonfleet to provide intelligent and entertaining viewing for audiences of any age. I believe it’s only available on DVD in France (where it’s very highly regarded) but apparently it turns up on TCM from time to time. Highly recommended.
Posted by dfordoom at 12:49 AM