I’ve seen The Green Cockatoo referred to in several sources as the first British film noir. I was a little sceptical about this, but in fact it does have some fairly impressive noir credentials.

Made in 1937 and based on a Graham Greene story, it was directed by William Cameron Menzies. Menzies is better known as an art director and production designer (and a very good one) but he did direct a number of movies, and he does a fine job with this one. Mutz Greenbaum provides some very noir cinematography, in fact remarkably noir for a 1930s British film. It also features some seriously Expressionist sets. 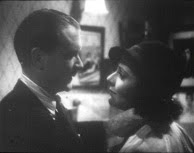 John Mills is better than you might expect as Jim. He’s reasonably convincing as a hardboiled character. Jim is actually a complex and somewhat tortured character, as you’d expect in a Graham Greene story.

Robert Newton plays his brother Dave, who has got in way over his head with the 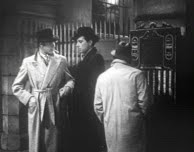 gang controlled by Terrell (Charles Oliver) and is now on the run after having double-crossed the gang. He encounters Eileen (René Ray), an innocent young country lass who has just arrived in London. Eileen is bewildered enough already, but she soon finds herself involved in a nightmare, suspected of murder and with gangsters pursuing her.

It’ an entertaining and surprisingly stylish little movie. Unfortunately it’s not in terribly good condition. In many places you can see that the nitrate has started to decompose. It’s a shame, because it’s a movie that deserves a decent restoration and a good DVD release. It’s still very much worth seeing, and really it’s a must for noir fans.
Posted by dfordoom at 4:26 PM