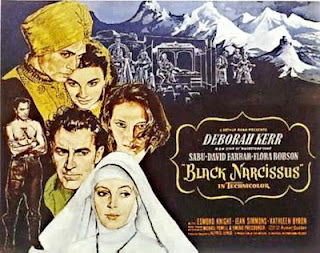 Michael Powell and Emeric Pressburger’s Black Narcissus is a movie that overwhelms the viewer with its visual magnificence. It’s a staggeringly beautiful film, and one can only gaze in awe at the lusciousness of the colours. Cinematography Jack Cardiff was nothing short of a genius and this is arguably his masterwork (for which he picked up an Oscar).

The plot is close to non-existent, but such as it is it involves a group of Anglican (not Roman Catholic) trying to establish a convent including a school and a hospital in the Himalayas in British India. The convent is set up in a palace formerly reserved for the women of the local rajah and is decorated with some rather stunnin

The visuals overshadow the story, but they’re meant to. What this film has to say it says by way of a succession of images. Plot, dialogue and acting are more or less irrelevant. Colours are more important than acting. For a 1947 British movie this approach is extraordinarily bold and unconventional. And not one scene of Black Narcissus was filmed in India. The Himalayan scenes were all done in the stu

dio. It’s a completely artificial world, but then of course so is a nunnery.

This movie is absolutely dripping with sexual and emotional repression. The unhealthiness of the atmosphere is overpowering. This is an attack on the celibate religious life that is in its own way every bit as savage as Ken Russell’s notorious 1971 film The Devils, and it’s truly amazing that they got away with it in 1947. Particularly telling is the scene in which one of the nuns, who has renounced her vows, sits opposite the head of the order whilst applying astonishingly lurid red lipstick.

The madness of the nuns is portrayed mostly by visual means, by colour and by composition, rather than by the acting, despite Kathleen Byron’s scenery-chewing but nonetheless effective performance. Deborah Kerr as the Sister Superior is good, but it’s mostly the way she’s photographed that conveys the nightmare of a control freak slowly losing control.

This is a very un-British movie, and it demonstrates that Michael Powell was a disturbing influence in British cinema long before making his infamous Peeping Tom in 1960. Black Narcissus is a strange and brilliant movie.
Posted by dfordoom at 11:12 PM