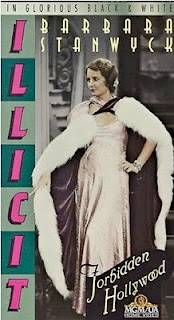 Illicit, in 1931, gave Barbara Stanwyck her first starring role. She plays a young woman, Anne Vincent, who doesn’t want to marry her boyfriend. She wants to keep living in sin, because that’s what they’ve been doing and she’s been thoroughly enjoying it, and because she believes marriage kills romance, and also because she doesn’t want to become a man’s property.

As events unfold, and she finds herself pressured into marriage, it becomes obvious that most of her fears were justified. This is very much the kind of movie that the tightening up of the Hollywood Production Code in 1934 was intended to stop, with its guilt-free attitude towards sex and its very independent heroine.

Stanwyck is delightful – funny and feisty and sweet and likeable an sexy at the same time. James Rennie is OK as her boyfriend, who turns out to be rather conventional. Ricardo Cortez is su

ave and slightly sinister as one of Anne’s ex-boyfriends who is still intermittently pursuing her.

Joan Blondell, as so often, plays the heroine’s best friends and, as always, she lights up the screen. Charles Butterworth plays an amusing perpetually drunken friend, the kind of role that is often annoying in these early sound pictures but Butterworth is quite wonderful, with a superb very dry wit and an air of dazed benevolence. 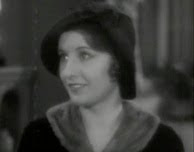 Illicit is always entertaining and provides a nice mix of humour and romance. It’s also nice to see a movie which doesn’t make judgments on any of its characters. Even the “other woman” isn’t demonised. Recommended. And if you’re a fan of Barbara Stanwyck (and what right-thinking person isn’t) I recommend it even more highly.

It was released on VHS in the celebrated Forbidden Hollywood series but sadly does not appear to have ever received a DVD release.
Posted by dfordoom at 10:03 PM