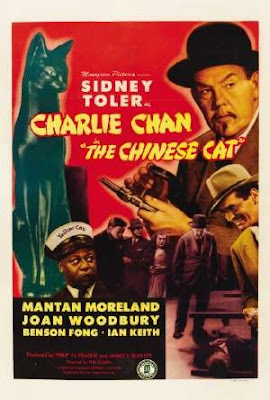 Charlie Chan in The Chinese Cat was the second of Monogram’s Charlie Chan films (the earlier ones having been made by 20th Century-Fox) and it’s not a particularly memorable effort.

This will be a two-part review of sorts since straight after this I’m going to watch one of the earlier Fox movies with Warner Oland playing the famous Chinese-Hawaiian detective.

Sidney Toler had taken over the role after Oland’s death and in my view he’s a much less satisfactory Charlie Chan. By 1944 he was really too old for the role (the Chan of the books is in his 40s and Toler was 70) and he doesn’t look even remotely Asian.

n further away from the detective of Earl Derr Biggers’ books. The Chan of the books would never have treated his children with such contempt. Tommy Chan is there purely for laughs which means we have two actors rather than one providing the totally unnecessary and extremely annoying comic relief, the other being African-American comic Mantan Moreland as taxi-driver Birmingham Brown. The comic relief really swamps the mystery in this particular production.

The story starts with a locked-room mystery - a wealthy society woman’s husband is murdered and she finds herself the chief suspect. The murder is linked to a major jewellery robbery.

As you’d expect it suffers from much lower production values than the Fox efforts but Phil Rosen’s lively direction makes up for many of these deficiencies. The result is a mildly entertaining B-movie comedy mystery.

I don’t think Sidney Toler’s performance is all that bad but I just didn’t think the character of Charlie Chan came through in this film. The script gave him no help.

MGM have released this one on DVD. The transfer is not fantastic and there are no extras so it’s hard to recommend this one.
Posted by dfordoom at 11:12 PM