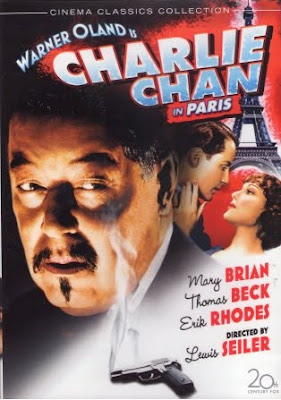 There have been more than fifty Charlie Chan movies. Charlie Chan in Paris was one of the sixteen made by Fox in the 1930s with Warner Oland playing the great Chinese detective from Hawaii. It’s the second of the Warner Oland films that I’ve seen and confirms my impression that Oland was simply perfect for the role.

Like most of the Charlie Chan movies this one is not based on one of Earl Derr Biggers’ novels (of which he wrote a mere half-dozen). But it does capture the feel of the books pretty well.

Chan is investigating some shady goings-on in a Paris bank. Pretty soon the first murder connected with the case occurs. A female night-club singer is the victim. The crime might not seem directly linked to the bank’s problem but Chan has reason to believe the link is there. A cantakerous war veteran on crutches always seem to be on the scene when something happens and it will take all the famous detective’s skill to sort this one out.

uced the character of Number One son Lee Chan (played by Keye Luke), a character destined to become a fixture. This version of Charlie Chan (unlike the one played by Sidney Toler in the 1944 Charlie Chan in The Chinese Cat) does not put down his son. In fact he’s brimming with familial pride. While his sons don’t appear in the novels this does bring the character much closer to Earl Derr Biggers’ original conception. Charlie Chan is a man for whom family is everything.

h a detective who relies on intellect rather than muscle. He is not a two-fisted action hero. For the purposes of a movie series it can be useful to have some action however. Introducing Lee Chan to the series therefore works out rather well. He can handle the more physical aspects of crime-solving. In this film at least he is certainly not a mere comic relief character.

As in the books racial stereotypes are introduced, but only in order for them to be deftly and wittily mocked.

The likeability of Warn

er Oland’s performance is the movie’s biggest asset. Oland was bon in Sweden but always claimed to have some Asian blood. More important than that was the fact that he took the role very seriously and immersed himself in it. He became interested in Chinese culture and he was clearly very fond of the character he played. His enthusiasm for the role is always evident.

Apart from that it’s an example of the better kind of 1930s crime B-movie, very well-made and highly entertaining.

Fox’s DVD release includes an informative documentary and with both picture and sound quality being pretty good this one can definitely be recommended.
Posted by dfordoom at 7:04 PM