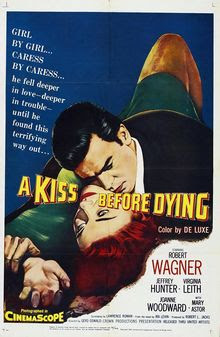 A Kiss Before Dying is yet another example of the dangers of taking seriously lists of supposed film noirs. This one is more of an attempt at a Hitchcockian thriller, and it’s a mixed bag.

Based on Ira Levin’s novel it boasts a plot that includes everything required to make a top-notch psychological suspense thriller. Bud Corliss (Robert Wagner) is regarded as a bit of a boy genius at his university. At least he and his mother think he’s a boy genius. He certainly has the requisite ambition. His girlfriend Dorothy Kingship (Joanne Woodward) is the daughter of mining magnate Leo Kingship (George Macready) and Bud has a carefully worked-out plan to become the next chief of the Kingship mining empire. It’s going to take some fancy footwork though - the elder Kingship is a suspicious control freak - but Bud is very good at fancy footwork.

Bud’s plans are threatened with disaster when Dorothy falls pregnant. Old man Kingship is not going to be pleased with that little development and Bud has had no time to ingratiate himself with the tycoon. Now they’re going to have to get marred immediately and if, as expected, Dorothy’s father cuts her off without a penny he’ll be force 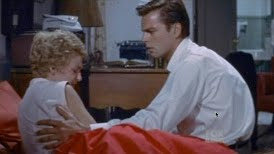 d to get a real job, something unworthy of a boy genius. The marriage no longer fits in with Bud’s strategy for success. If only there was a way of avoiding it. If only an accident could occur to remove this inconvenient obstacle (Dorothy) from his life. If you want an accident there’s no point just sitting around waiting for one. You have to make it happen. This is the sort of thing Bud is good at and fortunately he’s not troubled by inconveniences like a conscience.

Soon Bud is back on course. Dorothy had a sister, Ellen (Virginia Leith), and one sister is as good as another.

The movie follows the standard Hitchcock formula for suspense, with the audience knowing more or less everything and the sus 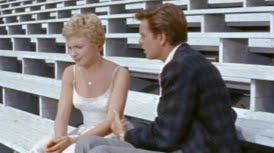 pense coming from the fact that the characters lack this vital information.

Director Gerd Oswald figures if you’re going to attempt a Hitchcock-style thriller you’re going to need some impressive visual set-pieces, and he provides them. The rooftop scene between Bud and Dorothy is superb. Oswald worked almost entirely in B-movies and television but he displays a sure touch here that suggests he was worthy of bigger things.

What lets the film down is the acting, particularly from the supporting players. Virginia Leith is too distant. Jeffrey Hunter as the bookish amateur detective fails to come to terms with his character at all. Mary Astor is OK as Bud’s mother, but Joanne Woodward is truly atrocious, and incredibly annoying with it. She went on to 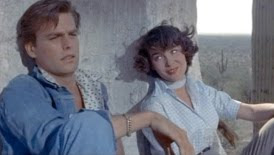 become a fine actress but there is no sign here of the talent she displayed in later films. The problem is that these supporting characters are important. We need to care about them and believe in them and it doesn’t happen.

George Macready does slightly better, adding at least some subtlety to his Father From Hell performance.

The movie sounds like it’s heading for disaster but luckily Robert Wagner is on hand to save the day. Wagner is generally regarded as a bit of a lightweight but he’s genuinely chilling here, and he provides the fascination that the other actors are unable to give us. Making what is basically a pure psychopath interesting isn’t easy but he manages it with aplomb. He has to carry the movie more or less single-handedly and he pulls it off.

A flawed film, but worth catching for some stylish visuals and for Wagner’s career-best acting performance.
Posted by dfordoom at 7:03 PM