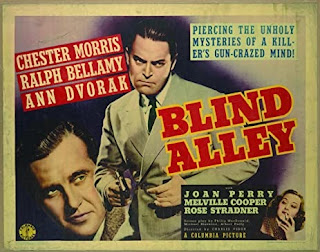 Blind Alley is an interesting 1939 Columbia crime movie directed by Charles Vidor that can be considered as being in some degree a forerunner of film noir, a proto-noir if you will.

The plot was obviously influenced to some extent by Warner Brothers’ 1936 hit The Petrified Forest, but Blind Alley adds some touches of its own.

Hal Wilson (Chester Morris) is a bank robber and a killer and he’s escaped from the penitentiary and is on the run, in the company of his girlfriend Mary (Ann Dvorak) and a couple of members of his gang. He’s arranged for one of his pals to obtain a boat to get him across the lake (I don’t recall that we’re ever told which lake it is). While they’re waiting for the boat to arrive they decide to hole up in a lakeside house. The house is owned by psychiatrist Dr Anthony Shelby (Ralph Bellamy). In the house are Dr Shelby, his wife and his young son, three assorted house guests and a couple of servants, and they all find themselves held hostage by Wilson and his gang. 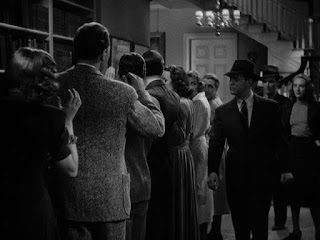 Wilson is both violent and very edgy. After witnessing Wilson committing an act of ruthless and callous violence Dr Shelby decides he’s going to destroy Wilson’s mind. He’s going to do this by taking Wilson’s mind to pieces by means of psychoanalysis. What follows is a battle of minds between Wilson and Dr Shelby.

While this is happening the boat is not arriving. Several hours later it has still not turned up and Wilson and his crew are getting more and more worried, and more and more jumpy. If Dr Shelby doesn’t succeed in breaking Wilson’s mind it’s possible that one of Wilson’s pals will do something stupid. It’s a tense situation and it gets steadily tenser. 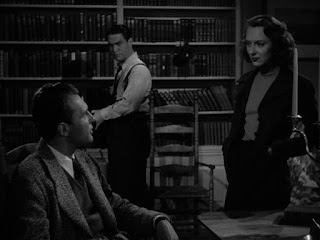 The mental struggle for dominance between Hal Wilson and Dr Shelby is handled quite skillfully, and there’s plenty of Freudian silliness to keep fans of psychiatric noir happy. There are even a couple of dream sequences, making this movie in some senses a dress rehearsal for Hitchcock’s Spellbound. The dream sequences are not as elaborate or as inventive as the ones in Hitchcock’s film but they’re still quite entertaining.

There’s not really very much noir in this movie, although the gradual disintegration of Hal Wilson’s mind does give it a definite dark edge.

Both the resolution of the plot, and the outcome of the mind battle between the killer and the psychiatrist, are delightfully loopy and far-fetched. 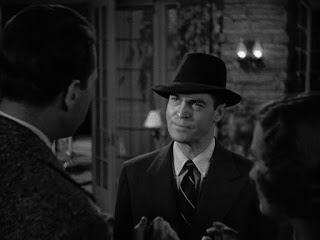 Chester Morris does his best tough guy act as the killer on the run. He portrays the slow crumbling of the hoodlum’s mind quite efficiently without going too far over the top. Ralph Bellamy is perhaps too calm and collected as Dr Shelby. It’s hard to believe that anyone could be quite so cool in such a situation. Bellamy plays Shelby as a standard movie professorial type, complete with pipe. Bellamy does manage to make some ridiculous dialogue sound fairly convincing and overall his performance is effective enough. Ann Dvorak does a fine job as the killer’s loyal girlfriend. As Wilson starts to fall apart she starts edging towards hysteria, adding more tension to the mix. Especially as she has a gun and seems like she might be the trigger-happy type. The supporting players acquit themselves reasonably well.

Charles Vidor directs the movie in a thoroughly competent fashion. The movie lacks the distinctive noir style but it’s technically polished by B-movie standards. Mercifully there’s no attempt to inject any comic relief. 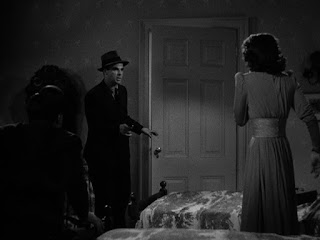 Sony have done a reasonable job with their release of this movie. Picture and sound quality are both very acceptable. There are no extras.

Blind Alley is enjoyable psychobabble hokum combined with a tense crime story. A good solid crime B-movie and even if its claim to being a proto-noir are dubious fans of film noir and classic Hollywood B-movies should find this to be rewarding viewing. Recommended.
Posted by dfordoom at 10:17 PM