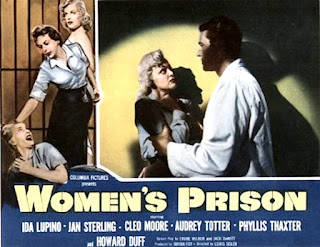 Women’s Prison is, as its title suggests, a movie about women in prisons. This 1955 Columbia production may well be the worst movie of its type ever made.

Helene Jensen (Phyllis Thaxter) has just arrived at the women’s penitentiary. She’s a meek housewife who was convicted of manslaughter after she killed a child in a traffic accident. She is befriended by Brenda (Jan Sterling), an old hand who is just about to start yet another prison sentence.

Helene can’t cope with life in prison. She goes from one hysterical episode to another. The prison doctor, Dr Crane (Howard Duff) feels sorry for her, but then he feels sorry for all the prisoners. He’s one of those people who spends his whole life feeling sorry for people but he reserves most of his pity for people who don’t deserve it. 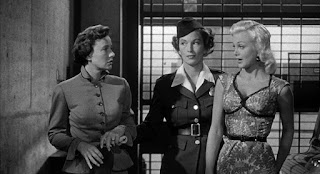 Meanwhile Helene is still getting hysterical and spends most of her time in the infirmary.

The women’s prison is run by Amelia van Zandt (Ida Lupino). She’s the stereotypical wicked sadistic prison warden. She and Dr Crane have had many confrontations about the treatment of prisoners. Things come to a head when it is discovered than Glen Burton’s wife Jane is pregnant. This is embarrassing for the prison authorities since she has been behind bars for the last two years. Warden Brock (from the men’s prison) and Amelia van Zandt have to discover how Glen Burton got into the women’s section. In trying to get the information from Jane Burton van Zandt gets a bit carried away and after being slapped a couple of times Jane promptly collapses. 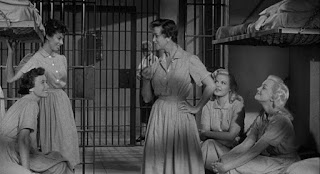 When the women prisoners find out about Jane Burton they start a riot, which threatens to get out of control and leave the prisoners in charge of the prison.

There’s not a single character in this movie who feels real. They are all stereotypes. The prisoners are all good while the authorities running the prison are all bad. Ida Lupino does the best she can but her character is such a two-dimensional villain and the entire movie is so phony there’s little she can do. It’s a complete waste of a fine actress.

Howard Duff has an even more thankless role as Dr Crane. Dr Crane is a smarmy, smug, self-satisfied bleeding heart and that’s how Duff plays him. He’s irritating beyond belief. 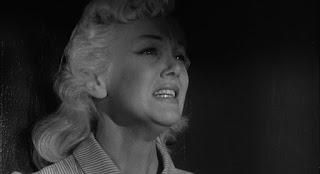 Cleo Moore and Jan Sterling play sympathetic prisoners but again they’re mere stereotypes. They’re the victims of a wicked oppressive system. Phyllis Thaxter is excruciating as Helene Jensen. If only Helene could stop feeling sorry for herself and give some thought to the parents of the child she killed we might be able to respect her but the script never even suggests such a thought. We’re simply supposed to pity her as another victim of an oppressive system.

The entire movie is one long bleeding heart sob story about the inhumanity of the system, and of course no mention is made of the price that victims of crime have to pay. The movie makes it plain that we’re supposed to be on the side of the prisoners but conveniently it forgets to mention the trail of misery that criminals leave behind them. 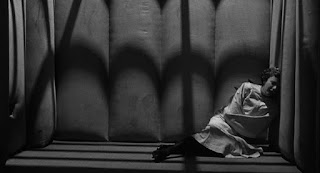 Lewis Seiler directed this mess and shows no signs of inspiration or imagination. There’s nothing even vaguely noirish about the visual style of the film.

This movie is included in Sony’s Bad Girls of Noir volume 2 DVD set. It’s an acceptable print although it is rather grainy. There are no extras.

By no stretch of the imagination can Women’s Prison be considered a film noir. It is a social problem message movie, and it’s one of the most annoying and heavy-handed examples of that genre ever made. This is simplistic rubbish that tries to manipulate the viewer into an emotional response. This is a movie to be avoided at all costs.
Posted by dfordoom at 5:47 PM