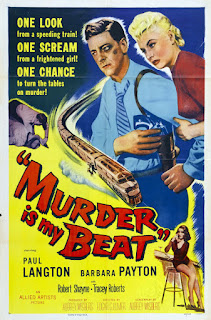 Murder Is My Beat is a 1955 Edgar G. Ulmer film noir but sadly it cannot be described as one of the highlights of his career.

The movie was released by Allied Artists, formerly Monogram Pictures. Allied Artists aimed to make marginally more prestigious pictures than the average Monogram picture, but Murder Is My Beat is all too obviously a very low budget production.

We start with Police Captain Bert Rawley (Robert Shayne) tracking down Ray Patrick (Paul Langton) to a seedy motel in a small town in northern California. Patrick is a Homicide detective who’d worked under Rawley but he’s gone off the rails and assisted a blonde female prisoner to escape. Patrick then tells his story in an extended flashback.

It started with a routine case. Middle-aged businessman Frank Dean had been murdered. His lady friend Eden Lane (Barbara Payton) is the obvious suspect. The only unusual aspect of the case is that Dean had been thrust into a fireplace and his hands and face had been so badly burnt as to make identification a problem. This is a definite weakness in the plot - everybody acts on the assumption that of course the body belongs to Frank Dean since it was found in his apartment but would any real-life police officer, or any real-life court, accept such a dubious identification? 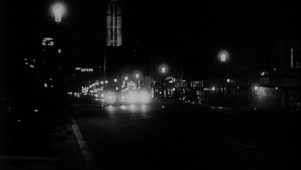 Nonetheless the police do assume the body is Dean’s, and Ray Patrick is given the task of making a fairly perfunctory investigation. He talks to Eden’s roommate Patsy Flint (Tracey Roberts) and is soon on Eden’s trail, tracking her down to a mountain cabin. He arrests her and she is convicted.

Shortly afterwards Detective Patrick is assigned to accompany the prison matron escorting Eden to another prison. When the train makes a brief stop in a small northern California town Eden spots a man on the platform. The man is Frank Dean! She is so convinced of this that she manages to persuade Ray Patrick that she really has seen the man she supposedly murdered. Patrick realises that the woman he arrested and caused to be convicted could be innocent. Of course the sensible thing to do would have been to escort her to the prison and then go back and investigate. But if film noir protagonists made sensible choices we’d have no film noir, so Patrick helps Eden to escape. 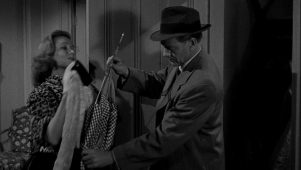 He tells her he’ll give it one week. If by the end of that week he hasn’t turned up any evidence that would clear her he’ll take her to the prison.

Of course Patrick’s motives are not as straightforward as a mere desire to prevent an innocent women from being imprisoned - he has fallen for her and he has to believe she’s innocent because he loves her.

After six days he has found a few interesting leads but he is a long way from proving a case. And then Eden disappears. And then Captain Rawley shows up. In true noir style the world is starting to come crashing down on Ray Patrick. He’s thrown away his career, he is likely to face criminal charges and the woman he did all this for has vanished. He does get one lucky break - he persuades Captain Rawley to give him another 24 hours and Rawley agrees and offers to help Patrick in his attempt to break the case. 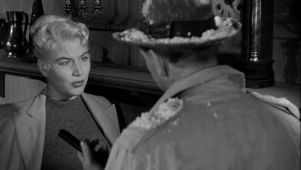 The story is fine. It is a bit contrived but it has an authentically noir feel to it, with betrayal, murder and blackmail. The characters are fine. Ray Patrick is a standard noir hero who is dragged down into a nightmare world by an attractive blonde. Eden is not a femme fatale but in plot terms she serves the purpose well enough - she tempts Ray Patrick in giving up everything he has for her.

The problems here are that the acting is not good enough to sell the story, and Ulmer seems to have lacked the motivation to give the film the sorts of stylistic flourishes and the sense of weirdness that characterise his best low-budget work. This is a rather conventionally made low-budget crime flick. Without those stylistic flourishes to balance them the cheapness of the sets and the excessive reliance on rear projection become only too apparent. 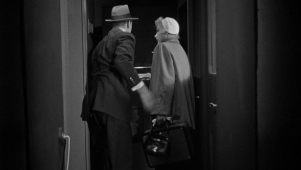 Paul Langton is adequate but lacks any charisma, while Barbara Payton was already far advanced in her systematic campaign of self-destruction and lacks the verve (and much of the sex appeal) that she displayed in her earlier movies.

The Warner Archive made-on-demand DVD looks about as good as such a low-budget can be expected to look.

Murder Is My Beat is unfortunately merely a routine ultra-cheap B movie and while Ulmer completists will want to at least rent it it’s difficult to recommend this movie.
Posted by dfordoom at 5:49 PM