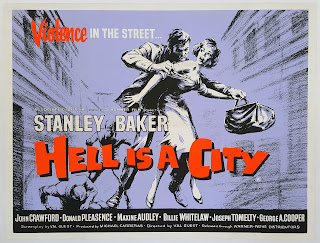 Britain's Hammer Films had made quite a few film noir-flavoured crime B-movies in the early 1950s. In 1960 they returned to the crime movie, but this time on a slightly more lavish scale, with the excellent Hell Is a City. Val Guest wrote and directed this gritty crime thriller which is really more of a police procedural than a full-blooded film noir.

Inspector Harry Martineau (Stanley Baker) of the Manchester City Police had been responsible for sending Don Starling (John Crawford) down for a long stretch. Now Starling has broken out of prison and Martineau wants very badly to send him back there. Starling badly injured a warder in the course of his gaol break so the whole force is equally anxious to get him. Reports of sightings of Starling have come in from all over the country but Martineau is convinced he will turn up in Manchester again.

Martineau’s judgment proves to be correct. Starling is back in the city, and being on the run he needs money. A lot of it. If the warder dies (which seems likely) it will be murder so Starling intends to skip the country. To raise the cash he organises a robbery, using the same accomplices who had been with him on his last job, the one he got sent down for. His plan is to rob bookmaker Gus Hawkins (Donald Pleasence). Actually the plan is to rob the bookie’s two clerks while they’re on the way to the bank with the previous day’s takings.

The robbery goes like clockwork, apart from one small detail. The gang had bundled 19-year-old Cecily Wainwright into the car with them and she started screaming so to shut her up Starling hit her. He hit her hard. Too hard. Starling could find himself facing two murder charges. But they can only hang you once so Starling is now more dangerous than ever.

Martineau and his sergeant, Devery (Geoffrey Frederick), get a lucky break on the Hawkins robbery case. Some of the money included in the bookie’s takings was stolen money, money that had been marked with a dye. Anyone touching that money will have their hands stained green.

Martineau doesn’t yet know that Starling was involved in the Hawkins robbery but he has his suspicions. Meanwhile an increasingly desperate Starling is looking for a place to hide out.

Stanley Baker was one of the great British screen actors and he gives another fine performance here. The movie’s focus is as much on Martineau, and on his increasingly rocky marriage, as it is on the hunt for Starling. Martineau is under pressure both at home and on the job. But that’s not going to distract him from hunting down Starling. Martineau takes his job very seriously. Baker shows us just the right amount of Martineau’s sensitive side and he does it subtly, the inspector not being the sort of man who likes to reveal his inner feelings.

John Crawford is good as the violent and ruthless Starling. Donald Pleasence gives a nicely judged performance as Gus Hawkins, the bookmaker who turns out to be a rather kindly man with his own marital problems.

Billie Whitelaw gets the femme fatale role as Gus’s wife Chloe, who happens to be an old flame of Don Starling’s. Poor Gus didn’t know what he was getting into when he married Chloe. Whitelaw is terrific. The other supporting players are solid.

Val Guest did some notable movies for Hammer and this is one of his best. While it’s not really noir it is very stylish, as you’d expect with Guest directing and Hammer’s ace cinematographer Arthur Grant behind the camera. British thrillers of the 50s often seemed to end with chases over rooftops and the one in this film is particularly well done.

Hammer became noted for their ability to make movies that looked more expensive than they were and this film certainly looks impressive.

Hell Is a City is a fine example of the superb thrillers the British film industry was making at this period. It’s a perfect blending of police procedural and thriller elements, well-crafted and well-acted. A thoroughly entertaining crime movie. Even if it’s not really noir fans of that genre will still find plenty to enjoy here. Highly recommended.
Posted by dfordoom at 9:59 AM