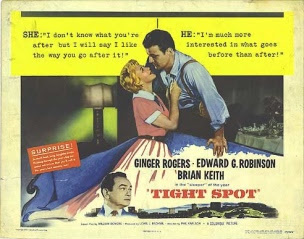 Tight Spot sounds like a movie that has the makings of a nifty little film noir thriller. With Phil Karlson directing our hopes are going to be even higher. What we actually get is something rather different, but it’s still something worth seeing.

Lloyd Hallett (Edward G. Robinson) is a government attorney who’s been trying to nail mobster Ben Costain (Lorne Greene). Finally he thinks he may have a chance. He can’t get Costain on any serious criminal charge but he might be able to get Costain’s US residency revoked, on the grounds that Costain perjured himself when he applied for residency may years earlier. That way he can at least get Costain deported. And if he succeeds it’s just possible that he may be able to get people to come forward to testify against the gangster on more serious charges. But first he needs a witness to prove that Costain perjured himself. He had one but that witness is now kind of deceased, very suddenly. Getting pumped full of lead tends to make you get deceased pretty quickly. 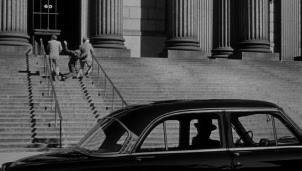 Now Hallett has only one remaining possible witness - Sherry Conley (Ginger Rogers). Conley is serving time in a women’s prison, but if she can be persuaded to testify Hallett’s chances of nailing Costain are good. Of course persuading Sherry Conley might take some doing. Sherry is no fool and she has the idea that getting on the witness stand might lead to her becoming suddenly deceased as well.

The first step is to get Sherry somewhere safe. That job falls to detective Lieutenant Vince Striker (Brian Keith). Vince and Sherry don’t exactly hit it off. Policemen aren’t Sherry’s favourite people. Vince has other problems besides the fact that Sherry isn’t a fan of cops. Costain’s goons are going to be after her very soon and keeping her alive will be enough of a challenge. Getting her to agree on taking the witness stand seems like it’s going to be pretty challenging as well. 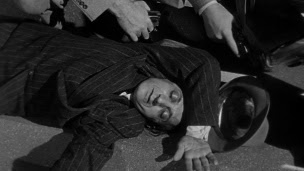 It’s a pretty standard crime thriller plot but plenty of excellent movies have been made with that kind of material. The surprise here is that the focus is not on the thriller plot so much as on Sherry herself, and on the tense love-hate relationship that develops between her and Lt. Striker. This is a character-driven piece rather than a plot-driven one. That means it’s going to have to rely very much on the performances on the three main players, and especially on Brian Keith and Ginger Rogers.

Ginger Rogers’ brilliance as a dancer is what her fame is always going to rest on but she was always a pretty decent actress. Casting her as a convict might not seem obvious but  Sherry Conley is not just hardboiled, she also has a wry sense of humour and she’s fundamentally good-natured even if that good nature has taken a few knocks along the way from the kind of life she’s led. It’s the sort of role Rogers was quite capable of handling and she does it very well here. 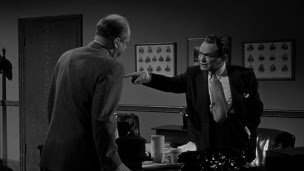 Brian Keith is a somewhat underrated actor who also has the ability to be hardboiled and gruffly sensitive. It’s obvious from the start that he and Rogers are going to work well together. With Edward G. Robinson in good form as well the movie’s focus on the characters rather than the plot works better than you might expect. Katherine Anderson as kindly prison warder Willoughby (who has to help baby-sitting the state’s prize witness) and Lorne Greene as mobster Costain provide good support.

With Phil Karlson in the director’s chair and Burnett Guffey doing the cinematography the thriller aspects of the movie are in good hands. Most of the action takes place in a hotel room which offers fewer possibilities than usual for getting a distinctive noir look. It also means the movie runs the risk of seeming very studio-bound but in fact the hotel room setting gives the movie a nicely claustrophobic feel. Lt Striker and Sherry are essentially in a trap. They’re not just in danger if they leave the room, they’re in danger if they stay there as well. William Bowers’ screenplay has enough in it, and just enough twists, to keep us interested. The DVD transfer (in the Columbia Film Noir Classics III boxed set) is slightly grainy but is in general extremely good. It’s widescreen and anamorphic and contrast is good.

This is a tense study of a woman who has to overcome a considerable sense of grievance and self-pity. She has to learn that taking responsibility and giving instead of taking might actually be the key to rebuilding her life, and most of all she has to learn to believe that her life really can be rebuilt. She has to see herself as being worth something. To do this she has to learn to trust people, but if you’re going to do that you have to make sure you trust the right people.

Ginger Rogers’ fine performance is really the movie’s strongest point but it’s a good little noir thriller as well. Highly recommended.
Posted by dfordoom at 1:03 AM