PRC was just about the bottom of the barrel as Hollywood studios went in the golden age so it’s always best not to approach one of their releases with excessively high expectations. Having said that, The Lady Confesses is a pretty decent murder mystery with a faint tinge of noir.

Larry Craig (Hugh Beaumont) and Vicky McGuire (Mary Beth Hughes) are planning to get married. Or at least they were, until Larry’s wife turned up one day. Norma Craig had disappeared almost seven years earlier. Once the full seven years is up the court will consider her to be legally dead and Larry and Vicky can marry. So Mrs Craig’s sudden reappearance is inconvenient to say the least. 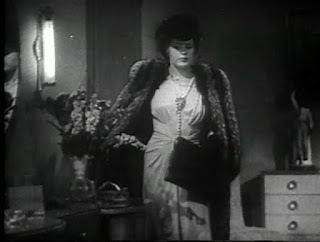 That inconvenience is soon removed. Norma Craig is found dead. Murdered in fact. Given that Larry and Vicky both had motives for wanting her permanently out of the way it’s not altogether surprising that the idea that one of both of them might have murdered Mrs Craig  has occurred to the cops. Captain Brown (Emmett Vogan) has certainly given the idea some consideration.

Larry has a reasonably good alibi. Several people saw him at the 711 Club on the evening his wife was killed, although curiously enough club owner Lucky Brandon (Edmund MacDonald) denies having seen Larry. That’s odd, since they had a conversation in his office and somewhat later that night Larry saw Lucky come in the back door of the club. Coming in the back door is something else that Lucky denies, so the thought has now occurred to Larry and Vicky that Lucky might have been involved in the murder. 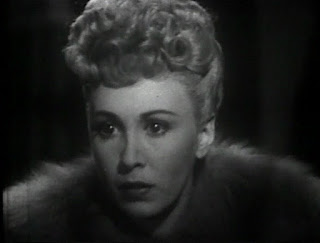 Vicky has no alibi at all so it’s a matter of some urgency that the police should find the killer as soon as possible. So Vicky decides to play at amateur detective for a while. And of course goes very close to getting herself killed in the process.

Mary Beth Hughes was a more than competent actress who made a lot of movies and her filmography includes a number of movies in the film noir and mystery genres. She gives a fine performance here. She was quite capable of playing the femme fatale (and did so to considerable effect in Anthony Mann’s very underrated The Great Flamarion) but in The Lady Confesses she’s the heroine, and a rather bright and breezy one. 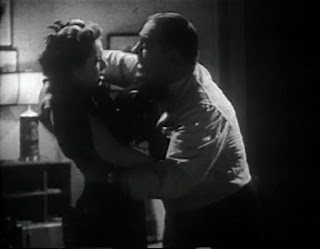 Hugh Beaumont is quite adequate as the male lead. The Poverty Row studios lacked the roster of talented character players that all the major studios possessed but the supporting cast here is not overly bad, with Claudia Drake being quite good as night-club chanteuse Lucille (who seems to know more about the murder than she should).

Sam Newfield was an incredibly prolific director of B-movies, mostly of the very low budget variety, for an assortment of Poverty Row studios. He had a reputation for being able to churn out movies very quickly and on budget. Within the inevitable limitations entailed by rock-bottom budgets he was quite competent and he does a solid job with this one. The low budget helps to make this movie look more noir than it intended to be. You always get plenty of shadows in a PRC movie - they don’t want you looking too closely at their threadbare sets. Combined with the sleazy glamour ambience that always comes from night-club settings this is just enough to qualify this offering as a film noir. 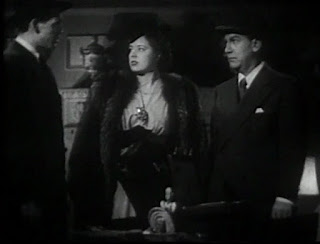 Alpha Video’s DVD release is about what you expect from that company. Picture and sound quality are fairly poor but the movie is still quite watchable.

The Lady Confesses is a reasonably diverting way to spend 64 minutes. It’s no masterpiece but it’s worth a watch for fans of 1940s crime B-movies.
Posted by dfordoom at 6:17 PM