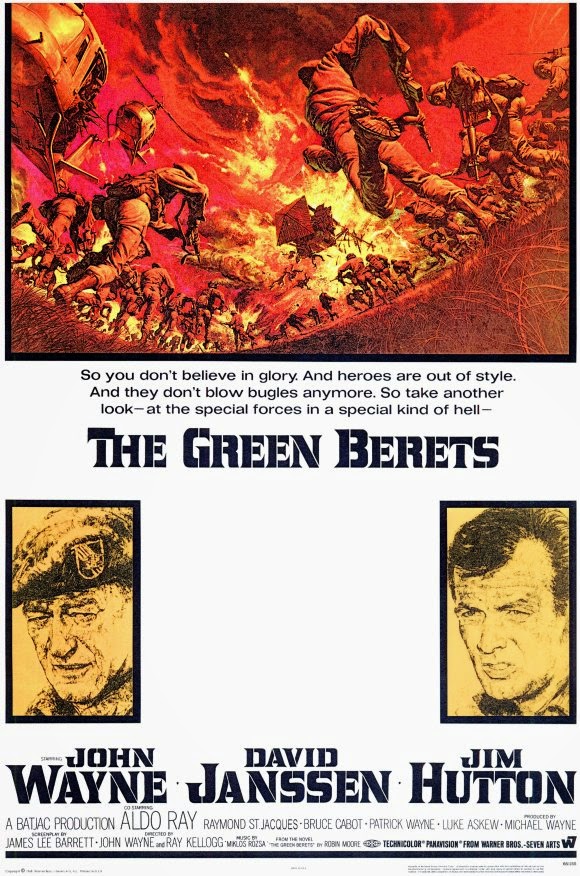 The Green Berets was John Wayne’s Vietnam War movie, so as you might expect it’s very different from the later crop of movies on that subject. It’s an old-fashioned war movie, but that’s no bad thing.

This was a movie that Wayne very much wanted to do and it was made by his own production company, Batjac Productions. Wayne also gets a credit as co-director.

Wayne stars as Colonel Mike Kirby, commander of an elite Special Forces group (the US Army Special Forces were known as the Green Berets from their distinctive headgear). Kirby arrives in Vietnam to take command of a base camp under construction. Construction of the camp is proving to be rather difficult due to incessant Vietcong mortar attacks. In fact before the camp is finished it comes under full-scale attack, providing the opportunity for some fairly spectacular combat scenes.

Before leaving the US Kirby had had a bit of a run-in with an anti-war newspaper reporter, George Beckworth (David Janssen). Beckworth tells Kirby the US has no business being in South East Asia. Kirby asks him if he’s ever been to South East Asia. When Beckworth replies in the negative Kirby just says, “Uh-huh” and walks away. Beckworth then decides to head for the war zone himself where he is confident he’ll find evidence to prove his case. The situation he actually finds there is not at all what he’d expected. He is shocked by the brutality of the Vietcong and by their atrocities against civilians. He later remarks to Kirby that if he tells the truth about what he’s seen he’ll probably lose his job, a telling (and depressingly accurate) reflection of the media’s treatment of the war.

One of the soldiers selected Kirby for his force is Sergeant Petersen (Jim Hutton), a man with a remarkable talent for securing desperately needed equipment. Petersen doesn’t go through official channels - he simply commandeers whatever is needed. Petersen finds himself adopted by a young Vietnamese orphan, a boy who has lost everything he ever cared about. Petersen’s fondness for the boy could have been merely an excuse for introducing an element of sentimentality but in fact it’s a key element of the movie. It personalises the conflict. The orphan boy is after all what the war is all about - trying to create a future for civilians whose lives have been devastated by Vietcong atrocities.

The latter part of the movie is almost like an episode of Mission: Impossible as the Green Berets carry out a daring plan to kidnap a top Vietcong commander. But since the Special Forces exist in order to carry out these kinds of unconventional operations it makes sense to include this element.

This is a movie that sent opponents of the war into a frenzy of self-righteous indignation and it has been widely dismissed as mere propaganda. In fact it’s no more propagandistic than the later widely praised anti-war movies. It’s obvious when reading most reviews of the film that its critics had already decided it was a bad movie before they had even seen it. It’s actually a pretty good war movie and it’s nowhere near as unrealistic as most of the anti-Vietnam War movies that these same critics go into raptures about.

The action sequences are well executed. The movie makes no attempt to gloss over the horrors of war and the violence is quite graphic by the standards of 1968.

John Wayne does a fine job as Kirby. Playing hardbitten heroes with a sensitive side is the sort of thing he always did well. The supporting cast is strong, with Aldo Ray standing out. George Takei of Star Trek fame is excellent as a tough South Vietnamese officer. David Janssen is good as the reporter who finds that the reality of war doesn’t match his prejudices. His role is perhaps the one unrealistic element in the movie - the idea of a journalist admitting to being mistaken stretches the limits of credibility to breaking point!

The Green Berets is a movie that wears its political incorrectness like a badge of honour. Unlike virtually every other Vietnam War movie it shows respect for brave man who were doing their duty, and it emphasis the patriotism of South Vietnamese fighting for their country’s freedom.

Whether you agree with its politics or not The Green Berets is an effective and exciting war movie that also emphasises the human costs of war. It was a major box-office hit. As John Wayne pointed out at the time, the negative reviews it received  merely succeeded in making it an even bigger hit. Highly recommended.
Posted by dfordoom at 2:23 AM