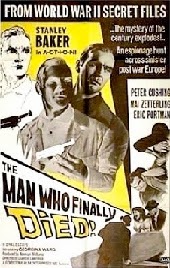 The Man Who Finally Died is a fine example of the excellent thrillers the British film industry seemed to be about to turn out at will from the late 1940s to the early 1960s. This one is a spy thriller made in 1963 although the spy theme does not become apparent until quite late in the movie.

The story is very much in the tradition of the spy thrillers of Eric Ambler, with a very ordinary man suddenly becoming caught up in events that are beyond his comprehension and control. Joe Newman (Stanley Baker) is an English jazz pianist who has come to Germany in response to a letter from his father. This is decidedly odd, since his father died twenty years before. Or so he had always believed.

Joe Newman has not always been Joe Newman. He was born Joachim Deutsch. His mother had taken him to England when the war broke out. He has grown up as an Englishman although he has always known that he was German-born. His father, a soldier in the German army, had been killed in action.

Now it transpires that his father, Kurt Deutsch, had in fact been captured by the Russians. He spent years in a Russian prison camp, finally escaping a couple of years ago. But when Newman arrives in Germany he is told that he is too late, his father died two days earlier.

He is somewhat surprised to find that his father has left a young widow. Kurt Deutsch and his young wife Lisa had been living in the home of Dr Peter von Brecht (Peter Cushing), a wealthy philanthropic doctor who is in charge of a displaced persons camp.

Joe starts to have doubts about the story he has been told. There are several things that don’t add up. Why was his father, a Protestant, buried in a Roman Catholic cemetery? Joe has several other niggling doubts and starts to do some digging. The more he digs the more sceptical he becomes. He believes that there has been some kind of plot, but for what possible reason? His meeting with an insurance investigator reinforces his suspicions. Perhaps Joe’s father is not really dead?

There certainly has been a conspiracy but Joe Newman is on the right track, and at the same time on the wrong track. He is right in thinking that things are not what they seem to be but the real truth will only be revealed after several further major plot twists.

Stanley Baker was always a fine actor and he does well here as a strong-willed man who will not let things lie. Joe is a decent guy but when he thinks he’s being lied to he becomes  very stubborn. He is not by nature an action hero but he is caught up in dangerous games and will be forced to play that role.

Peter Cushing is in fine form as the charming Dr Peter von Brecht, a man who is a little too good to be true. Cushing gives him a sinister edge but keeps it subtle. Eric Portman as Inspector Hofmeister proves capable of matching Joe Newman’s stubbornness. He does not like amateurs telling him how to do his job. Mai Zetterling provides good support as Lisa Deutsch. Georgina Ward got her first film role as a girl from the displaced persons camp caught up in in events she doesn’t understand. Ward subsequently appeared mostly in television role until her career petered out in the early 70s. Nigel Green’s role is unfortunately a minor one but it’s always fun to see him.

Director Quentin Lawrence made only a couple of movies but had a prolific career as a television director. His approach is efficient if not particularly inspired. He does handle the climactic action scene on the train very capably (and you really can’t go wrong ending a thriller on a train).

On of the movie’s strength is its atmosphere. The war hangs over the film like a dark shadow. Joe’s great fear is that his father may have been involved in something very unpleasant but he is determined to uncover the truth no mater how unpalatable it may be. The German setting evokes both the Second World War and the Cold War and the sense of postwar disillusionment and the lingering sense of guilt, the idea that heroes might not be as heroic as hoped and that instead of creating a clean new world the war had left a legacy of moral ambiguity. There’s a sense throughout the movie that the secrets of past may come back to haunt us.

The Man Who Finally Died has been released on DVD in Region 2 by Network DVD in an excellent 16x9 enhanced transfer.

The complex performances of Stanley Baker and Peter Cushing make this something more than just a routine thriller. Highly recommended.
Posted by dfordoom at 12:00 AM