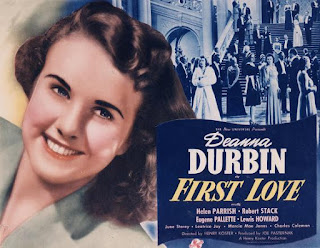 Deanna Durbin was already a very big star indeed when she made First Love for Universal in 1939. In fact she was so big a star that she was practically keeping Universal afloat single-handedly. Robert Stack on the other hand was making his film debut and this movie would make him a star.

First Love is a reworking of Cinderella. Connie Harding (Durbin) is an orphan. After graduating from boarding school she is sent to New York to live with her aunt and uncle. It’s immediately obvious that the household revolves around her cousin Barbara (Helen Parrish). Barbara is not the ugly stepsister, She’s the beautiful glamorous cousin but that turns out to be just as bad if not worse. Barbara gets everything she wants. She is spoilt, vain and shallow. 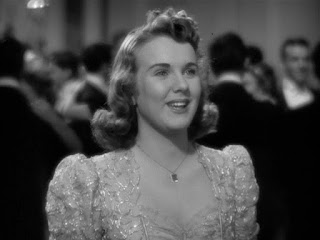 Connie is not exactly made to feel wanted. Barbara ignores her unless she has some errand for Connie to run. Barbara’s mother Grace (Leatrice Joy) is not an unpleasant person, she simply isn’t interested in anything much apart from astrology and her wonderful daughter. Uncle Jim (Eugene Pallette) makes a point of never being at home at the same time as his wife and daughter. Barbara’s brother Walter (Lewis Howard) is cynical and lazy but basically harmless and with a rather realistic view of his family.

Since this is Cinderella there is of course a ball. And of course it looks like Connie won’t get to go, until her Fairy Godmother steps in. She doesn’t actually have a Fairy Godmother  but she does have the household staff who took an immediate liking to her and they turn out to be every bit as useful as an actual Fairy Godmother. She does go to the ball and she gets to dance with a handsome prince. The prince is Ted Drake (Robert Stack) and while he might not be a real prince he’s rich handsome and charming and he’s as close to a prince as you’ll find in New York City. 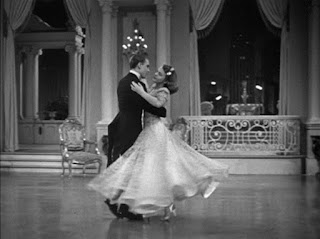 But of course at midnight Cinderella must leave the ball, leaving behind her only a slipper. It’s not much of a clue but Ted Drake is determined to find that slipper’s owner.

Charming is the word that seems to be most often used to describe Deanna Durbin. Maybe she wasn’t the world’s greatest actress but her performance here is more than capable. She handles the light comedy with ease and she makes Connie sympathetic without sentimentality. Connie is of course supposed to be totally overshadowed by her more beautiful more glamorous cousin and Durbin manages to convey this without making Connie dull or earnest. In fact Connie might not be a glamour queen but she is likeable and amusing.

I wouldn’t describe Durbin as a stunning beauty but she has a wholesome Girl Next Door prettiness. 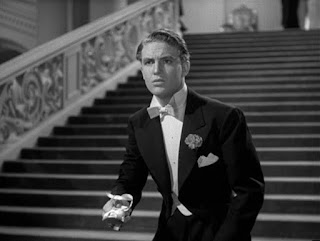 Robert Stack is so unbelievably young I didn’t recognise him at first (he was all of twenty when he made this picture). He does the Prince Charming thing with a pleasing natural ease.

The supporting cast is superb. Barbara is a nasty piece of work and Helen Parrish has a great deal of fun with the role. Uncle Jim turns out to be the worm that finally turns and Eugene Pallette is delightful. Charles Coleman is very good as the loveable butler George. It’s really unfair to single anyone out though since they’re all so good.

This is not really a musical. It’s a romantic comedy with some musical interludes. The musical interludes are not necessary but since Deanna Durbin was a noted singer it would have been pretty silly not to give her the chance to sing a few songs, which she does rather nicely. 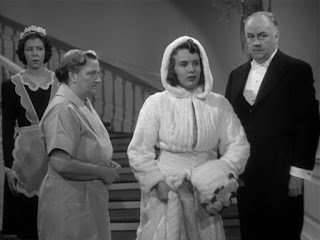 Henry Koster directed quite a few of Durbin’s films and apparently acted as the young star’s mentor. He can’t be faulted for the job he does here.

The romance is certainly there but it’s also genuinely very amusing. It follows the Cinderella story surprisingly closely and it does so with wit and style.

Simply Media’s Region 2 DVD is barebones but the transfer is good. This movie is also available on DVD in Region 1 as part of Universal’s Deanna Durbin Sweetheart Pack boxed set.

First Love is very much a feelgood movie. It’s funny and clever and it’s insanely romantic. Highly recommended.
Posted by dfordoom at 10:12 PM