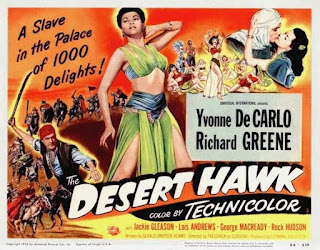 Universal’s The Desert Hawk promises swashbuckling adventure and romance and that’s what it delivers. And it looks gorgeous.

Ignore the opening voiceover that tells you the story happened 2,000 years ago. In fact this is obviously the world of Islam. It’s a kind of Arabian Nights tale but with no supernatural elements or monsters.

The beautiful Princess Scheherazade (an obvious nod to the Arabian Nights) is betrothed to Prince Murad (George Macready). Prince Murad is a bit of a tyrant, in fact he’s an out-and-out villain and his tax collectors have been oppressing the common people. His tyranny is being challenged however, by a man known only as the Desert Hawk. No-one knows his real identity but when not adventuring he works as a humble blacksmith under the name of Omar. The Desert Hawk is very much a Robin Hood figure, which is rather appropriate since Richard Greene went on to play Robin Hood in the celebrated British TV series. 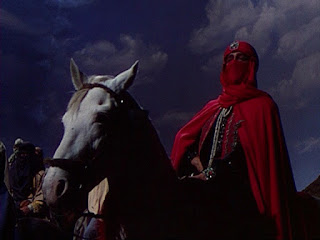 Princess Scheherazade (Yvonne de Carlo in one of her many roles in swashbuckling adventure films) is your typical princess - she’s haughty and proud and quick-tempered and she’s used to getting what she wants. Her father is the caliph and he’s a very indulgent father so she doesn’t have to marry the prince unless she wants to. Once she meets him though the matter is quickly resolved. He is handsome and dashing and very romantic and she agrees to marry him that very day. Judging by her demeanour the next morning it’s fair to assume that she found her wedding night to be more than satisfactory. She has everything a girl could want but there is one fly in the ointment. It turns out that the man she married (and with whom she spent that blissful night of love) is not Prince Murad at all. She has married the Desert Hawk!

She is more than a little displeased by this development. Her life is about to get even more complicated. There are nefarious plots afoot and the princess is kidnapped, but she swapped clothes with one of her handmaidens so the kidnappers have the wrong girl. Meanwhile Scheherazade herself, whom they assume to be merely a handmaiden, is to be sold at the slave market. 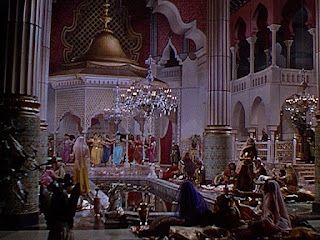 Omar will have to find a way to rescue his new bride and that will be a challenge as there are multiple villains to deal with. The villains are more than willing to murder and they’re delighted by the prospect of torturing captive princesses. There’s also the slight problem that the princess, having been tricked into marriage, is sufficiently annoyed that she might well persuade her father to put Omar to death for his presumption in tricking his way into her bed.

There’s a good mix of action and romance and there’s some comedy as well. Fortunately there’s not too much of the comic relief and what there is is quite amusing. There are the obligatory narrow escapes from death. 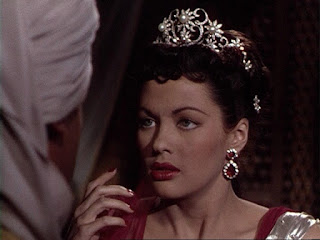 Richard Greene certainly knew a thing or two about swashbuckling and he makes a splendid romantic hero. Yvonne de Carlo wasn’t thrilled to find herself cast in these types of films but in fact they suited her perfectly. She does the feisty proud heroine thing superbly, and she looks absolutely stunning in Arabian Nights-style costume. There’s a reasonably good romantic chemistry between the two leads, interspersed with plenty of verbal sparring.

George Macready is a fine villain. Look out for Rock Hudson is a supporting role. Had this movie been made a couple of years later he would undoubtedly have landed the lead role.

Frederick De Cordova was a solid journeyman director who had something of a flair for adventure movies. He keeps things moving along very nicely. 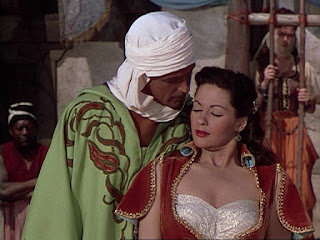 This was a Universal feature so the budget would have been fairly modest but it looks quite impressive and the exotic atmosphere is convincing. It was shot in Technicolor. The sets and the costumes are splendid. It might be basically a B-movie but it manages to look a bit more lavish than most such productions.

The Desert Hawk is definitely an above-average movie of its type with enough plot twists to keep things interesting and a very good cast. Swashbuckling fans and admirers of Yvonne de Carlo won’t want to miss this one. Highly recommended.
Posted by dfordoom at 5:30 PM