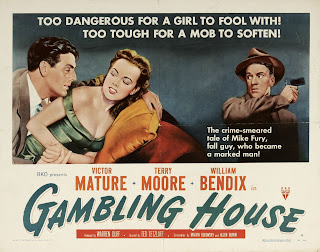 Gambling House has an opening that suggests that it’s going to be a fairly decent film noir. Within ten minutes though the awful truth becomes apparent. This is not a film noir. It’s a Social Problem Movie. And if there’s one type of movie that should be avoided at all costs it’s the 1950s Hollywood Social Problem Movie. This 1950 RKO production is a particularly dreadful example of the breed.

Marc Fury (Victor Mature) is a gambler and he has a few problems. Firstly he’s close to broke. Secondly he has a bullet in his guts. And thirdly he’s about to be made an offer that he really should not contemplate accepting. 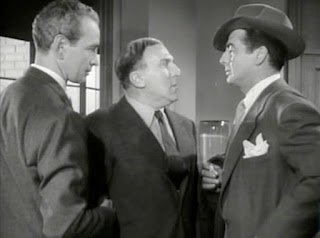 Joe Farrow (William Bendix) owns a string of gambling joints. He’s successful but he’s inclined to do rash things. In this case he gunned down a gambler who was making trouble after figuring out that he was being fleeced. During the course of the brief gun battle Marc was shot accidentally. Now Farrow offers him $50,000 to take the rap, with the promise that his hot-shot lawyer will get him off on a plea of self-defence.

Everything seems to be working out until the immigration people decide to deport Marc. Marc had always assumed he was an American citizen but he wasn’t and since he hasn’t exactly been law-abiding there seems little chance of the deportation order being reversed. To add to his woes Farrow seems to be remarkably reluctant to hand over the fifty grand he’d promised him. 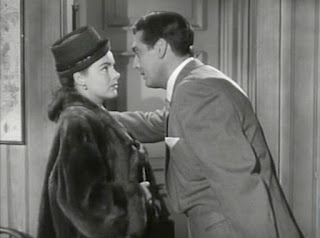 Marc isn’t completely stupid. He’s got hold of Farrow’s little black book that contains all sorts of incriminating evidence against the gambling joint owner. This is Marc’s insurance but in an awkward moment he drops the book into the coat pocket of random stranger Lynn Warren (Terry Moore) hoping that it will be easy to retrieve it later. By the kind of amazing coincidence you only encounter in really bad writing and bad movies the random stranger happens to be a girl who works for an agency that helps people with immigration problems.

At this point the main plot grinds to a halt and we get a dull love story combined with speeches about the plight of immigrants and what it means to be an American citizen plus messages about how even a guy like Marc can be saved by the Love of a Good Woman. To make things worse we also get a clumsy and irrelevant sub-plot about a Polish immigrant family. And we get more speeches. Lots of speeches. 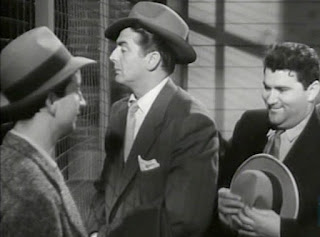 Finally the main plot kicks in again. You might think that would be good news but it’s all so contrived and unconvincing that it actually turns out to be bad news.

This is one of those movies in which the characters do things that are totally out of character and entirely unbelievable simply because the script demands it. This makes it hard to judge the acting. Victor Mature tries hard but Marc’s actions are simply not believable and Mature is not at his best delivering inspiring speeches. I’m actually a big fan of Victor Mature as an actor but his performance in this movie just doesn’t work due to the awful script.

Terry Moore’s performance is dire but again with a script like this even the best actress would be struggling. Lynn comes across as irritating and self-righteous. William Bendix is flat and dull. 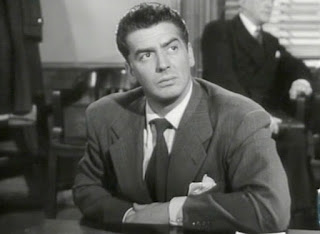 Visually there are a few good moments at the start and a few at the ending but what could have been an evocative film noir ending is ruined because we don’t for a moment believe the actions of any of the characters involved, and by that time it’s unlikely that any viewer will even care how the film ends as long as it ends soon.

Gambling House is a movie that is incredibly poorly paced and structured and it’s embarrassingly clumsy. It’s annoyingly emotionally manipulative but the manipulation backfires because the characters are so unconvincing. It’s a total waste of time. Do whatever you have to do to avoid seeing this movie.
Posted by dfordoom at 12:07 AM