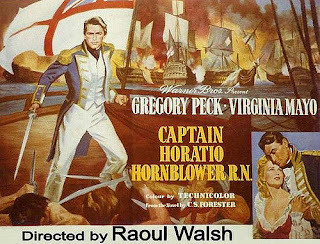 When Warner Brothers decided to bring C.S. Forester’s extremely popular Hornblower naval adventures to the big screen they certainly picked the right director. No-one could doubt Raoul Walsh’s ability to handle an action adventure movie. Their choice of actor to play Hornblower might have been a little surprising but in fact Gregory Peck is absolutely perfect.

The movie is based on the first three Hornblower novels to be published, and especially  the very first Hornblower book, The Happy Return. C.S. Forester had some involvement with the script.

It is 1807 and the British frigate Lydia has been at sea for seven months. Not just at sea, but out of sight of land. This is in accordance with the Admiralty’s orders and Captain Horatio Hornblower has chosen to interpret his orders very literally indeed. The crew of the Lydia are close to breaking point. Food is running low, fresh water is running even lower, scurvy is stalking the ship and there has been not a trace of wind for a disturbingly long time. Having gone seven months without sighting land there is of course considerable doubt as to whether they are actually anywhere near the spot at which they have been ordered to make landfall. Captain Hornblower has his doubts as well but there is no way he is going to let those doubts show. 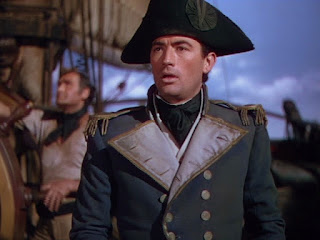 Their problems are far from over when they do reach their destination. They are carrying arms to a renegade Spanish governor and Hornblower’s orders are to give the fellow (who has named himself El Supremo) every assistance in his rebellion against the Spanish crown. Spain being at this stage a deadly enemy it naturally follows that anything that causes headaches for the Spanish is a good thing for the British. But circumstances have changed in ways that Hornblower could not have anticipated, and things are about to get very complicated and very dangerous. 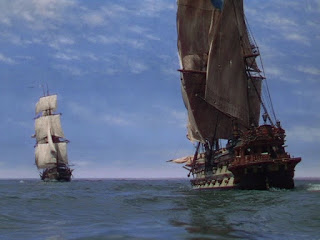 Fighting sea battles against impossible odds is a challenge to which Hornblower is equal but he will find himself facing something much more terrifying when he is forced to take aboard a lady passenger. Lady Barbara Wellesley is charming and can be a most stimulating companion but the situation has the potential to be very awkward, given that Lady Barbara is engaged to an admiral and is the sister of Sir Arthur Wellesley (later to be Duke of Wellington). Lady Barbara’s family is a formidable one and Hornblower, without any powerful or influential friends or family connections, is sailing in dangerous waters.

The Hornblower of the novels is by no means a conventional hero. He is filled with self-doubts and self-recriminations and he is a man to whom command does not come easily. He has trained himself to play the part convincingly but he feels that he is a fake. He’s extraordinarily complex by the standards of adventure heroes. A slightly flawed hero who struggles, mostly successfully, to overcome his flaws. He’s also a very introverted and somewhat self-obsessed hero. He’s an admirable character, but he’s admirable in spite of himself. His slightly tense relationships with his junior officers and with the men under his command add yet another layer of complexity. 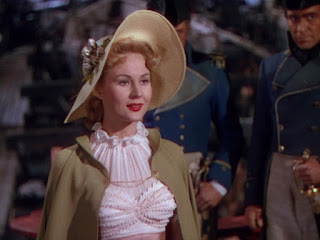 These subtleties would have translated rather uneasily to film, and very uneasily indeed to a Hollywood costume adventure epic. The movie therefore makes Hornblower much more the expected conventional hero. The supporting characters are also made much more conventional. In the novel Hornblower’s first lieutenant is at best barely competent and is totally lacking in imagination. The movie makes him a thoroughly conventional heroic sidekick.

All of this was a challenge for Gregory Peck. Hornblower was a moody introvert and the script had removed much of the interest from the character. Peck really had to work hard to make the most of what he was left with, which was basically a few idiosyncrasies. Fortunately he was up to the challenge and gives a performance that is sympathetic, occasionally slyly amusing and with at least a few suggestions of hidden depth. His Hornblower is a low-key swashbuckling hero.

I’m not sure about Virginia Mayo as Lady Barbara. She’s an actress I’ve never warmed to and there’s no real chemistry between the two leads.

Look out for Christopher Lee and Stanley Baker in minor roles. 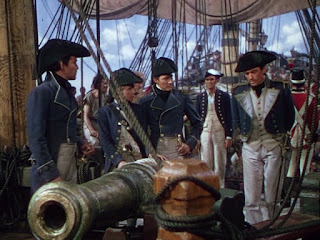 Trying to adapt three novels into one movie was perhaps a mistake. The movie has a bit of an episodic feel to it and the story gets bogged down when Hornblower returns (temporarily) to England. Hornblower is a man who is more at home fighting desperate sea battles than trying to cope with domestic situations and the movie also struggles a little whenever the action slackens.

Technically this is a very impressive movie indeed. The sea battle sequences are absolutely superb and they’re suitably thrilling. Walsh’s mastery of action film-making is very much in evidence.

Although it has a few problems Captain Horatio Hornblower R.N. is still fine entertainment. Gregory Peck is surprisingly effective (and in my view he’s a better and more interesting Hornblower than Ioan Gruffudd in the late 90s TV movies) and the sea battles are magnificent. Highly recommended.
Posted by dfordoom at 5:03 PM