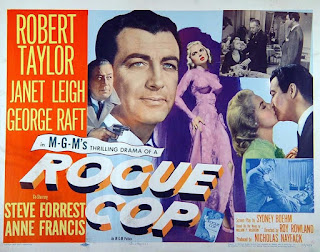 Rogue Cop is a very classy 1954 MGM film noir dealing with a subject, police corruption, that was still rather touchy in the 50s. Robert Taylor stars and there’s a terrific supporting cast - George Raft, Janet Leigh and Anne Francis.

Taylor plays Detective Sergeant Christopher Kelvaney. He’s been accepting pay-offs from mobster Dan Beaumonte (George Raft) in return for doing routine favours. Now Beaumonte wants a very big favour from him. Kelvaney and his rookie cop kid brother Eddie (Steve Forrest) have arrested a rather nasty punk named Fallon for murder. It’s Eddie’s evidence that is going to convict the punk but Beaumonte wants Fallon to be allowed to walk. Fallon is very small fry but apparently he could make life uncomfortable for Beaumonte and his associates, and Beaumonte doesn’t like things that make him uncomfortable. Beaumonte isn’t an unreasonable man. Normally he’d just have an inconvenient witness like Eddie killed, but since Chris Kelvaney has been useful in the past he’s prepared to offer a special deal. He’ll buy Eddie off instead of having him rubbed out. 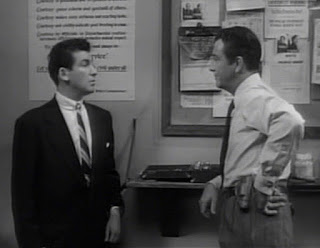 The problem is that Eddie is a real straight arrow. He’s also stubborn and not very bright. He’s an honest cop and he doesn’t make deals with gangsters and he’s not afraid of Beaumonte’s threats. He thinks he can look after himself. Like I said, the kid’s not too bright. Somehow Chris is going to have to persuade him to see sense and it’s not going to be easy and there’s not much time. Beaumonte and his friends already have alternative measures in place for dealing with the Eddie problem permanently.

This movie doesn’t quite follow a standard film noir template. There are women with colourful pasts but they don’t quite fit the femme fatale mould. Chris Kelvaney is not quite a classic noir protagonist - he’s already thoroughly crooked when the story opens. On the other hand while he might be corrupt he hasn’t reached rock bottom. He’s going to find out jus how much further he has to fall. He has no illusions about himself but he sees himself as a realist. It’s a corrupt world. If you try to be honest you’re a sucker. Smart guys accept reality. No-one really gets hurt. Well, nobody that matters. But now things are getting out of control. The one decent thing about Chris is that he cares about Eddie but maybe caring won’t be enough to keep his brother alive. 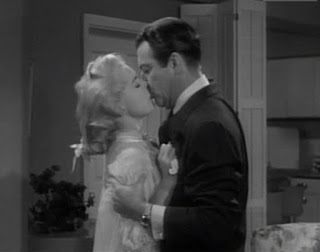 This was one of the darker roles Robert Taylor started to play in the 50s as his matinee idol looks started to fade and his acting skills started to blossom. He does the cynical hardbitten rather worldweary thing extremely well. Chris Kelvaney doesn’t have a high opinion of himself but he thinks that at least he’s a winner. He’s not like the suckers. Now he’s not so sure. He’s starting to feel trapped and his confidence is starting to crack.

The most impressive thing about Taylor’s performance is its unsentimentality. Chris Kelvaney is not a nice guy and Taylor doesn’t try to make him noble or heroic.

By this stage of his career George Raft had grown tired of playing mobsters and heavies but fortunately he was persuaded to accept this role. Maybe there were actors who could play these kinds of roles just as well as George Raft, but there was nobody who could play them better. Dan Beaumonte is very smooth and very self-assured but within his first thirty seconds of screen time Raft has convinced us that this is the kind of guy you don’t ever want to get on the wrong side of. Raft doesn’t need to raise his voice in order to convey purposeful menace. It’s Raft at his best, giving a chilling performance. 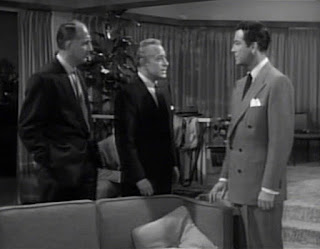 Anne Francis is surprisingly good (in fact excellent) as Beaumonte’s drunken girlfriend Nancy. Beaumonte doesn’t treat her too well but she loves him and she knows that without him she’d be back in the gutter. She alternates between grovelling devotion and alcohol-fuelled defiance. It’s a very effective performance. The Dan Beaumonte-Nancy relationship is one of the nastier film noir relationships. Janet Leigh is quite good as Eddie Kelvaney’s girlfriend Karen, a nice enough girl but one who hasn’t always been entirely respectable.

Visually this movie isn’t quite regulation noir. It’s an MGM movie and it looks a bit glossier than a RKO or a Warner Brothers noir. That’s not really a weakness. This movie is not about street hoodlums. It’s about big time gangsters and their world is pretty glamorous, on the surface at least. 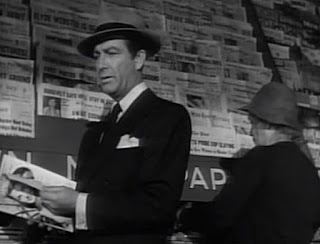 It’s the content, and even more particularly the performances, that make it noir.

Of course this being an MGM movie you might be wondering if Rogue Cop is going to be a bit inclined to pull its punches. It’s hard to answer that question without risking spoilers. Personally I think this film is pretty satisfyingly hard-edged and I think there’s enough here to qualify it as genuine film noir. Director Roy Rowland keeps things taut and he throws in a pretty decent action finale.

Rogue Cop doesn’t seem to have made it to DVD which is a great pity. I caught this movie on TCM and the print they screened was pretty good.

Great performances by Robert Taylor, George Raft and Anne Francis and a tough unsentimental mood add up to a very underrated movie. Highly recommended.
Posted by dfordoom at 3:41 PM