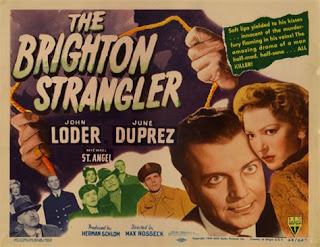 OK, stop me if you’ve heard this one before, but there was this actor who played a murderer in a long-running play and he developed this strange compulsion to act out these murderous impulses in real life. Well that’s basically the plot of RKO’s 1945 programmer The Brighton Strangler. The movie is however rather better (and a good deal more entertaining) than it sounds.

Reginald Parker (John Loder) has achieved stardom on the London stage playing the lead in the hit play The Brighton Strangler. He’s about to marry Dorothy Kent (Rose Hobart), the author of the play. Things are generally looking very good indeed for him. And then a bomb drops on him. Literally. This all takes place during the Blitz and when a bomb hits the theatre Reginald Parker gets a very nasty hit on the head. And it’s that blow on the head that causes all the trouble. 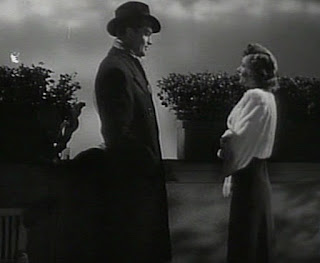 Parker doesn’t remember his name or where he comes from or what he was doing before the bomb hit. He does remember other things though, but unfortunately he can’t distinguish between actual memories and theatrical memories. He has some very vivid memories, and those memories are of strangling people.

He wanders into Victoria Station and there’s a young woman, a WAAF named April Manby, buying a ticket to Brighton. His memory tells him that Brighton means something and that this chance meeting means something - this young woman is like the woman in the play. They get to know each other on the train journey (just like in the play) and he meets her family and is invited over for dinner. 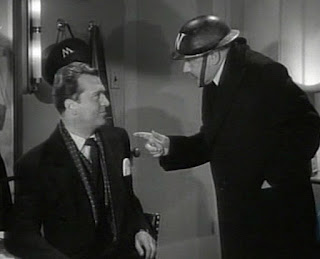 These coincidences make the play seem more and more like reality to him. He remembers the name of the protagonist in the play, Edward Grey, and he is convinced that he is Edward Grey. And there are things he must do. There are wrongs that must be righted. Those who have done great injustices to Edward Grey in the past must be punished. The first to be punished must be the mayor.

It’s unfortunate that Chief Inspector Allison (Miles Mander) is not a fan of the theatre and so he doesn’t notice anything odd about the fact that there’s a hit play about stranglings in Brighton and now he finds himself investigating murders by strangling in that very place.

Meanwhile Edward Grey has other scores he has to settle. 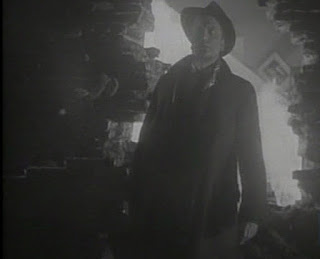 When it comes to movies dealing with psychiatry or abnormal psychology or amnesia or similar topics I’m strongly of the view that the sillier the treatment of the idea the better. When such ideas are dealt with seriously they don’t work terribly well. When they’re dealt with in an outrageous and completely ludicrous manner they tend to be enormous fun. Best of all is when a movie tries to deal with these subjects seriously but the results turn out to be totally unbelievable (a good example being Hitchcock’s Spellbound). The Brighton Strangler takes its premise at least moderately seriously but luckily it all becomes totally absurd and unlikely. That’s what I like about this movie. It cheerfully stretches credibility way beyond breaking point and it keeps on stretching it and it does it with a straight face, and the more it does so the more fun it is.

John Loder is excellent. He very wisely underplays slightly which makes the madness of his actions much more creepy. Even when he’s totally off his rocker he seems quite calm and sane. June Duprez as April is a more than adequate leading lady. Miles Mander was one of those reliable English character actors who could make minor characters such as Chief Inspector Allison so delightful. 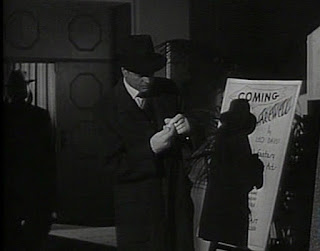 The temptation with this kind of story is to throw in lots of dream sequences (as in Spellbound). There are a couple of very such sequences to give us the idea that poor old Reginald Parker’s mind has slipped its moorings but they’re kept to a minimum (which is probably wise on a tight budget).

Max Nosseck was a competent B-movie director and he gets the job done although perhaps a slightly less pedestrian approach might have paid dividends. The air raid scene is admittedly pretty well done.

A couple of years later the same basic idea was used, with some considerable success, in a Ronald Colman vehicle called A Double Life.

The Brighton Strangler was released on DVD in Spain but doesn’t seem to be available elsewhere. I caught this one on TV.

The less seriously you take The Brighton Strangler the more you’ll enjoy it. Recommended.
Posted by dfordoom at 5:22 PM