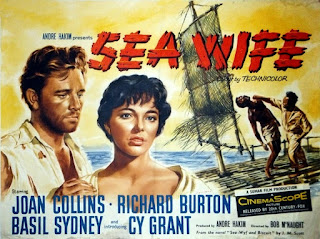 Sea Wife is one of those odd little movies that just doesn’t get made these days. It’s not easy to categorise this 1957 British movie - it’s a romance, a war thriller and an adventure film.

As the film opens a man known as Biscuit (played by Richard Burton) is desperately trying to contact a woman he knows only as Sea Wife. The main story is then told in flashback.

In 1942 a cargo ship packed with a miscellaneous assortment of passengers, all intent on escaping the approaching Japanese Army, leaves Singapore. Shortly afterwards the ship is torpedoed by a Japanese submarine. Four passengers find themselves in a rubber dinghy. There’s Biscuit, there’s a rather aggressive slightly Colonel Blimp-ish middle-aged Englishman who becomes known as Bulldog, there’s the ship’s purser who is christened Number Four and then there’s Sea Wife (Joan Collins). The purser gives her this name, which refers to a kind of mermaid. Sea Wife is in fact a nun, a fact known to the purser, but for some reason she decides not to inform the other two of this fact.

They spend weeks in the rubber dinghy, then are washed ashore on an island which turns out to be somewhat less than a tropical paradise.

Of course there are tensions between these four people. And of course Biscuit, having no idea she is a nun, falls in love with Sea Wife. As for Sea Wife, she clearly has some feelings for Biscuit but it’s also clear that she takes being a nun rather seriously.

The plot does become rather contrived, which tends to happen with stories involving castaways and desert islands. And movies involving castaways and desert islands also have a tendency to use this setup for the purposes of social commentary. Sea Wife is no exception. Number Four is a black man, which gives the movie the opportunity to lecture us on the evils of racial prejudice. The only problem with this is that the Japanese characters are the most incredibly stereotypical evil sub-human monsters you’ll ever encounter in a movie, so the rather confused message seems to be that racial prejudice is very very wrong sometimes but it’s OK at other times.

The main focus is however on the developing romance between Biscuit and Sea Wife, which Sea Wife is determined is not going to be a romance.

The four main cast members are all quite competent. Richard Burton was never quite a conventional romantic leading man but he’s effective enough. He overacts of course, but he always did and he is playing a man who has developed a pretty serious obsession so it’s forgivable.

Joan Collins has by far the most interesting role since she’s not only playing a part for the benefit of the other passengers, she’s also playing a part for her own purposes. Whatever other reasons she may have had for not revealing that she is a nun it does give her the chance to pretend to be a civilian for a while. It’s not that she’s a scheming type of woman, on the whole she’s quite sympathetic but she does cause Biscuit a great deal of confusion and grief. I think she caries off the role quite well - she is supposed to be playing a woman who is not quite sure of her own motivations and her own feelings and she captures Sea Wife’s uncertainties and fears quite well. She also doesn’t overact anywhere near as much as the other three principals!

Basil Sydney mostly doesn’t overplay the role of Bulldog too much. He’s a arrogant kind of chap and he has fixed ideas on various subjects and he can be insensitive but he’s not a monster. The difficulty is that when he does do something terrible it’s not quite convincing. It doesn’t ring true. It’s something that feels like it has been added to make a clumsy political point and it does so in a dishonest and manipulative way. This is just plain bad writing. Cy Grant overacts but the script doesn’t really give him much choice.

Naturally there’s a great deal of overheated romantic melodrama resulting from Sea Wife’s lack of candour about her occupation, with poor Biscuit doing everything he can think of to convince her to accept his love and Sea Wife being torn apart by her own confused feelings. Burton and Collins handle all this reasonably well and they do have the right kind of slightly offbeat chemistry to carry it off.

Sea Wife was shot in Cinemascope and in colour and looks fairly impressive.

Sea Wife is, surprisingly, readily available on DVD in at least Regions 1, 2 and 4. I saw a rental copy of the Region 4 disc. There are no extras but the anamorphic transfer is very good.

Sea Wife really should not work at all. There is just so much about the plot that is so hopelessly contrived and it includes several egregious examples of one of my great pet hates - characters acting out of character just so the writer can make a political point. There’s also the difficulty that there seems to be no convincing reason for Sea Wife’s deception. The ending does work and it feels right. There are all sorts of things wrong with this movie but Richard Burton and Joan Collins are worth watching. And it’s just an odd sort of movie with a certain weird charm. Recommended, but with rather a lot of reservations.
Posted by dfordoom at 4:47 PM