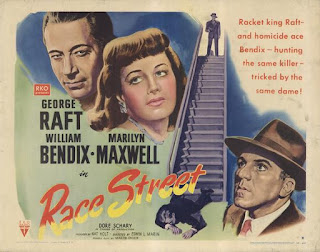 Race Street is an obscure 1948 RKO crime thriller starring George Raft and Raft’s presence is a good enough reason for me to want to watch such a movie.

Dan Gannin (Raft) is a big-time San Francisco bookie. His pal Barney Runson (William Bendix) is a police lieutenant. Dan might be a racketeer but he’s a decent guy and he’s definitely no hoodlum. Barney is an honest cop and he doesn’t approve of Dan’s operation but he doesn’t let him worry him. Maybe there are worse things than people wanting to bet on the ponies, and as long as people want to do that there are going to be bookies. 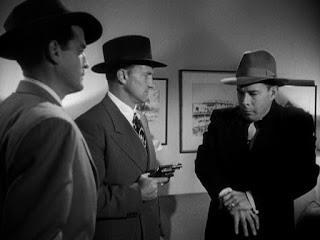 Now there’s a new racket operating in the city. A protection racket. And that’s a whole different ball game. These people really are hoodlums. They’re moving on the city’s bookies. Barney would like Dan’s help but he’s not going to get it. Dan likes Barney a lot but he can’t be seen to run squealing to the cops when he’s in a jam. In Dan’s circle that is frowned upon. Dan isn’t in a jam yet, but he will be. And Dan’s best friend is already in that jam with the protection racketeers. That’s not the sort of thing Dan Gannin will hold still for. Barney know that no matter what he says Dan will insist on handling things his way and that’s going to be awkward.

It’s a straightforward plot setup but there is a twist which Dan doesn’t know about yet.
Dan and Barney are both on the track of the guy behind the protection racket ad they both intend to find him first. 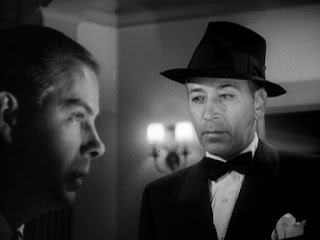 Director Edward L. Marin was enjoying a successful career up until his untimely death in 1951. He does a generally decent and occasionally inspired job here. He pulls off a couple of pretty decent set-pieces, including two very different and equally tense scenes on the same staircase.

As to being a film noir, there’s really not much of the noir visual style here.

Content-wise there’s not much noirness in evidence either, except perhaps in the sense that Dan is a guy who was just about to get out of the rackets when all this aggravation descended upon him. But there’s only just enough to make it film noir. It’s just a noir-tinged tough-guy crime thriller really. 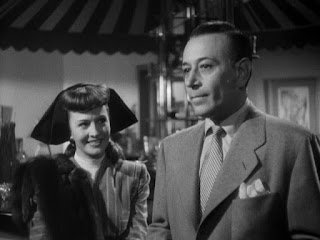 This is the sort of rôle George Raft carries off with effortless style. Raft had the ability to convince an audience that he was a seriously tough guy with a steak of ruthlessness but also a man who was fundamentally kind and generous. And that’s the sort of guy Dan Gannin is. If someone tries to push Dan around, well let’s just say he’s likely to push back,  but if you’re straight with him he’ll be the best friend you ever had. Dan is a likeable tough guy. His sensitive side is kept under wraps but Raft is good enough to make sure we know that that side is there.

William Bendix is pretty good as Barney, a very ordinary rather amiable cop who knows his job and takes it seriously. 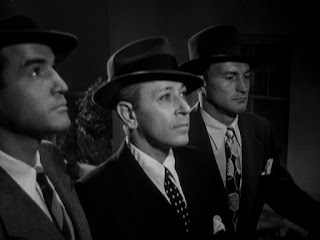 The Warner Archive release is what you expect - no extras but a very good transfer.

Race Street is minor-league stuff to be honest, with just not enough in the plot department to make it stand out. It’s the strong cast that carries it with Raft being particularly good. I like the gruff affection between Dan and Barney, guys who’ve been friends a long time.

Race Street is a competent crime melodrama. If you’re a George Raft completist like me you’ll want to buy it, otherwise it’s worth a rental. On the whole I liked it well enough.
Posted by dfordoom at 5:55 PM