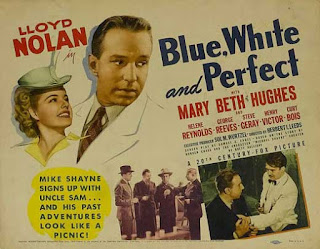 Blue, White and Perfect, released in 1942, was the fourth of the seven 20th Century-Fox B-movies featuring private eye Michael Shayne and starring Lloyd Nolan. After 20th Century-Fox lost interest in the series five more films (with Hugh Beaumont in the title rôle) were made by Poverty Row studio PRC in 1946.

The character had been created by Davis Dresser, writing under the pseudonym Brett Halliday. He wrote dozens of Mike Shayne novels between 1939 and 1958 and more were later written by various ghostwriters.

In the 50s there was also a Michael Shayne TV series and a radio series. 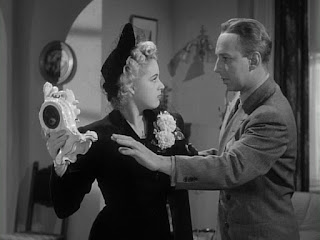 Mike Shayne (Nolan) has just had some bad news. His girlfriend Merle (Mary Beth Hughes) is getting married, but not to him. She’s fallen for a charming Frenchman. Mike will have to do something about this. Unfortunately Merle insists that he gives up the private detective business. He agrees and gets a job as a riveter with the Thomas Aircraft Company, or at least that’s what Merle thinks, but in fact the company has hired him as an investigator.

He’ll soon have plenty to investigate. The aircraft plant is absolutely riddled with German spies! We know straight away they’re German spies because they all have heavy German accents and they behave in a really sinister manner, just like German spies in the movies. The spies have stolen some industrial diamonds, essential for the war effort. 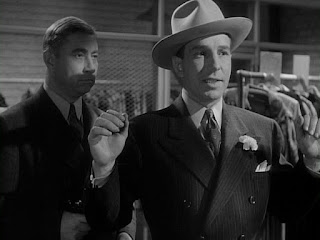 The spies intend to get the diamonds out of the country on the liner Princess Nola so Mike will have to take an ocean voyage to keep tabs on them. He’ll need money for that, so he cons it out of poor Merle. On the steamer he runs into an old friend, the glamorous Helen Shaw (Helene Reynolds). He also makes a new friend, Juan Arturo O’Hara (played be George Reeves, yes Superman himself). Whether Helen and Juan are mixed up in the spy business or just innocent bystanders remans to be seen. Mike is sure he’s on the right track with the spies because people keep trying to shoot him (Mike always sees that as a positive sign).

Shayne doesn’t really solve the case. He just manages to stay alive long enough to stumble over the solution. He can’t even be given credit for the staying alive part - it’s mostly just dumb luck. Which makes him strangely likeable. You can’t help wondering what his next mistake will be. 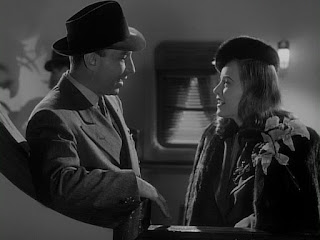 The Fox Mike Shayne movies were very lightweight and had a tendency at times to overdo the comedic elements. That’s less of a problem with this film. The focus is more heavily on the plot and it’s at least a little bit more hardboiled (but only a little) than other entries in the series. Lloyd Nolan is also much better when, as in this film, he tones the comedy down a bit. There’s still plenty of humour and plenty of wisecracks but he comes across as a moderately believable (if not very competent) private detective.

It needs to be admitted up front that Michael Shayne as played by Lloyd Nolan bears no resemblance at all to the Michael Shayne of the novels. None whatsoever.

Mary Beth Hughes is fine as the long-suffering Merle (she appeared in several movies in this series but as different characters). Helene Reynolds is very good as the glamorous woman who may or may not turn out to be a femme fatale. 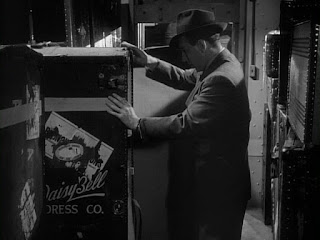 Fox released four of the Michael Shayne movies (with extremely nice transfers) in a DVD set a few years back. They even included some worthwhile extras. If you can find the set and you’re a B-movie fan and you don’t mind B-movies with strong comedic elements then it’s good value.

I’ve seen all four movies in this set and this might be the one I enjoyed most. Lightweight but recommended.

I’ve also reviewed Michael Shayne: Private Detective (1940), The Man Who Wouldn't Die (1942) and Sleepers West (1941). You might also be interested in my review of one of the novels, Murder Is My Business.