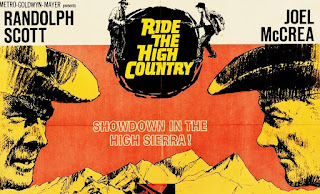 Ride the High Country, release in 1962, was Sam Peckinpah’s second feature film as director and it was the film that put him on the map.

Joel McCrea and Randolph Scott were both legendary stars from the glory days of the western and they were both at the tail end of their careers. This would be Scott’s last movie and McCrea did very little after this film. The casting was inspired since this is a movie about two men whose glory days are long behind them.

This is one of those “last days of the Wild West” movies. In the opening sequence we see a typical Old West town but there’s a motor car in the street. We assume that the film takes place in the first few years of the 20th century. The Wild West was starting to pass into legend.

Like the Wild West itself Steve Judd (Joel McCrea) is a relic of the past. He was once a famous lawman. Now he’s pushing sixty, he’s no longer famous and he works as a bank guard. His job is to escort gold bullion from a mining camp to a bank in town. Six miners have already been killed trying to get their gold to the bank.

When he was offered the job he was told he would be escorting a quarter of a million dollars’ worth of gold. Now he’s told it’s only $20,000 in gold (in fact it turns out to be even less which adds a nice little touch of futility to the story). The great days of gold rushes are over as well. The frontier, with its limitless possibilities, is a thing of the past. The future belongs to businessmen and book-keepers, not cowboys and gold prospectors and frontier lawmen. As we will see in the course of the movie even the classic western outlaw is now an anachronism.

To escort the gold Judd will need some help. That help is offered by his old friend, and one-time deputy, Gil Westrum (Randolph Scott). Gil suggests that his young protégé Heck Longtree might be useful to have along.

Gil and Heck are actually intending to steal the gold. Since Steve Judd is such a straight arrow that’s going to be awkward. Gil has no intention of killing Steve. He hopes to persuade him to see reason. If he points out to Steve that they’ve both faithfully served the law for decades and they have nothing to show for it then surely Steve can be persuaded to go along with their plan.

A major complication arises when they stop for a night’s lodging at Joshua Knudsen’s farm. Young Heck is hopelessly smitten by Knudsen’s daughter Elsa. Old Joshua disapproves. Old Joshua disapproves of pretty much everything except the Bible. Elsa has decided to run away but she wants to run away to the mining camp to marry miner Billy Hammond. She manages to convince Steve and Gil to take her to the mining camp. That’s where things get really complicated, Steve and his companions fall foul of the five Hammond brothers and their dispute with the brothers is destined to end bloodily. While this is going on Gil and Heck wait for their opportunity to make off with the gold.

Since this is a Peckinpah movie you expect that there will be a lot of bloodletting before the movie is over, and there is.

There’s also a complex pattern of conflicting and shifting loyalties and conflicting agendas. Steve and Gil are old comrades. Heck is Gil’s protégé, but he comes to admire Steve Judd. Heck wants the gold but he wants Elsa and he can’t have both. There are betrayals of trust but there are also new loyalties being forged.

Steve Judd and Gil Westrum are (like the hero of Peckinpah’s later Junior Bonner) adrift in time. The world they understand is vanishing and a new world is coming into existence, a world they don’t understand at all. And it’s a new world that has no use for broken-down forgotten western heroes.

There’s a melancholy tinge to the film, but without self-pity. There’s plenty of cynicism about human nature. The miners are not sturdy independent-minded pioneers. They’re moronic drunken cut-throats and they’re little better than animals, as Elsa finds out to her cost. Gil and Heck are thieves. Steve Judd is a walking anachronism. But mixed with the cynicism there’s an odd idealism as well. Friendships can be betrayed but friendship still matters. Love can be betrayed. But occasionally, when you least expect it, people behave decently and heroically.

This is cynicism but it’s not nihilism. People let you down because they’re human, not necessarily because they’re evil. Redemption is possible. Judd’s determination to do the right thing is both absurd and admirable.

Joel McCrea and Randolph Scott are superb. Oddly enough McCrea was originally cast as Gil with Scott cast as Judd but they decided to swap rôles. The fact that these two actors were themselves fading legends whose careers were coming to an end adds extra poignancy. It might also explain why they’re so good - they probably both knew that these would be the last great parts they would ever get so they gave everything they had.

Warren Oates makes the first of many appearances in Peckinpah films as one of the Hammond brothers.

While this was not a major production it’s certainly not a B-movie. It was shot in colour and Cinemascope. Lucien Ballard’s cinematography is impressive.

The Region 4 DVD offers a good anamorphic transfer with some extras - a Peckinpah documentary and an audio commentary by a panel of Peckinpah scholars. It’s now available on a Warner Archive Blu-Ray as well.

Ride the High Country is an intelligent grown-up western with plenty of psychological and emotional complexity, and plenty of action. Highly recommended.
Posted by dfordoom at 1:12 AM