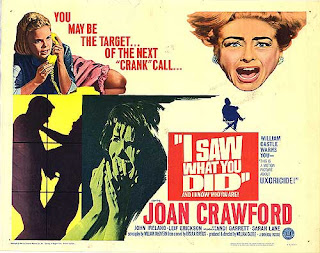 I Saw What You Did is a 1965 potboiler from the legendary low-budget horror schlockmeister William Castle but it’s a crime thriller rather than an out-and-out horror flick. It belongs to an interesting sub-genre - the telephone thriller.

Libby’s parents are going to be away overnight so she invites her friend Kit over. Libby lives just out of town. Her parents have a kind of hobby farm. It’s a nice place but it’s isolated and Libby gets a bit bored and lonely.

Libby and Kit amuse themselves by making prank phone calls. They pick a number and when someone answers they say, “I saw what you did. I know who you are.” It’s a game that affords them endless entertainment, especially if the person answering has got something to feel guilty about, like playing around with his secretary. But then they ring someone who has done something really wrong and really bad. He’s just committed a murder. And now he thinks there was a witness. 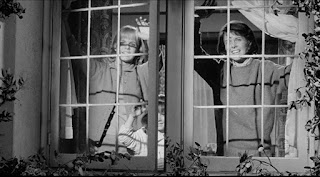 The opening sequences have already established that Libby and Kit are actually nice girls. They’re just young (they’re around fifteen or so) and indulging in harmless girlish pranks. This was 1965 and making prank phone calls was about as wicked as the average fifteen-year-old girl was likely to get (or at least that’s what Hollywood would have had us believe). They’re not girls who would ever intentionally hurt anybody. They could never imagine that anything bad could result from their pranks. Maybe they deserve to be grounded for a week. But now they could be in big trouble. Really big trouble. And they could be about to unwittingly get themselves in much deeper.

Of course they don’t yet know how much trouble they could get into. Being teenage girls they’re kinda boy-crazy but still pretty innocent. Since they picked the number out of the telephone book they really do know where the people they’re calling live and they think it would be tremendous fun to drive by his house to check him out - his voice sounds so sexy! Libby wonders whether she might even be able to find a way to meet him. Kit isn’t sure this is a good idea. But of course it’s all just a game. 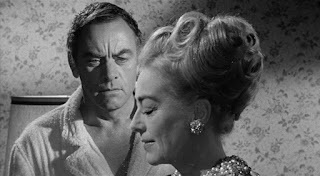 The killer is Steve (John Ireland), he’s just killed his young wife Judith and he’s emotionally entangled with his next-door neighbour Amy (Joan Crawford). He’s on the edge of violence most of the time and he’s the kind of guy who would certainly think nothing of killing an inconvenient witness., Of course there’s no way he could find out where Libby and Kit are, or could he?

To complicate matters the girls are baby-sitting Libby’s kid sister Tess, who has a habit of wandering off at the worst possible moments.

The suspense is pretty effective. William Castle wasn’t a very subtle film-maker but by this time he had plenty of experience in scaring audiences.

The screenplay is by William P. McGivern, a pretty good crime novelist (he wrote The Big Heat), and while it might seem a bit far-fetched it comes across as quite plausible. 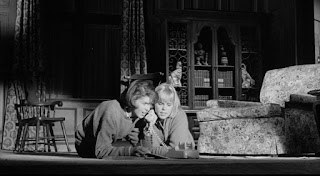 Joan Crawford of course gets top billing and she’s in fine form but hers is really more of a supporting part. John Ireland is reasonably solid.  But the real stars are the two girls, Andi Garrett (who plays Libby) and Sara Lane (who plays Kit). The movie stands or falls on their performances and they’re both terrific. Sadly neither went on to have real careers. Libby and Kit are believable. They’re almost grown up, but not quite. They think they’re ready to be treated as adults but they’re still a bit child-like in their inability to think through the consequences of their actions.

This is a William Castle film so it’s actually nowhere near as dark as the subject matter might suggest. He wants to give the audience some thrills and maybe a real scare or two (and he usually managed to do so) but mostly he wants us to have harmless fun. Those were the days when people actually made thrillers (and even horror movies) that were not meant to be harrowing exercises in depravity and degradation and misery. Castle was an old-fashioned showman with a love for gimmicks. 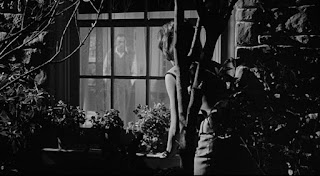 Universal’s DVD release is barebones but the transfer is very good.

This is good old-fashioned entertainment. You’re not meant to take it too seriously, you’re just meant to sit back and enjoy it. On that basis it works very well.

I Saw What You Did is highly recommended.
Posted by dfordoom at 10:33 PM