Playback is a 1962 entry in the prolific Merton Park Studio cycle of Edgar Wallace potboilers.

Dave Hollis (Barry Foster) is a young police constable hoping for a transfer to CID. Like so many young policemen he thinks being a detective would be much more glamorous than walking a beat. His troubles begin one night when he helps a young German woman named Lisa (played by Margit Saad) break into her own house - she locked her keys inside. He cuts his hand and she insists on bandaging it, and then she insists that he have a cop of coffee and then they start chatting. It’s all quite innocent and it’s just bad luck that while he’s supposed to be walking his beat a robbery occurs and he covers up by telling his sergeant a few white lies.

It is of course the first step on the road to ruin.

Lisa really is charming, and very attractive, but she’s married. Obviously the sensible thing for Dave to do is to forget the whole incident but it’s not easy to be sensible about charming attractive young women and he starts to see her regularly. Unluckily for Dave they pick a gambling club for their meetings and he starts losing heavily. 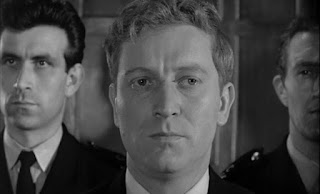 She’s not exactly happily married. She’s thought about leaving her husband Simon (George Pravda) but then she wouldn’t have any money. She’s not the sort of girl who likes the idea of not having any money. She tells Dave all her troubles. If only there was a way for them to get hold of a large amount of money they could go away together and be happy. And her husband has a great deal of money. A very great deal. Maybe there is a way?

So there’s a bit of a film noir vibe here. Hollis is a nice guy but his character is a bit weak, he’s a bit self-indulgent and his judgment is not too good. He’s also inclined to be led astray by beautiful women. These might not in normal circumstances be serious character flaws but if you add a femme fatale to the mix they’re enough to set him on the slippery slide into the noir nightmare world. In fact there’s quite a lot of film noir in this one. 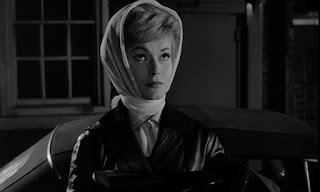 Playback is a bit like a low-rent Double Indemnity - a man and a woman who are both just waiting to be corrupted and when brought together their potential corruption blossoms.

It doesn’t take too long to figure out what is likely to happen but there are still plenty of nasty little plot twists waiting for us. 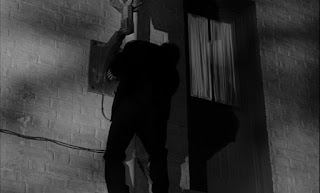 Barry Foster gives one of his best performances. There’s plenty of nuance. Dave is likeable enough on the surface but we quickly become aware of his character flaws. We feel some sympathy for him but we also feel that he’s chosen his fate. We can’t quite bring ourselves to feel too much respect for him.

Margit Saad is also excellent as the femme fatale Lisa. She’s not too obvious a femme fatale. We can see how Dave convinces himself that she’s a charming but unhappy woman, a victim of a loveless marriage, but we’re also a little suspicious of her.

Adding to our enjoyment is the wonderful Nigel Green as the owner of the gambling club. Dinsdale Landen is good as Dave’s pal Joe, another young policeman but one with a great deal more sense. 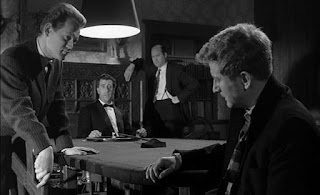 The screenplay (and it’s a very satisfying screenplay) is by Robert Banks Stewart who went on to have an extraordinarily successful career as a television writer. Director Quentin Lawrence spent most of his career in television as well but the handful of features he made included the excellent Cash on Demand for Hammer in 1961. Both that film and this one demonstrated that he could do suspense fairly well.

This one is included in Network’s Edgar Wallace Mysteries Volume 3 boxed set. The anamorphic transfer is extremely good.

Playback is a quite a nifty little example of the British film noir. And it really does tick most of the noir boxes - the protagonist brought down by his own weaknesses, the femme fatale, flashbacks, even some voiceover narration by the protagonist at the start.

Playback is highly recommended.
Posted by dfordoom at 12:02 PM