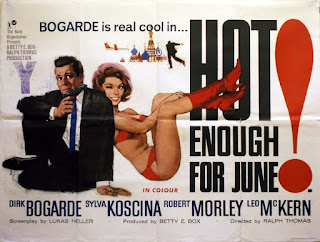 Hot Enough for June (also released as Agent 8¾) is a 1964 British spy spoof and it’s an amusing if rather low-key one.

Nicholas Whistler (Dirk Bogarde) is a writer. In other words he’s unemployed and unemployable. Or at least he was until the day he walked into the Labour Exchange and, to his amazement and horror, they offered him a job. As a junior executive in a glass-making firm. But actually he’s being offered a very different kind of job. As a spy. You see one of MI6’s top agents (a fellow with the codename 007) has unfortunately passed way and a replacement is needed. Whistler of course has no qualifications for a job as a secret agent except for one thing - he speaks Czech and MI6 desperately needs someone who speaks Czech for a mission to Prague.

Actually he’s not quite intended to step into 007’s shoes. The job is very routine. Just a courier job really. 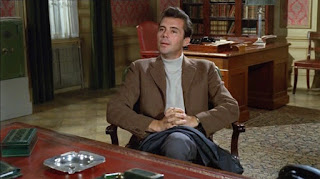 And MI6 spymaster Colonel Cunliffe (Robert Morley) doesn’t bother to tell Whistler that he’s been recruited as a spy. The poor fellow thinks he’s just on a business trip to see the latest developments at the State Glassmaking Works in Prague. He’s told that for political reasons he’ll have to be discreet. He’ll have to have the right password when he makes his contact, the password being “hot enough for June” but he doesn’t know who his contact is so he ends up saying “hot enough for June” to everyone he meets.

Whistler is a nice chap but rather naïve - he genuinely has no idea he is acting as a spy. Being a writer he has no experience of the real world so he figures that maybe the world of international business really is rather secretive. He does suspect that he may be involved in industrial espionage.

The Czech government has assigned him a driver to take him around Prague. Vlasta Simoneva (Sylva Koscina) is young and pretty so that part of his assignment is quite pleasant. 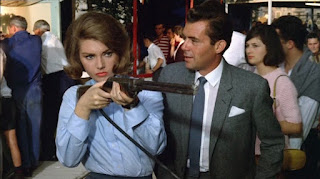 Whistler of course is a total washout as a spy and finds himself on the run. He may not be a good spy but he is a survivor and he manages to keep one step ahead of the secret police. But if he’s ever going to see England again he’s going to have to reach the British Embassy and that will be more of a challenge. Much depends on whether he can trust Vlasta. They’ve fallen in love (naturally) but she doesn’t want to betray her country and he doesn’t want to betray his.

While this movie was obviously cashing in on the Bond movie craze it isn’t really a Bond spoof. It’s more a spoof of the older style of spy thriller. There are no gadgets and no spectacular action sequences. The comedy 9and this movie is definitely intended as a comedy) is mostly sly and witty and gently satirical rather than outrageous. But it is funny. 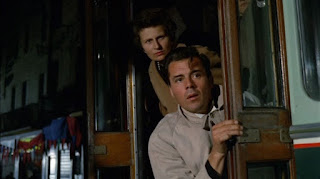 The elder Simoneva and Colonel Cunliffe are enemies but they’re also good friends. For both of them the spy business is a kind of game. They’re unscrupulous but not ruthless. This is a spy movie in which nobody gets killed, or even badly hurt.

We never do find out what was in the secret document that Whistler was supposed to bring back and that’s part of the point of the movie. It simply doesn’t matter. It’s just a game.

Rather surprisingly Dirk Bogarde made quite a few spy movies, including the very underrated and hard-to-find Sebastian in 1968 and the notorious Modesty Blaise in 1966. Bogarde was superb at this kind of light comedy. He plays Nicholas Whistler as a naïve but basically thoroughly decent sort of chap, a self-confessed coward but very likeable.

Sylva Koscina was one of the classic eurobabes of the 60s and she’s charming.

The byplay between Robert Morley and Leo McKern as the opposing spymasters is a major highlight - two wonderful actors having a great time with their rôles. 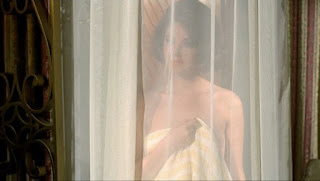 Along with Carry On Spying (released in the same year) this is one of the better spy comedies of its era.

Network’s DVD release offers a very good anamorphic transfer. The only extras are some image galleries.

Hot Enough for June is fine entertainment. It might be low-key but it’s consistently amusing. Highly recommended.
Posted by dfordoom at 4:12 PM