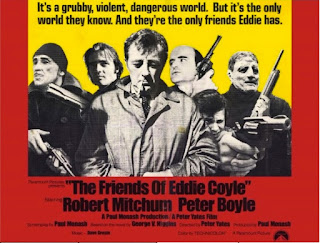 The Friends of Eddie Coyle is a gritty extremely bleak neo-noir crime drama directed by Peter Yates and released in 1973. It was based on the novel by George V. Higgins. It gives Robert Mitchum one of his best rôles of that decade (comparable to his superb performance in Farewell, My Lovely two years later).

Eddie Coyle (Mitchum) is a small-time Boston gangster with a problem. The problem is that he’s facing three to five years in New Hampshire for driving a truck filled with stolen goods and he can’t face the prospect of going inside again. The only way out is to turn informer. If he does that then maybe he can cut a deal and escape prison. Cop Dave Foley (Richard Jordan) hasn’t exactly promised him that but he has promised to do what he can. But only if Eddie can give him some really worthwhile information. The trick for Eddie is to give Foley enough to get a deal without getting himself killed by the people on whom he’s informing.

Eddie’s main line of work at the moment is buying the guns that are getting used in a series of bank robberies. 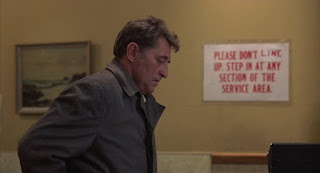 Eddie could definitely get a deal if he offered Foley the bank robbery gang but he doesn’t want to do that. That would mean informing on his friends. Maybe he can offer Foley Jackie Brown (Steven Keats). That’s the guy he gets the guns from. Jackie Brown is not a friend so informing on him would be OK.

Eddie isn’t the only one acting as an informer. This is an incredibly bleak and cynical look at the world of crime. Everybody will sell everybody else out if they have to. There’s no honour among thieves here. It’s just a matter of making sure you’re careful so you don’t pay the price of informing. That’s Eddie’s challenge. He doesn’t want to go to prison but he doesn’t want to get killed either.

There’s an overwhelming sense of futility in this film. These criminals really are losers. They’re not big-time gangsters. They’re not making enough money to live in mansions. They’re not living glamorous lives. Their lives are seedy and squalid. The guy selling the guns makes a deal to sell some machine-gins, which carries a mandatory life sentence if you get caught. And he’s getting two thousand dollars for the guns. He’s maybe making $1,500 profit. Not much money for which to risk a life sentence. 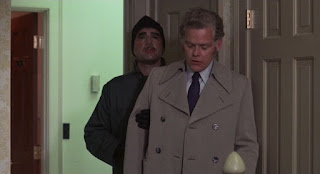 The bank robbery gang offers the same sense of futility, which offers an interesting contrast to the robbers in Yates’s celebrated 1967 British crime drama Robbery. In that film the criminals were going for a huge score which would have set them up for life. The bank robbers in The Friends of Eddie Coyle are robbing small suburban banks and they have to keep robbing them and sooner or later something will go wrong and they’ll get caught. Their jobs are just not all that well-planned. They’re just not that smart. When something does go wrong it’s entirely predictable. These guys are chronic under-achievers.

The job that Eddie did in New Hampshire that caused all his present woes was similarly futile. Eddie’s in his fifties, he knows he’s too old to do any more time, but he got mixed up in a job that just didn’t offer a big enough payoff to make it worthwhile. He didn’t make enough money to spend the rest of his life sitting on a beach in Rio. With the money he’s making from crime Eddie is just barely keeping his head above water financially.

All of these criminals seem to know that eventually they’re going to get caught, and they seem to just accept that. You wonder why they bother. They just seem to be too dumb to figure it out. They just accept their fates. 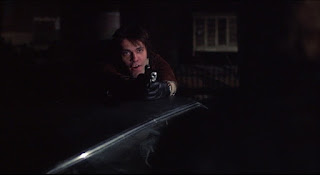 This may be the most unglamorous and most relentlessly downbeat crime picture ever made. It’s also unusual for a 1970s crime drama in featuring very little action and very little violence. We think there’s going to be a car chase but it doesn’t eventuate. As a result of all this it bombed at the box office. Which in retrospect is sad but unsurprising. Audiences wanted action or glamour or preferably both. They wanted car chases and shoot-outs. What they got in The Friends of Eddie Coyle was a depressing look at the sordid reality of small-time crime. Not only does crime pay very poorly for these guys it isn’t exciting. It’s just a boring dead-end job.

Mitchum gives a superb but very understated performance completely at odds with his tough guy persona. Eddie Coyle is an incredibly passive character. He just drifts along from minor disaster to minor disaster and seems resigned to being a failure. 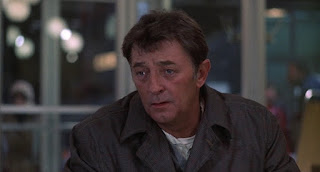 Eddie’s friends are a sorry lot. And the cops aren’t much better. Foley is as cynical as they are and uses people without a hint of remorse.

The Eureka Masters of Cinema offers the film on both Blu-Ray and DVD. The extras include a very sharp appreciation of the film by critic Glenn Kenny, a lengthy interview with Peter Yates and a 44-page booklet that includes an essay on the film.

Most successful neo-noirs deliberately avoid going for classic noir visuals because the noir visual style is just about impossible to achieve in colour. This film (along with Farewell, My Lovely) demonstrates that it can be done. The Friends of Eddie Coyle might just be the greatest of all neo-noirs.

Very highly recommended.
Posted by dfordoom at 2:00 AM