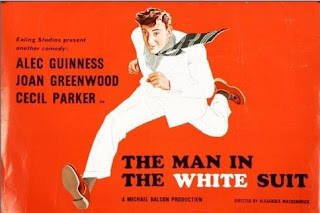 The Man in the White Suit, released in 1951, is one of the best-known of the Ealing comedies. It’s unusual in that it is also a science fiction film.

Sidney Stratton (Alec Guinness) is a brilliant young scientist with a special interest in textiles. He works in a textile mill. Well, he doesn’t exactly work there, he’s just bluffed his way into getting access to the mill’s laboratory. Everyone just assumes he’s one of the scientists working in the laboratory.

Now he’s made an amazing discovery. He has invented a new artificial fabric with some interesting properties. It never wears out and it never gets dirty. It actively repels dirt. Sidney believes it will revolutionise the textile industry and he’s convinced the owner of the mill, Mr Birnley (Cecil Parker) of that as well. 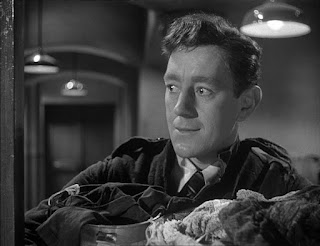 There is one small detail that Sidney and Mr Birnley have overlooked. A fabric that never wears out will not revolutionise the textile industry, it will destroy it. Nobody will ever need to replace their clothes. One suit could last a man for a lifetime.

It doesn’t take long for Birnley’s competitors, and the trade unions, to figure out just exactly how devastating Sidney’s invention will be. They decide that he must be stopped. They try to buy him off but it doesn’t work.

But somehow Sidney Stratton must be stopped. 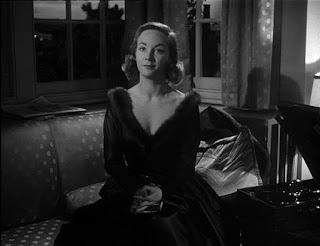 Sidney is brilliant but he doesn’t really understand how the real world works. He is a dreamer. He really thinks his invention will be a boon for the whole world. He’s an interesting variation on the mad scientist. He’s not the slightest bit mad and he’s not the slightest bit evil. He’s just a brilliant innocent. Alec Guinness is marvellous in the rôle. He plays Sidney as a very likeable young man but there is something very subtly disturbing about him - he is a loveable eccentric but he’s an obsessive and his innocence is positively terrifying and causes mayhem. 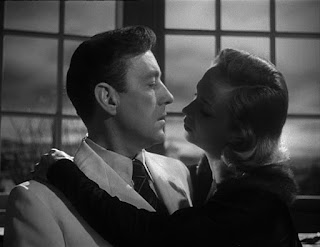 Alexander Mackendrick directed no less than five of the Ealing comedies, including the superb The Ladykillers. He then went to Hollywood where he directed Sweet Smell of Success. It’s now recognised as a truly great movie and one of the most impressive late entries in the American film noir cycle but at the time it bombed at the box office and pretty much ruined Mackendrick’s career. Mackendrick seemed to like making comedies with a bit of bite to them. This film confronts some important issues - progress is a good thing but it can come at a terrible price, sometimes the status quo really should be maintained, innocence can be more dangerous than cynicism, good intentions can lead to disaster. But The Man in the White Suit never falls into the trap of becoming preachy or didactic - it remains sparkling light-hearted fun.

This is a real science fiction film and it deals with some of the enduring themes of the genre - scientific progress as a two-edged sword, the dangers of worshipping science. 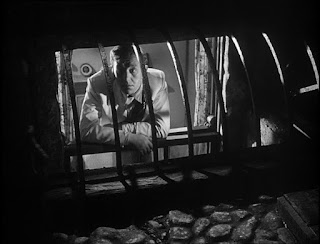 Like most of the Ealing comedies it’s visually impressive as well. The laboratory scenes are delightful, there’s a great chase scene at the end, there are numerous fine comic visual set-pieces. There’s also the characteristic Ealing mix of visual and verbal humour.

This is clever intelligent satirical filmmaking and it’s consistently funny. At times the comedy has an edge to it but it’s much too good-natured to be considered a black comedy. We can’t help liking Sidney but sometimes we just want to slap some sense into him.

Everything in The Man in the White Suit just works. Highly recommended.
Posted by dfordoom at 1:24 AM