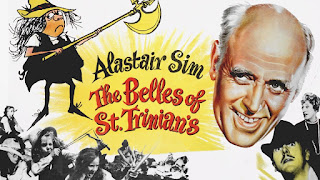 The Belles of St Trinian’s is a 1954 British comedy (starring the great Alastair Sim in a dual rôle) which was a huge box office hit and inspired no less than four sequels. It was based on the cartoons of Ronald Searle.

St Trinian’s is a school for young ladies in Barchester in England. Only the pupils are not exactly young ladies. To describe them as juvenile delinquents would scarcely be adequate. They’re more like a swarm of wild beasts, youthful gangsters, racketeers, con artists, terrorists and hardened criminals. They have been responsible for a county-wide reign of terror.

The school, run by Millicent Fritton (Alastair Sim), is teetering on the edge of bankruptcy but salvation may be at hand in the person the Princess Fatima (Lorna Henderson). Fatima is one of the seventeen daughters of a wealthy Arab oil sheikh. Miss Fritton hopes that young Fatima will be a goldmine. 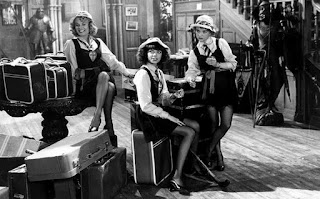 The Ministry of Education has sent two inspectors to find out what is happening at the school. Neither man has been heard from since. Now in desperation Mr Bassett (Richard Wattis) and Superintendent Bird have decided that they will try to infiltrate a policewoman into the school, posing as a games mistress. Superintendent Bird has persuaded his very reluctant girlfriend Sergeant Ruby Gates (Joyce Grenfell) to undertake this hazardous mission behind enemy lines.

She is alarmed by what she finds at St Trinian’s. The girls are operating a very lucrative business - they have a distillery set up in the chemistry lab. They’re heavily involved in gambling. She’s also concerned by the presence of Flash Harry (George Cole) who appears to be the frontman for the girls’ gambling and bootlegging operations. 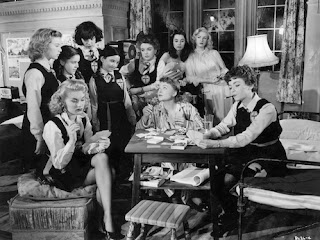 Millicent Fritton’s ne’er-do-well brother Clarence (Alastair Sim again), a bookie, persuades Miss Fritton to allow his daughter Arabella (Vivienne Martin), a young lady so terrifying that she was actually expelled from St Trinian’s, to return to the school. Clarence has a horse entered in a big race and Fatima’s father has a horse in that race as well. Clarence needs to know if the sheikh’s entrant, Arab Boy, is likely to be a threat to his own horse.

The plot revolves arounds the attempts by Clarence and the Sixth Form to nobble Arab Boy and the equally determined efforts of Miss Fritton and the Fourth Form to foil their schemes.

There’s also a hockey match. As Sergeant Gates observes, for the girls of St Trinian’s it’s more like jungle warfare than hockey with most of the opposing team ending up unconscious in the first aid tent. 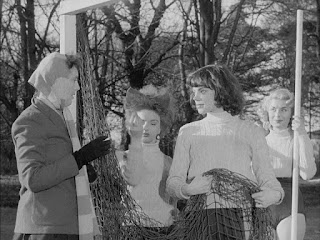 Alastair Sim is wonderful as always and there’s a galaxy of fine British comic talent all in top form with Joyce Grenfell and George Cole really shining but there’s Eric Pohlmann, Joan Sims, Beryl Reid and Sid James as well, and even Shirley Eaton and a very young Barbara Windsor in bit parts.

Frank Launder directed and co-wrote the screenplay with Sidney Gilliat. They had worked together as screenwriters on The Lady Vanishes and plenty of other notable films. Gilliat was also responsible for the screenplay of the bizarre but fascinating 1934 British musical Chu Chin Chow. 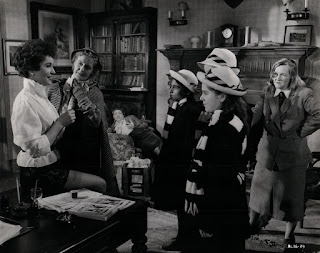 The comedy in The Belles of St Trinian’s is a mixture of slapstick and farce with flashes of verbal sophistication. What matters is that it’s consistently funny. It’s also a good-natured movie (despite the girls’ propensity for violence no-one gets seriously hurt). This is an example of anarchic British comedy at its best.

The Belles of St Trinian’s is enormous fun. Highly recommended.