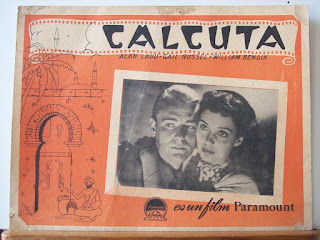 Calcutta is a Paramount crime drama directed by John Farrow and starring Alan Ladd. It belongs that interesting 1940s/1950s sub-genre of mystery thrillers (with hints of both film noir and adventure) in exotic settings.

The story takes place in Calcutta which is an interesting time for a movie in such a setting - a year before the independence of India and with China in turmoil as well (The Chinese Civil War would end in 1949). The movie was shot in 1945 (but not released until two years later) so it still has that wartime feel to it although the war is never mentioned directly.

Neale Gordon (Alan Ladd) and Pedro Blake (William Bendix) fly DC-3s for a Chinese airline. Their buddy Bill Cunningham flies for the same airline, until he gets murdered. He was strangled, with a Thuggee strangling cord. These three Americans have been close friends for years so there’s no way that Neale and Pedro are going to leave things to the police. They’re going to do some digging into this case on their own. 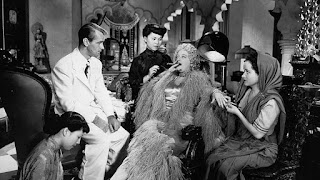 Bill Cunningham was about to be married, to a girl named Virginia Moore (Gail Russell). Which was a surprise, since none of these three Americans were guys you’d think of as the marrying kind. Neale is the kind of man who has a pretty sceptical view of women, especially women who have marriage on their minds, so he was both surprised and disturbed at the idea that some dame had managed to snare Bill (the idea that Bill and Virginia might simply have fallen in love doesn’t occur to his rather cynical mind).

Neale is also rather curious about the $8,000 diamond necklace that Bill had given Virginia. Bill never had that much money in his life. Neale is inclined to be suspicious of gambling club owner Eric Lasser (Lowell Gilmore) and an Indian businessman named Malik (Paul Singh), but then Neale is a suspicious kind of guy. He’s also inclined to be very suspicious of Virginia. His attitude towards Virginia oscillates back and forth. 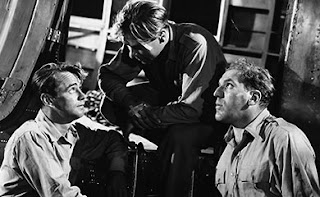 Of course in the process of trying to find out what Virginia knows Neale gets to see quite a bit of her. He might be cynical about women but he’s not immune to their feminine charms. This isn’t very pleasing to chanteuse Marina (June Duprez) who is crazy in love with Neale.

Neale discovers part of what’s going on, which involves smuggling, but he doesn’t know the crucial things and he doesn’t know if he can trust Virginia. And that could be dangerous.

Seton I. Miller’s screenplay has more than just hints of film noir. This is pretty close to full-blown noir but with a few interesting twists. Neale Gordon is a good man but his weakness is his excessive cynicism. He and his friends are leading reckless aimless lives and seem to be deliberately flirting with death (there’s a definite similarity here to the Howard Hawks aviation classic Only Angels Have Wings). If he could learn to trust women he might find happiness, but the difficulty is finding a woman who really can be trusted (this is film noir world and it does contain women who should be approached with extreme caution). 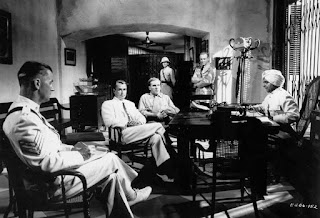 Alan Ladd is in fine form, in fact he’s at the top of his game. His performance here has all the qualities that allowed him to take Hollywood by storm in the 40s.

Gail Russell is perhaps an odd choice for a femme fatale rôle but the most dangerous femmes fatales are the ones who seem sweet and innocent, and of course she may not actually be a femme fatale. Neale Gordon isn’t sure if she’s a black widow or if she really is a sweet innocent girl and the viewer is kept guessing as well. Most people seem to dislike Russell’s performance but I think it works rather well.

June Duprez almost steals the picture as Marina. She might turn out to be the woman who saves Neale, or she might be a victim of his cynicism and of the dangerous world she inhabits. Duprez has a genuinely interesting screen presence.

William Bendix is solid, as are all the supporting players.

This is not Calcutta in India, it’s Calcutta on the Paramount backlot, but while the setting might not be authentically Indian it is authentically exotic. This is the Calcutta that exists in film noir world. 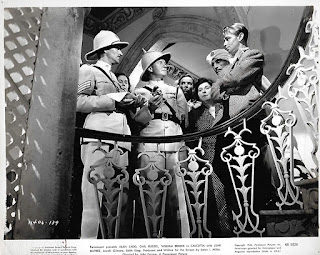 John Farrow was an exceptionally interesting director who deserves more recognition. He made some classic film noir including The Big Clock and Where Danger Lives, the Cornell Woolrich adaptation Night Has a Thousand Eyes (1948) and also the rather overheated but highly diverting Diana Dors vehicle The Unholy Wife (1957). He was particularly enamoured of very long takes which he always utilised effectively. Farrow is both underrated and slightly uncontroversial - a pious Catholic convert with a reputation for womanising and a man described by many of those who worked for him as a sadist.

Kino Lorber’s DVD offers a very good transfer and some extras including an audio commentary. It’s also available on Blu-Ray in the The Dark Side of Cinema IV boxed set.

Calcutta, which was reasonably successful at the box office, isn’t a great movie but I’m inclined to think that it’s been seriously underrated. It’s fine entertainment. Highly recommended.
Posted by dfordoom at 6:46 AM