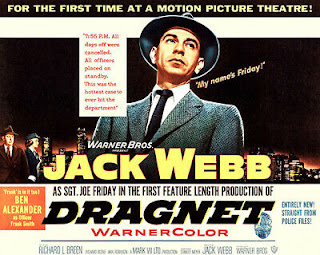 The Dragnet TV series (which ran from 1951 to 1959) having been such a huge success that Warner Brothers decided to fund a spin-off movie in 1954. This was not just episodes from the TV series strung together but an original movie, with the same stars (Jack Webb as Joe Friday and Ben Alexander as Frank Smith) and directed by Jack Webb. And done very much in the laconic police procedural style of the TV series. This was the first attempt at a movie spin-off from a TV series so nobody knew whether the pubic would accept the idea or not.

Minor gangland figure Miller Starkie gets cut in half by no less than four shotgun blasts. He was a collector for gangster Max Troy. Troy and his hoodlums are the obvious suspects but gathering the evidence to bring a case against them will require patient methodical work. Which just happens to be what Sergeant Joe Friday and his partner Frank Smith are very good at. 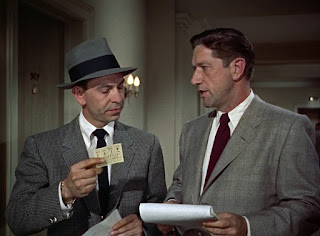 This is an inverted mystery. We know the identities of the guilty right from the start (which was not generally the case in the TV series). The cops are also practically certain of the identities of the guilty parties. What they don’t have is any evidence that would allow them to hold those parties, much less get indictments. Lots of interrogations follow. Leads have to be followed up. There’s a witness who saw something important but he’s a witness the police cannot depend on. Miller Starkie’s widow knows something but getting her to talk will be a challenge (and the questioning of Mrs Starkie provides the movie with a very effective emotional gut-punch).

The trigger man has to be found. He will be found but these things take time. 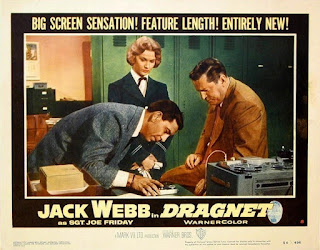 The cops in Dragnet don’t bother with imaginative theories and they don’t rely on sudden flashes of insight. There are procedures that have been proven to work. If you follow those procedures you’ll get a result. It doesn’t require brilliance or imagination. It just takes hard work and it uses up a lot of shoe leather but it’s a method that works a lot more reliably than imaginative theories and sudden flashes of insight. And it’s a method that works even if you’re just an ordinary reasonably competent cop. And the whole point of Dragnet is that Joe Friday is just an ordinary reasonably competent cop.

Friday is also a team player. He has no inclination to be a lone wolf or a maverick cop or to buck authority. He likes working as part of a team, because he knows that that is what works.

Jack Webb was a good director with an idiosyncratic style (which he invented) which worked perfectly for the TV series. He retains that style for the movie and it works here as well, and it gives the movie the same feel clipped hyper-realistic style. 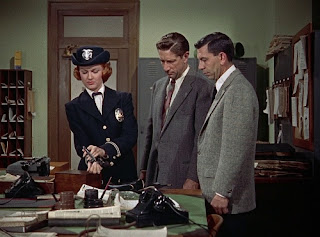 There is a bit more action than was offered in the TV series. There’s one fairly impressive extended fight scene (shot rather cleverly).

The Dragnet movie was shot quickly and for very little money (from his TV experience Webb knew how to shoot quickly and efficiently) and it was a major box-office hit. In fact it was insanely profitable.

Jack Webb’s style as an actor was idiosyncratic as well but it works for me. And, as in the TV series, there are occasional moments of offbeat humour between Friday and Smith (which usually involved Smith’s odd ideas about health). The rest of the cast mostly comprises people that Webb worked with regularly and knew he could rely on and they’re generally extremely good. And they understood Webb’s approach. 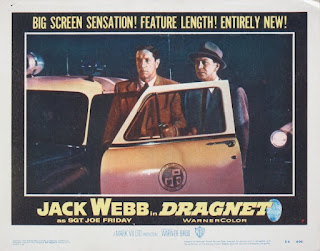 There’s a moment (which lasts about fifteen seconds) involving an undercover policewoman when there’s the tiniest hint that Friday might be capable of having romantic feelings. It does at least establish that he really does have normal human emotions.

The transfer on the Kino Lorber Blu-Ray is somewhat disappointing. It’s very uneven in quality, and at times the image is no better than VHS quality. Given Kino Lorber’s very good track record I assume that there were major problems with the source material which even a restoration couldn’t fix. At other times the image is excellent. The movie was shot in colour.

There’s an audio commentary from Toby Roan. Both 1.75:1 and 1.37:1 versions are included on the Blu-Ray but the movie was always intended to be screened widescreen.

If you love the TV series there’s no way you’re not going to love the movie. If you’re not familiar with the series it might just convert you into a fan. Highly recommended.
My review of the Dragnet TV series can be found here.
Posted by dfordoom at 10:26 PM