A Gunman Has Escaped is a British crime B-feature from 1948 and it’s a pretty obvious quota quickie.

A gang robs a jewellery store and a passer-by is shot during the robbery. The man may die.

It was Eddie Steele (John Harvey) who pulled the trigger. Eddie decides it would be a good idea to make himself scarce but he insists that two other members of the gang accompany him - he doesn’t trust them not to grass on him. Sinclair (John Fitzgerald) and Bill (Robert Cartland) aren’t thrilled by the idea that Eddie still has that gun and he’s short-tempered, not too stable and very insistent so they don’t have much choice.

The other members of the gang try to explain to Eddie that taking Sinclair and Bill with him is just going to make things easier for the police by making it much more likely that one of the three will be recognised but there’s no reasoning with Eddie.

The truth is that while he won’t admit it Eddie is pretty rattled. If that passer-by dies he could be heading for an appointment with the hangman. Eddie might be a tough buy but the thought of having a noose put around one’s neck is the sort of thing that would frighten anybody. 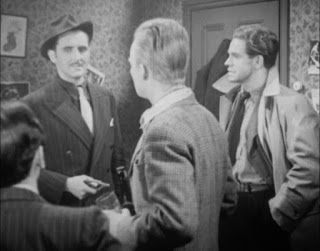 Eddie continues to do rash things. The three try to hitch a life but the truck driver gets suspicious so Eddie slugs him. As you would expect, once the truck driver comes around he contacts the police so the cops now know which direction in which their quarry is heading.

The three head for a farm, hoping to get some work and lie low for a while. Te farmer has a pretty daughter (played by Jane Arden) and it’s soon obvious that she and Bill are getting a bit sweet on each other. This doesn’t please Eddie. Eddie doesn’t trust women. He doesn’t even trust his girlfriend Goldie (Maria Charles). In fact he especially doesn’t trust Goldie. But then he doesn’t trust anybody. And he's right to be paranoid. 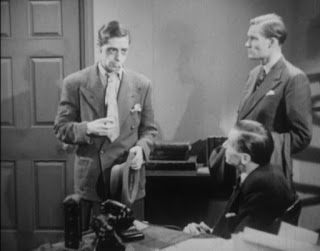 The news on the radio is not reassuring. The police seem to have some idea of the identities of the men they’re hunting and it appears that someone may have grassed on Eddie after all. It’s probably one of the other three members of the gang, the ones who didn’t come with Eddie. It could be Johnson or Red or Spike, or it could even be Goldie. Eddie is getting a bit paranoid by now.

Sinclair and Bill are getting a bit more worried by Eddie’s behaviour. Sinclair would cheerfully hand him over to the police if he could do so safely but he doesn’t dare do anything.

Of course we know it’s going to end badly for the crooks but we don’t know exactly how badly. 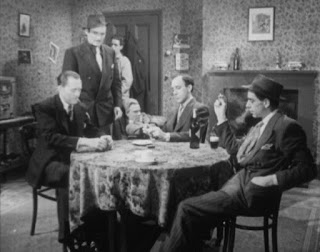 John Harvey is convincingly edgy and unpredictable and violent as Eddie. John Fitzgerald is very good as Sinclair, in some ways the most interesting member of the trio and the one we’d like to learn a bit more about. Sinclair is the odd man out. He’s a crook but he’s an educated and cultured man and he despises the low-class hoodlums that he’s associated with. Bill is just a typical minor criminal with an intense loyalty to Eddie.

John Gilling, who went on to an interesting career as a director, wrote the screenplay.

Producer-director Richard M. Grey is a rather obscure figure who had a very brief career. While he does a reasonably competent job here there’s nothing in A Gunman Has Escaped to suggest he was ever likely to have a distinguished career. 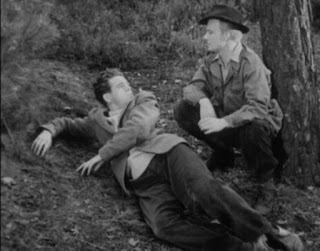 This is a relatively violent movie by 1948 British standards, with a higher body count than you might expect.

A Gunman Has Escaped is one of the nine feature films included in the Renown Pictures Crime Collection Volume 1 boxed set (a good value-for-money set). The transfer is pretty good. The set also includes the slightly odd but interesting Death Goes to School and the quite decent Murder at 3am.

If you don’t set your expectations too high and you keep in mind that this is a very cheap movie then A Gunman Has Escaped provides reasonably good entertainment. Recommended.
Posted by dfordoom at 4:44 AM