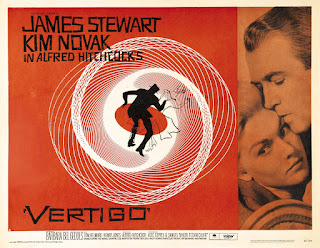 So I had to get to Vertigo eventually didn’t I? I can hardly claim to be re-immersing myself in the world of Hitchcock without revisiting this one.

Vertigo is now widely accepted as the greatest motion picture ever made. I’ve never been convinced that it’s even the best movie Hitchcock ever made (although I would have put it in my Hitchcock Top Five). I have always thought The 39 Steps, Strangers On a Train, Rear Window and Psycho were probably better movies in the sense that they’re more successful in achieving precisely what the director set out to achieve. But Vertigo is the one that gets under your skin. And watching Vertigo again might well change my mind about its status in the Hitchcock canon.

I can see why Vertigo did not do well at the box office. The first 45 minutes of the film would have left audiences bewildered, bored and disgruntled. If they were expecting a tense suspense thriller they would have been bitterly disappointed. And if you can’t grab the audience in the first 45 minutes you probably won’t grab them at all. That first three-quarters of an hour is absolutely crucial but you don’t understand that until later. You have to be in the right frame of mind to appreciate Vertigo. It just is not in any way, shape or form a conventional suspense thriller. You have to let yourself be drawn gradually into the film’s strange twisted dream-like world but you have to have the patience to let that happen.

He uses the same trick he would use in Psycho a couple of years later - what seems to be the climax of the movie happens halfway through. At which point the movie changes gears slightly. Then, shortly afterwards, with an hour or so of screen time remaining. Hitchcock explains the entire mystery plot in every detail. The mystery is entirely resolved. At which point Vertigo changes gears really dramatically and becomes a dark, disturbing psycho-sexual-emotional drama. 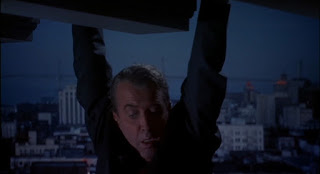 But while the audience now knows exactly what happened, Scotty doesn’t. So now the suspense kicks in. We fear something, but we have no idea what it is.

The plot is intricate. It’s far-fetched but it has its own internal logic. The plot is however not of overriding importance. What matters is the visual style that Hitchcock brings to the movie and the way he works through such favourite themes as fear, guilt, obsession, voyeurism, betrayal, suspicion, love and sex.

John “Scotty” Ferguson (James Stewart) is a cop. A sudden attack of vertigo on his part leds to the death of another cop. Scotty retires from the force. An old college friend, Gavin Elster, persuades Scotty to undertake an investigation for him, as a personal favourite. Gavin has the idea that his wife Madeleine (Kim Novak) thinks she is possessed by the soul of a long-dead woman. He fears that, like the long-dead woman, she may try to kill herself. Scotty follows Madeleine and has reason to believe she really is suicidal. He makes some serious errors of judgment, blinded by his increasing obsession with Madeleine. And then something happens that changes everything, for Scotty and for the viewer. Hitchcock has some major tricks up his sleeve. 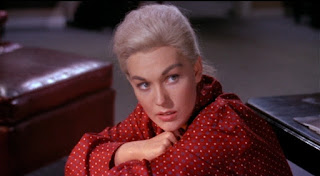 Strangely enough the first time I saw this movie I wasn’t very impressed by Kim Novak. Seeing it now I can appreciate the absolute perfection of her performance. In fact it’s one of the great screen performances.

James Stewart is very good as well, but the movie belongs to Kim Novak.

While Scotty becomes a really dark character in the second half of the film right from the start we have the feeling that he’s not quite right. From the moment that his vertigo causes the death of a fellow policeman he is riddled with guilt and self-recrimination. His judgment is questionable. He is becoming emotionally involved with a married woman. The idea that this might be wrong, or at least unwise, does not occur to him. Where does he expect his obsession to lead to? He doesn’t seem to know. He’s not thinking things out. He is so much in the grip of his obsession that he’s not thinking at all. He also, throughout the movie, seem to just assume that she will go along with his obsession. If it’s what he wants then she must want it too. 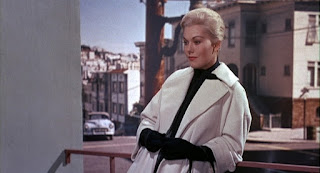 There’s plenty of the trademark Hitchcock interest in voyeurism in this movie. Scotty has to tail Madeleine, it’s what he’s been hired to do, but there’s a definite voyeuristic edge to the way he does it. And he’s already hypnotised by her beauty. His sexual and romantic obsession with her the moment he first set eyes on her. We get the feeling that even if his client decided to take him off the case Scotty would probably keep following Madeleine anyway. As always with the voyeurism in Hitchcock there’s the complication that the voyeur may be entirely misinterpreting what he sees. It’s significant that there are so many mirrors in the movie - mirrors show us reality, but in reverse, which is often how Scotty sees things. 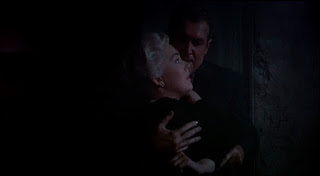 And he gets away with some subtle sexual hints. When Scotty fishes Madeleine out of the water half-drowned you might think that the logical thing to do would be to take her to a hospital or to a doctor. Instead he takes her back to his apartment. He doesn’t call a doctor. It’s also obvious that he has undressed Madeleine before putting her to bed. Madeleine certainly notices, when she wakes up, that she is naked. Obviously he had to get her out of her wet clothes but in 1958 you might think that the obvious thing for a man to do in such a situation would be to phone a female friend (he could easily have phoned Midge and told her he had a half-drowned girl in his apartment and could she come over). So we know that Scotty has now seen Madeleine naked, Madeleine knows it, and Hitchcock makes sure that we know it, which adds to the voyeuristic quality of Scotty’s shadowing of Madeleine. It’s also a subtle indication that Scotty is starting to think of Madeleine as belonging to him in some way. 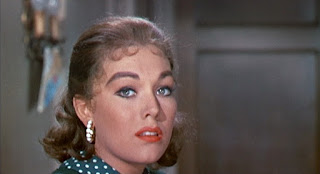 Many many movies have been influenced by Hitchcock over the years but few have been so obviously influenced as Paul Verhoeven’s Basic Instinct (which I re-watched recently) and it’s clear that Vertigo was the major influence in that case. There are not only striking stylistic affinities but lots of thematic links. And of course Sharon Stone is made to look exactly like Kim Novak (which is wonderfully apt considering the subject matter of Vertigo).

The Vertigo Blu-Ray includes an audio commentary by William Friedkin. He makes the interesting point that the McKittrick Hotel set used in Vertigo appears to be the same set, re-dressed, used as the interior of the Bates house in Psycho. There are lots of other extras as well. The movie looks superb on Blu-Ray.

Having now seen the film for the third time I’m inclined to think I was wrong. Vertigo really is Hitchcock’s greatest movie. And yes, it just might be one of the greatest movies of all time, possibly in the top five.
Posted by dfordoom at 11:28 PM