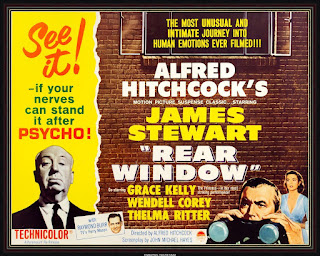 There aren’t too many films more daunting to review than Alfred Hitchcock’s Rear Window, released by Paramount in 1954. It is almost universally regarded as one of Hitchcock’s best films (there are those who rate it as his best) and apart from Vertigo it’s unlikely that any Hitchcock movie has had so much written about it.

The plot is simple and since there are very few people who haven’t seen this movie it can be disposed of quickly. L.B. “Jeff” Jeffries (James Stewart) is a news photographer recuperating from a broken leg. He’s basically immobile and he’s bored and grumpy. His only amusement is watching the neighbours in the apartment building opposite. He thinks he sees a murder and the question then is what to do about it and how to convince the police that there really has been a murder. His girlfriend Lisa (Grace Kelly) gets caught up in the drama that then unfolds.

That this is a movie about voyeurism is of course perfectly obvious, and it’s equally obvious that not only is Jeff a voyeur, we in the audience become voyeurs as well. As does Hitchcock. But then movie-making and movie-viewing are essentially voyeuristic. This movie does go a bit beyond that - what matters is that voyeurs often misunderstand what they see. 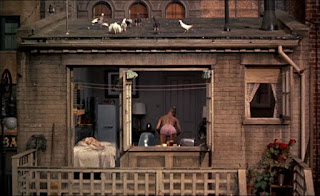 It has to be emphasised that Jeff is not just a guy who happens to notice the goings-on in the apartments opposite. He watches his neighbours obsessively. And given that several of those neighbours are attractive young women who are often unaware that they are being observed while they wander about their apartments half-naked (and we assume that at times they’re probably completely naked) it’s fair to say that there is an element of sexual voyeurism in Jeff’s apartment-watching activities. Hitchcock emphasises this right at the start by including what is as close as you’ll get in a 1954 Hollywood movie to a nude scene. Although the woman (Jeff refers to her as Miss Torso) has her back to the camera she is clearly topless. It’s an important moment because Hitchcock is making it quite clear that one of the attractions of this voyeurism hobby for Jeff is seeing young ladies naked.

The 50s was the decade in which Jimmy Stewart shed his wholesome homespun image and started taking darker rôles for directors such as Hitchcock and Anthony Mann. Often very dark rôles. This change of image started badly with Stewart being horribly miscast in Hitchcock’s Rope and making a complete hash of his performance. By 1954 Stewart had however discovered how to really burrow into the darkest recesses of the souls of his characters.

Let’s be honest. Jeff is not a nice guy. Given his frustration at his immobility we can perhaps excuse his being bad-tempered but he is frequently cruel to Lisa. She is a woman whose feelings are easily hurt and Jeff seems to delight in hurting her. OK, we get it that he is worried about being trapped into marriage (he hates the idea of giving up his globe-trotting lifestyle as a roving press photographer) but he’s obviously keen to continue the relationship without marrying her. This was 1954, when married couples in Hollywood movies still slept in separate beds, so we can’t be given any indication that Jeff and Lisa might be sleeping together. Even if we forgive him for stringing her along it’s hard to forgive him for being rather nasty about it. 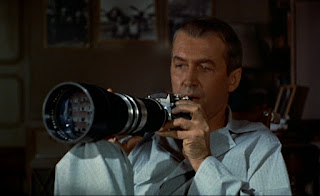 One thing you have to do with Hollywood movies made during the days of the Production Code is read between the lines when it comes to personal relationships. The relationship between Jeff and Lisa had to be portrayed, on the surface, in a way that would not upset the moral busybodies of the time. So, on the surface, Jess has been too busy with his career to be distracted by sex and Lisa is a virgin who is saving herself for her wedding night. Given the social milieus that Jeff and Lisa inhabit we might be inclined to be very sceptical that their relationship has remained non-sexual. There is one tantalising hint. When Lisa makes her first appearance in the movie she just suddenly appears in Jeff’s apartment while he’s dozing. The most logical explanation is that she has a key and she let herself in, which would imply that their relationship is more intimate than it appears to be on the surface.

Hitchcock teases us about their relationship. Lisa decides to stay the night in Jeff’s apartment and we’re obviously meant to doubt whether they’re going to be able to keep their hands off each other. Hitchcock wasn’t allowed to be overt about sex but he sure knew how to tease. 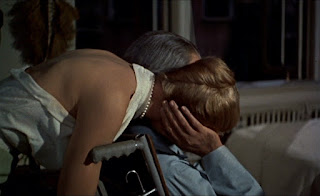 Jeff is a middle-aged man who wants the carefree irresponsible lifestyle of youth. And of course he’s a Peeping Tom. So not a very sympathetic character at all, although he does soften as the film progresses. Maybe he starts to grow up, or maybe his feelings towards Lisa become a bit more protective.

Rear Window resembles Suspicion in being a movie about the obsessive nature of suspicion and the way it grows, often based on very thin evidence. If we could all see glimpses into other people’s private lives we would probably misinterpret everything we saw and construct wild fantasies about those people’s lives. Jumping to conclusions is human nature.

Rear Window is also about relationships and the difficulty of finding a relationship that satisfies both parties. In those apartment that Jeff watches there are failed marriages, stormy marriages, lonely people who wish they were married and happy marriages. Jeff’s conclusions about the lives of the people he watches are usually wrong. He likes watching people but he doesn’t understand them too well. He certainly doesn’t understand women. He will have to learn to understand Lisa. 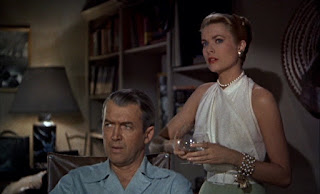 And maybe Lisa needs to learn a bit more about Jeff. At the end we’re left thinking that maybe they’ll learn to compromise, and maybe they won’t. Their love has been strengthened but we can’t help feeling that they’re still wildly incompatible.

Rear Window is of course a technical triumph. That huge amazing set was built was knocking out the floor of a sound stage - they needed the basement as well to accommodate the set. What really matters is the way Hitchcock uses that set. He uses it to give us information but the information is sometimes deliberately misleading. Like Jeff we can watch these people but we’re likely to misinterpret what we see.

One of the things that I find really intriguing is that at the end of the movie we don’t know much more about Jeff’s neighbours than we knew at the beginning. We’re still only seeing them through Jeff’s eyes and he’s been wrong before. We get what appears to be a resolution of Miss Torso’s story but it’s actually very very ambiguous. We never hear Thorvald’s side of the story. And most crucially we don’t even know if Jeff and Lisa are going to get married or whether their relationship has a future. We don’t get a neat Hollywood resolution for anything.

This is a movie about murder, sex and love. Three things that Hitchcock was extremely interested in (and of course he knew that audiences shared these interests). And it’s just about perfect.